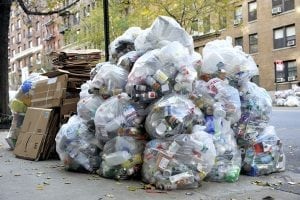 In certain circumstances, having households bag recyclables and leave them at the curb might be a better option than using carts or bins.

“This study finds that there are demonstrable opportunities for cost savings at a comparable (or higher) level of recycling performance for municipalities who implement bag-based programs,” according to the report. “However, there is no one solution for every jurisdiction – careful consideration must be given to all options, with site- and situation-specific factors being accounted for.”

The research was funded by Clorox Company, which retained the university to evaluate the merits of bag-based programs. According to the report, Clorox “gave the research team complete discretion and latitude with respect to how the study was to be conducted and the results communicated.” The Clorox Company owns Glad brand garbage and recycling bags.

The study involved a review of industry data and surveys with recycling system operators in Canada. It was released June 13.

“The underlying intuition for why this occurs is largely rooted in behavioral theory – clear bags (where neighbors/waste collectors can see what is being disposed) discourages willful contamination because of normative (peer) pressures,” according to the report. “People don’t want to be seen as not participating in an environmentally beneficial activity such as recycling, and thus, are incented (or coerced) to correctly sort recyclables.”

The report emphasized bags can add incremental capacity at a low cost when used alongside carts or bins – essentially giving households the ability to use bags as an overflow for their recyclables.

Surveys of 22 recycling operators showed officials are supportive of adopting bags under certain conditions, including that they get external money to buy bag breakers for their MRFs. Yet municipal and private operators felt the reduced incidences of workplace injuries and decreased labor time make carts a better option (it’s also important to note that many facility operators cite plastic bags in the recycling stream as a major problem because the items wrap around screens and other equipment, causing downtime).

The reports notes that, in some cases, a causal relationship couldn’t be established between bags and the certain performance benefits. It also notes the survey return numbers were too low to make survey responses statistically significant.

The report was authored by Calvin Lakhan, a postdoctoral fellow in the Faculty of Environmental Studies at York University.