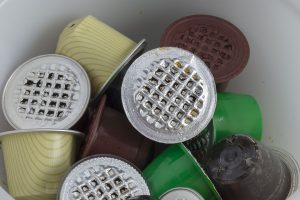 A Nespresso-backed recycling program for single-use aluminum coffee capsules has moved from the ‘burbs to the big city in British Columbia.

Vancouver, B.C. residents now have curbside access for their Nespresso single-use coffee pods via a brand owner-funded collection program. The program, which began March 1, is the next step in a pilot project started in the much-smaller British Columbia cities of Coquitlam and Anmore.

Nespresso launched the program in Vancouver, a city of 630,000 people, in partnership with Recycle BC. Formerly known as Multi-Material BC, Recycle BC is the extended producer responsibility (EPR) program for printed paper and packaging in the Canadian province.

“I think the response we got initially from the Nespresso customers is pretty positive,” said Allen Langdon, managing director of Recycle BC. “They really like the program.”

Consumers can pick up green bags for free at Nespresso coffee pod sales locations. They’re then asked to put about used 100 pods in each bag before sealing and dropping them in their curbside receptacles. The container sorting facility serving the province removes the bags on the pre-sort line.

For the time being, the bags are then shipped to Montreal, where specialized equipment purchased by Nespresso is separating the coffee grounds from the aluminum. This is done by a machine with high-impact paddles, which knock the coffee ground out of the pods. The aluminum is then baled and shipped for recycling, and the grounds are sent for composting. While its quality is not as high as UBC aluminum, the coffee pod metal is a good grade, Langdon said.

Recycle BC’s program also accepts plastic K-Cups for recycling through a partnership with Keurig Green Mountain. For the plastic pods, consumers are instructed to remove foils tops and coffee grounds before placing them loose into bins.

The Vancouver Nespresso pilot project is scheduled to last for six months, at which point officials will evaluate the next steps. Depending on the success of the pilot project, the partners hope to expand it across the entire province within a year.

Nespresso and Green By Nature are exploring siting a coffee grounds-aluminum separation machine in British Columbia, too, Langdon said. Green By Nature is contracted by Recycle BC to manage transportation, sorting and marketing of recyclables  in the province.

“If the program continues, it doesn’t make sense to continue shipping them to Montreal, that’s for sure,” he said.

The success of the pilot program will depend largely on consumers’ participation, including how many use the program and whether they use the bags properly, Langdon said. Managers also want to see if bags can be recovered without a significant number of breakages.

Langdon said one of the biggest concerns is ensuring people use the plastic bags and refrain from throwing pods into receptacles individually because they know the pods accepted in the program now.

“With all of the concerns around contaminations and China, we certainly don’t want to have increased contamination, particularly with organic material,” he said.