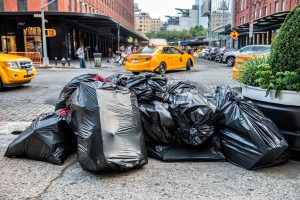 New York City is moving forward with a plan to shift the financial burden of garbage collection from taxpayers to ratepayers.

America’s largest city uses tax revenues to pay to collect and ship garbage out of the city. As a result, garbage service feels free to many households. A PAYT program, which the city is calling “save as you throw,” would give households financial incentive to move materials from their garbage to recycling. Households would pay a rate for garbage service, with larger garbage volumes costing them more.

Details on how such a program would work in a city dominated by renters in apartment buildings have yet to be determined.

CBS New York reported the New York Department of Sanitation (DSNY) recently held a public hearing on the $1 million contract with RRS. The contract was approved.

Resource Recycling reported in June 2017 DSNY was exploring a PAYT system, among other changes aimed at boosting the city’s recycling rate.