Industry heavyweights have their say on China 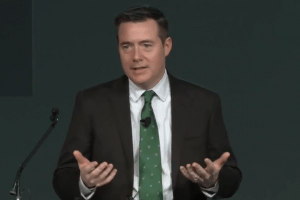 Leaders from Waste Management and two giant consumers of recovered fiber last week detailed the variety of ways their operations have been impacted by recent import shifts in Asia. They also laid out some ideas to help lift material quality.

In their comments at the Waste Management Sustainability Forum, the executives indicated that responding to Chinese restrictions will take system-wide improvements.

“Whether we sell material into China, into India, or into Indiana or Louisiana, it shouldn’t matter: Our customers expect materials of high quality and they deserve that,” said Brent Bell, vice president of recycling for Waste Management.

In the “Market Trends and Technologies” session at the forum, Bell was joined by Ross Li, executive director of China-based Lee & Man Paper Manufacturing, and Myles Cohen, president of Pratt Recycling. Their panel was one of several that took place at the Waste Management event in Arizona on Feb. 1.

WM focus on robotics and relationships

At the forum, Waste Management laid out some noteworthy statistics, including the fact that until recently, Waste Management was moving 30 percent of its recyclables to export markets, with China as the largest. The company is the seventh largest exporter by container volume in the U.S., and the six ahead of it are Chinese mill buyers in the U.S.

Technology is and will continue to a big part of the push to clean up the stream, Bell said. This focus includes outreach over social media and major equipment installations inside MRFs.

In late 2017, WM installed its first robotic unit, integrating the device into a MRF outside Houston. Bell said robot technology has the potential to substantially change the recycling industry in a few years’ time.

“We’re testing it now, but it definitely will make cleaner material and it will make our plant more efficient,” he said.

Bell also noted that amid the current market turmoil, the company has started actively looking to develop relationships with buyers that make “recycled content” a part of their branding. He said those partners will be less likely to significantly reduce their commitment to recycled material when pricing shifts.

That mentality drove Waste Management to partner with companies such as KW Plastics, a longtime customer that purchases recovered polypropylene, and Unifi, which takes recycled plastics and converts them for use as Repreve yarn that goes into clothing, automobiles and more.

“They’re not going to go back to ever using virgin-based material,” Bell explained. “They’re going to use recycled material because that’s what’s in their branding.”

As for Lee & Man in China, Li said the company is in the process of going back to the drawing board to reformulate a strategy for acquiring feedstock. 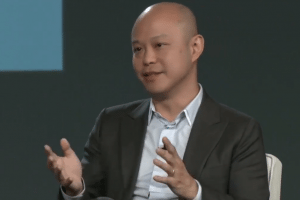 “It’s everybody’s guess about what the next step should be,” he said, noting China’s import ban on certain recyclables and associated regulations came as a surprise to his company, even though it is a major fiber user inside China.

Import permits, which are now a key indicator of the Chinese policies at work, have never raised much attention before now among Chinese mills, said Li. The company operates five mills in China, where it is the second-largest purchaser of recovered fiber, and it also recently built a production plant in Vietnam.

Before May 2017, mills were essentially issued enough permits to bring in sufficient amounts of material. But recently, with the government declining to issue permits, the licensing process has taken on new meaning, Li said.

The new regulations limit permits in several ways, Li explained. First, China wants to restrict the overall amount of waste coming into China, and is doing so by reducing the import quota of each mill by various amounts. In part, the amount is based on environmental inspections that have ramped up over the past six months.

“Basically, the score you get equates to how much those licenses get reduced,” Li said.

Although specific figures have varied from mill to mill, Li estimated a typical mill has seen its approved import allotments cut by 15 to 20 percent amid the recent import activity from the Chinese government.

The slashed import quotas are on top of the upcoming March 1 crackdown on quality, which restricts contaminants to 0.5 percent. Li described that figure as a “very significant” change due to its potential to restrict OCC imports, which are not banned outright.

Lee & Man has a capacity of about 5 million tons per year, and sources 6 million tons of recovered paper to fill that demand.

Myles Cohen, president of Pratt Recycling, told Resource Recycling last summer that the China restrictions presented an opportunity for domestic markets. Speaking at the Waste Management forum, Cohen was blunt about what should be done to make sure that happens: Local recycling programs need to be more judicious about adding materials. 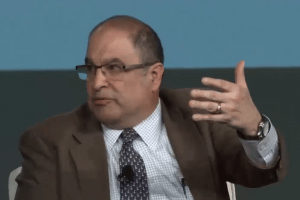 “We need a moratorium on new items,” he said, advising program leaders to focus mainly on paper, cardboard, bottles and cans.

He pointed to contamination as the major hindrance to recycling in the U.S., claiming some municipal programs have as much as 50 percent contamination in their recycling streams. If that gets much worse, he said, it could jeopardize the entire industry.

“Once consumers see that and recognize that, they will lose faith in the recycling system in the U.S.,” Cohen said. “And that will be a shame; we’ve come a long way.”

He also described companies receiving pressure from consumers and advocacy groups to make their products recyclable, and said that fact can also be damaging to the system.

“A lot of those trade organizations or companies make a case that sounds like a good case for recyclability, but the reality of it is if it’s paper in a lot of those cases, the material doesn’t pulp, or it adds contamination and ruins good materials,” Cohen explained.