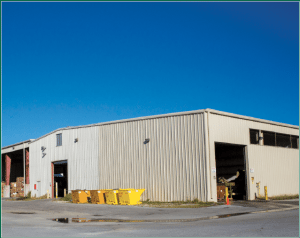 The largest Marine Corps base on the East Coast, Camp Lejeune covers 246 square miles and is home to about 170,000 residents, both military and civilian. It has stores, restaurants, schools, a library and more.

In short, it’s a city, and cities generate garbage and recyclables.

“A QRP maximizes the amount of solid waste diverted from landfills by increasing recycling, supporting green procurement policies, increasing public awareness and [engaging in] outreach related to waste minimization and recycling operations,” according to a program description. 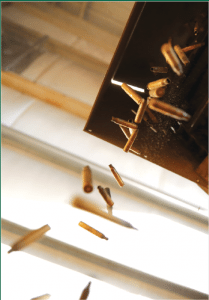 The facility also recovers steel cans, but it doesn’t currently have a market for plastics and glass, said Alicia Filzen, QRP manager.

The facility is located near the base’s non-hazardous industrial solid waste landfill and a treatment and processing (T&P) facility. Incoming recyclables are first weighed before they are diverted to either the MRF or the T&P facility.

The MRF uses a manual sorting approach. Equipment includes an Excel baler, as well as a machine that’s unlikely to be found in any civilian MRF: a small arms inert certifier and deformer.

The facility also includes a paper shredder to destroy “For Official Use Only” documents, and it stores used toner cartridges before they’re sold. 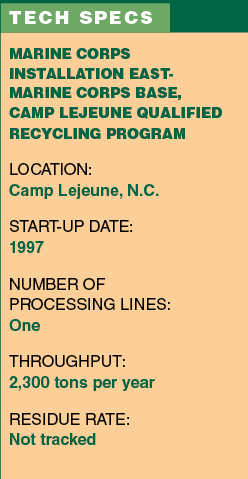 The QRP generates about $1 million in revenue from commodity sales annually, and the vast majority comes from the sale of brass casings.

As will sound familiar to recycling professionals in the civilian world, the MRF’s biggest issue is dealing with contamination.

Construction and demolition debris go to the T&P facility, an 11-acre parcel where scrap metal is recycled, concrete crushed, wood waste chipped and other organics composted.

The crushed concrete is used for training roads on the base, including tank trails, beneficial fill and other purposes. Doing so saves transportation of the C&D debris to the nearest C&D landfill, which is about 50 miles away. Shredded wood is used as mulch or transferred off-site for use as boiler fuel.

QRP uses a 2.5-acre section of the T&P site for composting yard debris and manure. The mulch and compost products are available to the public free of charge.

The MRF has three employees working on one shift Monday through Friday.