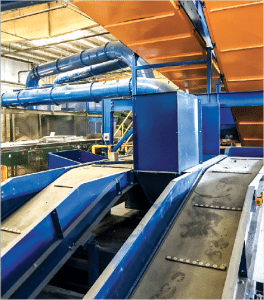 This Frankenstein does anything but scare the townspeople.

Assembled from equipment made by a variety of companies, the Boulder County Recycling Center is a key to the county’s goal of achieving zero waste – “or darn near,” as county staff say – by 2025.

The facility has one line that predominantly runs single-stream material from residential and commercial sources. It does some direct baling as well. Of the 52,572 tons that flowed through the MRF last year, about 62 percent was fiber, 16 percent glass and 22 percent other containers and commingled materials. Materials comes from curbsides in several Colorado communities: Boulder, Broomfield, Fort Collins, Lafayette, Longmont, Louisville and Mead. The MRF also has trucks deliver material from routes in Allenspark, Lyons, Nederland, Niwot and unincorporated Boulder, Gilpin, Larimer and Weld Counties.

To send bales to downstream markets, the Boulder County Recycling Center utilizes a rail spur. Rail cars can each hold 88 bales, or about 60 tons, depending on the material and bale sizes. Each rail car eliminates the need for three tractor-trailers. 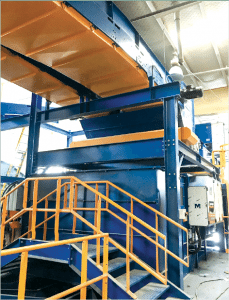 Owned by Boulder County government, the MRF is operated by nonprofit group Eco-Cycle, which also operates a nearby Center for Hard-to-Recycle Materials (ChaRM). The county recently awarded a new contract to Eco-Cycle to continue operating the 16-year-old facility.

Earlier this year, the MRF underwent a $2.8 million upgrade by Plessisville, Quebec-based equipment provider Machinex. The project was funded by a now-expired recycling tax and a grant from the Carton Council.

The project involved installing two MACH Hyspec optical sorters. The first one ejects PET and PP, and the second one ejects HDPE and mixed plastics. The project also included replacing an eddy current separator with a larger Machinex Eddy Current. That separator, which is twice the size of the old one, has enabled up to 90 percent recovery of UBCs.

“Aluminum is our most valuable commodity, so it’s a big deal for us to be able to increase our recovery rate for that item,” Arians said.

The retrofit has reduced the Boulder County Recycling Center’s reliance on manual sorting, allowing it to replace eight sorters on the container line.

That has helped address one of the biggest challenges facing the MRF: staffing. As some other MRFs are also reporting, the facility is finding it hard to hire and retain labor during this period of low unemployment. Boulder County also has a high cost of living, exacerbating the situation.

“In order to address this, we are implementing lean management at our facility, which promotes cross-training and internal promotion opportunities for all levels of staff,” she said.

Lastly, the revamp has boosted the MRF’s recovery capabilities. Starting Oct. 1, residents were able to begin tossing a broader array of materials into their carts, including plastic clamshells, flat plastic tub lids and rigid plastics such as buckets and backyard toys with metal components removed. The additions to the accepted materials list are expected to boost throughput from 25 to 28 tons per hour.

Much like the fictional Frankenstein, the facility itself is made up of reused and recycled parts.

The building has been built both to conserve energy and to generate it. Along with utilizing natural lighting techniques, thick building insulation and other energy-efficiency measures, the MRF sports 1,256 solar panels that produce a total of 355,000 kilowatt hours of electricity annually. They provide about 30 percent of the facility’s electricity needs; the rest is sourced from wind energy.

Arians also noted the facility has features to enhance public education. Those include an outdoor amphitheater, viewing walkway and observation tower within the processing building.

The Boulder County Recycling Center employs 40 people during one day shift, and another five people who do baling, cleanup and maintenance in the evenings. The goal is to increase tons and expand to a second shift within the next year.