What glass equipment did for one municipal program 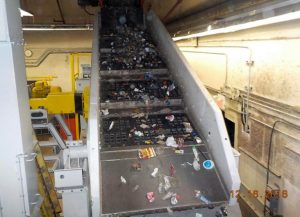 A materials recovery facility spent $671,000 to buy and install glass cleanup equipment, which is generating $296,000 in annual savings. The project in Guelph, Ontario shows how investing in glass recovery technologies can pencil out favorably for MRFs.

Many MRFs struggle to manage glass collected in curbside carts. Often mixed up, broken and highly contaminated, the material costs U.S. sorting facilities about $150 million a year to manage, according to research funded by the Closed Loop Foundation.

In Ontario, the Continuous Improvement Fund (CIF) – a partnership of packaging producers and municipalities – has helped fund glass cleanup equipment projects at MRFs.

“Ontario municipalities continue to demonstrate success in the recovery of mixed broken glass by installing additional glass cleaning equipment in MRFs,” according to the CIF. “The latest municipality to tackle this issue was the City of Guelph, which was facing a challenge trying to meet glass market specifications.”

With a population of 122,000, Guelph was experiencing excessive non-glass contamination in its glass stream, resulting in residue rates averaging 22 percent but reaching as high as 30 percent. That led the local glass beneficiation facility, Nexcycle, to reject loads, meaning the municipality was forced to dispose of the material at landfill at a cost of just over 57 Canadian dollars ($43) per metric ton. Nexcycle, which tolerates an incoming non-glass contamination rate of no higher than 10 percent, cleans and processes glass to sell into the beverage container, fiberglass, beads and abrasives markets.

The loads were being rejected, despite the fact that the MRF had earlier installed a Titech (now Tomra Sorting Recycling) optical sorter to clean the mixed-glass stream.

The City of Guelph contracted with Van Dyk Recycling Solutions for the glass cleanup equipment.

The upgrade included conveyors; a spalek screen, which removes items larger than 120 millimeters in size; and a zigzag sifter with vacuum, which removes smaller fractions and fines. The Titech optical sorter was repurposed to sort tubs and lids.

Post-project audits found the changes brought the levels of non-glass contamination down to an average of a little over 4 percent. In addition, the spalek screen began capturing flattened aluminum cans that had been getting into the glass stream.

The upgrades resulted in the additional diversion of about 2,620 metric tons of glass and 100 metric tons of aluminum per year, according to a project summary document. In addition, by moving the Titech sorter, the facility was able to reduce the number of manual sorters on staff by two.

Financially, the project is generating a savings of about CA$394,000 ($296,000) per year, a number that totals landfill cost savings, new revenue from aluminum sales and reduced labor costs. The project payback is estimated at less than three years.

“This system could be a solution for any municipality that wants to reduce cost due to high contamination levels in their glass stream and associated market rejections,” a CIF project profile document concluded.

CIF also funded a project in the Regional Municipality of Niagara, Ontario. That project funded equipment to clean glass at the MRF so it could be used by the municipality’s own EcoGlass program to produce a sandblasting media.