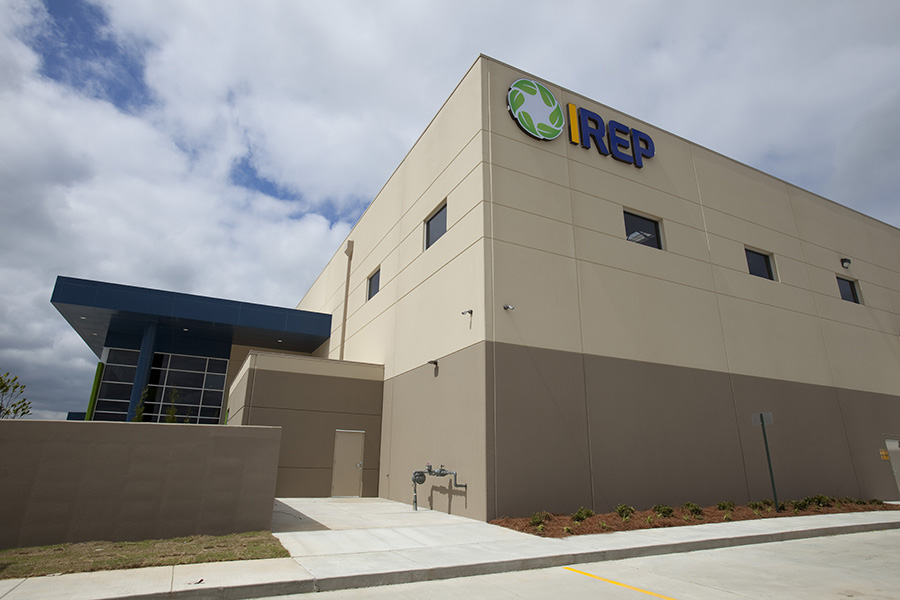 Which raises the question: Could the facility reopen anytime soon?

“I don’t think you can, economically, right now, and I think that’s the reality of the situation,” said Kyle Mowitz, manager of IREP-Montgomery, LLC. “But, on the hopeful side, I hope someone figures it out, because it’s a shame to have it just sit.”

The $35 million Infinitus Renewable Energy Park (IREP) opened in 2014 and began sorting recyclables from municipal solid waste. But it closed in fall 2015.

In August of this year, the company submitted a voluntary petition for Chapter 11 bankruptcy. Schedules detailing creditors and the company’s financial condition were submitted Sept. 21.

The financial documents offer additional insight into the challenges facing the project, as well as the creditors who stand to lose money.

The filings show unsecured claims totaling $4.6 million from 53 creditors both inside and outside the recycling industry. In addition, they show $5.8 million owed to secured holders of revenue bonds used to help build the facility (secured creditors have collateral taken as a security against non-payment). The value of the collateral supporting those secured holders is listed as zero.

Those private bonds, issued by IREP-Montgomery, were purchased by individuals Mowitz described as knowledgeable investors.

“Those are going to be the big losers in the deal, which is very sad,” he said.

The single biggest creditor is the City of Montgomery, which has a $31.1 million claim on the property. IREP-Montgomery and the City have agreed to deed the facility to the city, although the transfer is subject to court approval.

Barry Crabb, finance director for the City of Montgomery, noted some creditors who aren’t expecting to otherwise be repaid could push the idea in court of liquidating the property instead.

Because of the way the feedstock supply agreement was structured, the City is currently paying $2.175 million per year toward the $31.1 million in 2013 bonds, which are the reason for the city’s claim, Crabb told Resource Recycling. The bonds were issued by the Alabama Capital Region Solid Waste Disposal Authority, an entity created by the city.

Crabb noted that the City raised the garbage collection fees on its 70,000 households to generate more than $2 million in additional revenue each year.

On the commodities revenue side, reports to bondholders show the company brought in more than $1.9 million from the sale of OCC, mixed/soiled fiber, PET, HDPE, mixed 3-7 plastics, aluminum cans and ferrous metals in 2014.

Bankruptcy documents estimate the facility’s current equipment value at $11.3 million and the real estate and building value at $8.8 million. Rolling stock, including loaders, trucks, trailers and forklifts, have already been surrendered to creditors.

According to Crabb, the facility is shuttered and leftover compost has been removed from the site. All of the city’s trash and recyclable materials are currently headed to a city-owned landfill.

“Where we are right now is we’re back at zero,” Crabb said.

City officials have talked with a dozen or more potential operators of the facility, and Crabb said “there are some interested prospects.” He noted that two entities are interested in running it as a single-stream materials recovery facility (MRF) that, in addition to city household material, would sort commercial recycling. Two others are considering operating it as a mixed-waste MRF but adding an alternative fuel component, he said.

The primary challenge to such efforts would be getting enough volume, Crabb added said. City leadership remains committed to spending no additional public money on its operation, he said.

Mowitz said that when the facility was running, the volume of material delivered by the City was at times 40 percent lower than initial expectations. But the feedstock supply agreement was written such that it wouldn’t allow IREP-Montgomery to declare a city default based on low volumes – a move that would require the city to pay to make the company whole – until after a year had passed, he said.

In response, IREP-Montgomery inked deals to acquire material from other locations, and it worked to obtain commercial material, Mowitz said. It still couldn’t get the volume needed to make the economics of running the facility work, he said.

Mowitz noted that one of those out-of-area jurisdictions, the Emerald Coast Utilities Authority, just opened its own single-stream MRF in Pensacola, Fla. Others have since committed to landfilling material, he said.

Given that, and given the current commodity prices, he expressed doubt the facility could operate profitably today without municipal subsidies or a technological breakthrough.