Declines seen in exports of most materials 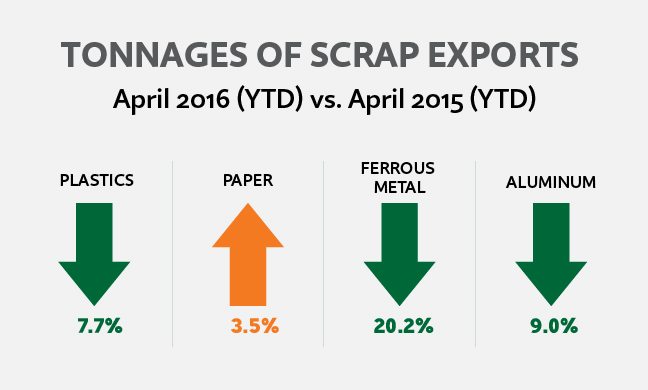 Export figures for recyclable materials continue to slump when compared with 2015 totals.

In April, the most recent month for which figures are available, scrap plastics exports totaled 401.67 million pounds, an increase of 11.8 percent from March 2016 export levels. That marked the third straight month of volume gains over 10 percent.

When matched against April 2015 levels, however, the volume of plastic scrap exports in the month was down by 10.7 percent.

Meanwhile, the weighted price of recovered plastic exports in April 2016 was 16.8 cents per pound, down 2.0 percent from its March standing. That price-per-pound figure was down 8.7 percent from the price level in April 2015.

As for other exported materials, recovered paper exports were up slightly through the first four months of 2016. Through April, 6.63 million metric tons were exported, a 3.5 percent increase from April 2015 YTD levels. At $150 per metric ton, however, the weighted average price of exported recovered paper through April was down YTD by 5.2 percent.

The 4.42 million metric tons of ferrous scrap exported through April 2016 amounted to a 20.2 percent YTD decrease. This was the fourth month in a row of YTD declines over 20 percent in the ferrous category. At $332 per metric ton, the weighted average price of exported ferrous scrap was down 21.1 percent from April 2015 YTD levels.