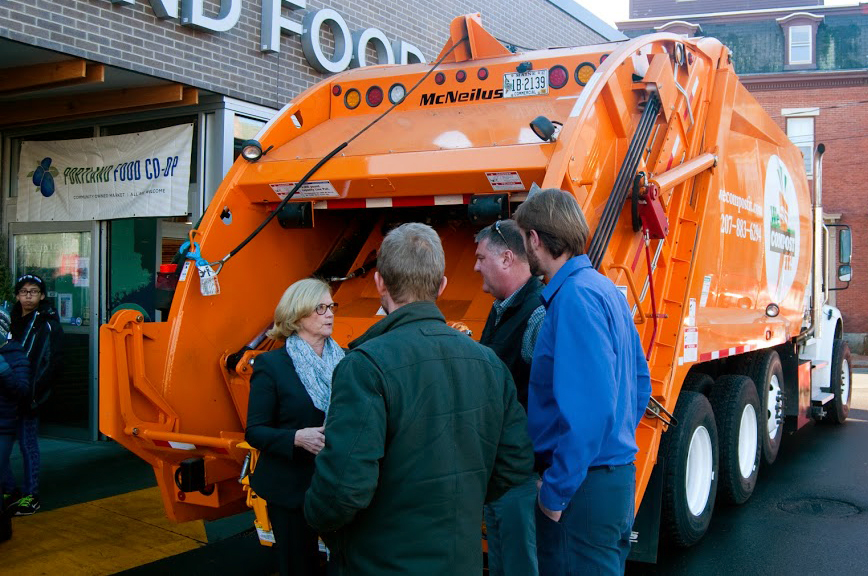 U.S. Rep. Chellie Pingree, D-Maine, talks with staff at We Compost It, which creates compost from residential and institutional food scraps.

A bill in the U.S. House of Representatives aims to create a federal grant program providing up to $100 million a year to build large-scale composting and anaerobic digestion facilities.

The Food Recovery Act of 2015, House of Representatives 4184, would take multiple steps to reduce food waste at the farm, retailer and consumer levels while helping to provide more food to the needy.

The bill was introduced in the House on Dec. 7 by Rep. Chellie Pingree (D-Maine), and it has been referred to several committees.

“The first thing Rep. Pingree wants to accomplish by introducing this bill is to bring the conversation about food waste to Congress, and build support for these ideas with her colleagues,” Willy Ritch, a senior advisor and communications director for Pingree, told Resource Recycling. “Reducing food waste shouldn’t be a partisan issue. Food issues, in general, don’t tend to be as polarizing as other issues in Congress, so Representative Pingree is hopeful that she can get bipartisan support for the bill and it can move through Congress.”

The bill would establish an EPA-managed grant program to provide states with funding to build major composting facilities.

To qualify, a state would have to “limit the amount of food waste that may be disposed of in landfills,” although it doesn’t say specifically how the state must limit it. Qualifying states would also have to work with food banks to ensure wholesome food makes its way to the needy instead of the composting facility or anaerobic digester. Lastly, states would need a plan to ensure residue from a composting facility or anaerobic digester is disposed of in a way that doesn’t create an environmental hazard.

The legislation would authorize up to $100 million a year for the program, although Congress would still need to appropriate funds before any money came available.

It would also label composting a conservation practice, making composting projects eligible for financing and technical assistance from the Natural Resources Conservation Service, part of the U.S. Department of Agriculture (USDA). 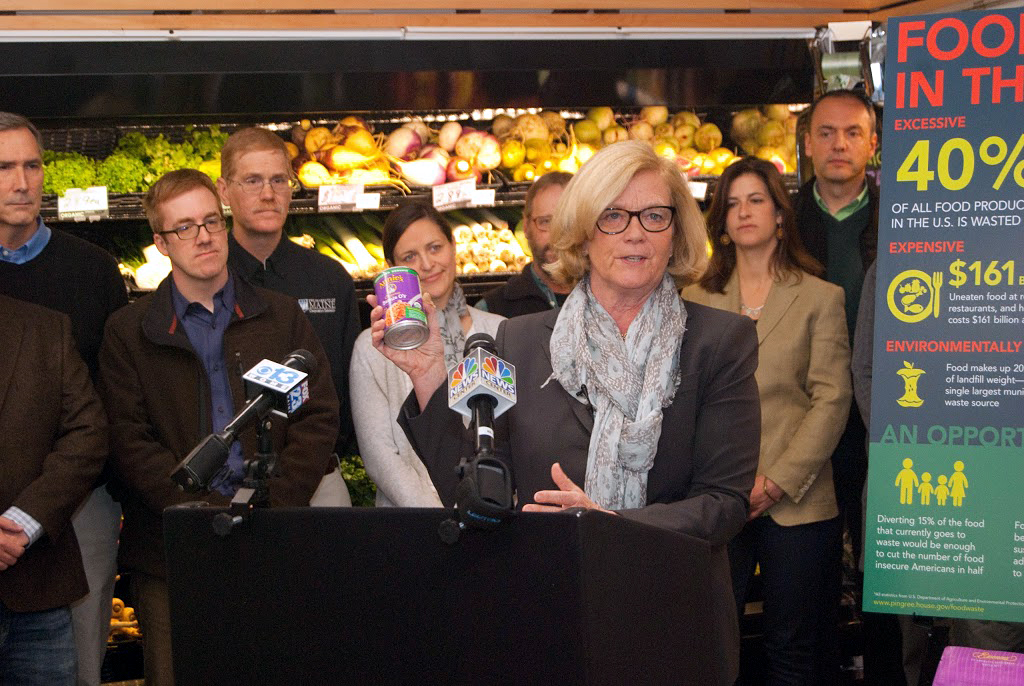 Pingree discusses her Food Recovery Act bill at a press event at the Portland Food Co-op in Portland, Maine.

In a provision that would affect just about every American, the bill would also regulate the expiration-date language food manufacturers put on products. Products would have to use the text “Best If Used By” and “Manufacturer’s Suggestion Only” instead of any alternatives, although high-risk foods could use the text “Expires On.” None of the provisions would apply to infant formula.

The bill would also require companies that have $10,000-plus food-service contacts with the federal government to donate excess food to hunger-relief organizations, staff at Pingree’s office told Resource Recycling.

Advocates of reducing food waste are cheering the bill’s introduction. Staff at the Natural Resources Defense Council hailed its introduction, and author Jonathan Bloom wrote for foodtank.com that its introduction “was a day I’ve waited 10 years to see.” He expressed skepticism it would make it to the House floor for a vote, but he noted it could prompt a robust debate on the federal role in fighting food waste.

In the statement, Pingree’s office said that even if the bill doesn’t pass, Pingree will look to include provisions from the bill in other approved legislation.