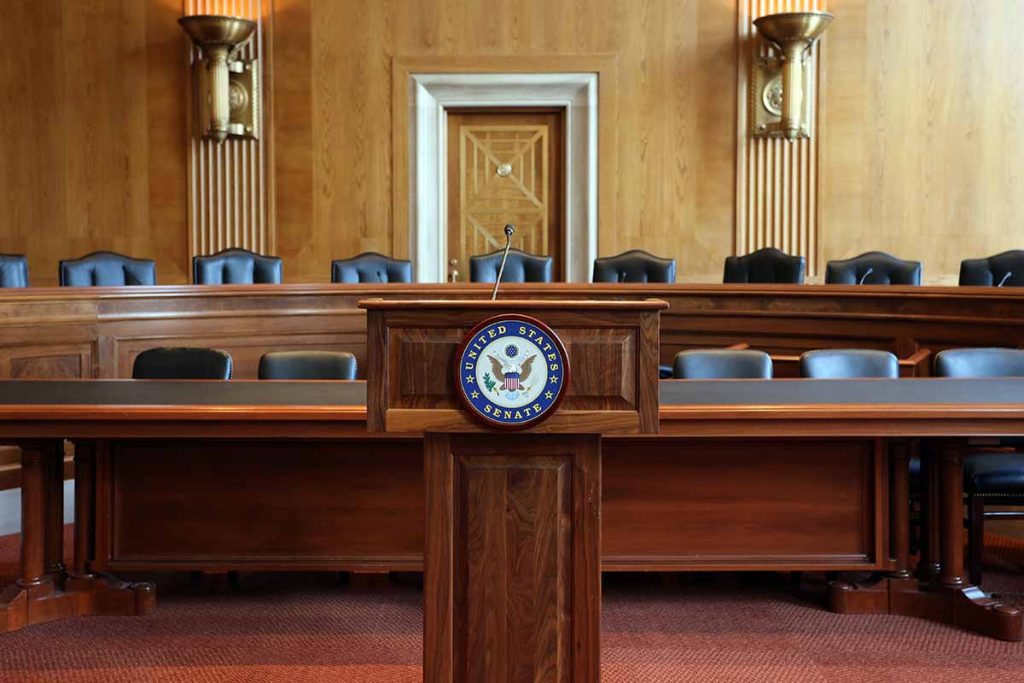 The Dec. 15 hearing by the U.S. Senate Committee on Environment and Public Works brought four panelists together to answer questions from legislators. | Katherine Welles/Shutterstock

The Dec. 15 hearing by the U.S. Senate Committee on Environment and Public Works’ Subcommittee on Chemical Safety, Waste Management, Environmental Justice and Regulatory Oversight brought four panelists together to answer questions from legislators.

The panelists were John Peterson Myers, founder and CEO of Environmental Health Sciences; Judith Enck, president of Beyond Plastics; Matt Seaholm, CEO of the Plastics Industry Association; and Eric Hartz, co-founder and president of Nexus Circular, a chemical recycling company.

Oregon Sen. Jeff Merkley opened the hearing by bringing up the importance of understanding the chemicals in plastics better. He also highlighted the need to increase plastics recycling rates and decrease the volume of plastics leaking into the environment.

“It’s not going away, in fact, it’s going to get worse,” he said. “Plastic doesn’t go away, it just breaks down.”

Enck said plastics reduction is what’s most needed. While there are useful applications for plastic, such as medical advancements and making cars more fuel efficient, she said, “we don’t see medical waste hanging from the trees.”

“I don’t see car bumpers in my local park. I see a lot of single-use plastics,” Enck said.

Merkley, a Democrat who regularly sponsors and champions environmental bills, pressed Seaholm on whether the industry would support extended producer responsibility (EPR) bills, a national container deposit bill, increased public reporting of the chemicals contained in plastics and more extensive research into the effects of those chemicals on human health.

Seaholm said he felt the industry would support a national bottle bill if it were “crafted correctly.”

“I think it would certainly be open to that on a national scale, again, crafted correctly,” he said.

On extended producer responsibility, Seaholm said he was open to well-crafted bills with “reasonable and attainable recycled content targets.”

In her 22-page written testimony, Enck called for a 50% reduction of plastic production over the next decade, noting that “we need policy solutions that are commensurate with the problem.”

“Some states and local governments have adopted new laws, but the federal government is largely missing in action,” she wrote. “This will only change with Congressional leadership – the leadership of this committee and your colleagues in the House.”

Several sessions at the 2023 Plastics Recycling Conference (March 6-8 outside Washington, D.C.) will cover the evolving relationship between policy and plastics sustainability. Check out the full session lineup and sign up today to hear exclusive insight from legislative insiders, government affairs experts and others.

“Nor should it be, because it would absolutely cripple supply chains and economic progress in the U.S.,” he added. Seaholm’s opening remarks can be read here.

In response to another line of questioning from Merkley regarding transparency around additives and chemicals, Seaholm said he has “full faith in the FDA’s approval and decision-making process” and that the industry takes safety seriously.

“When it comes to food contact in particular, we never cut corners,” he said, and noted that he thinks the FDA’s current process is sufficient.

More studies on chemicals and microplastics are always welcome, Seaholm said, because there is not sufficient data yet to have a full understanding of the problem.

Legislators also questioned the panel about chemical recycling, with Mississippi Sen. Roger Wicker, a Republican, noting he feels that “advanced recycling is another potential solution for plastic waste.”

“It’s not an either-or solution, it’s a both-and,” he said, adding that reduction also needs to happen “where merited.”

In response to concerns about chemical recycling, Seaholm said it’s important to “avoid stifling innovation in promising new technologies” that are needed to address plastic pollution and create a circular economy.

Enck and Myers both warned about the unknowns surrounding chemicals in plastics in their testimony, with Myers giving several examples of what endocrine disruption can mean for a body.

“Most chemicals in plastics have not been tested for safety and none have been tested thoroughly,” Myers said, adding that “if you don’t test then you don’t know.”

A version of this story appeared in Resource Recycling on December 16.