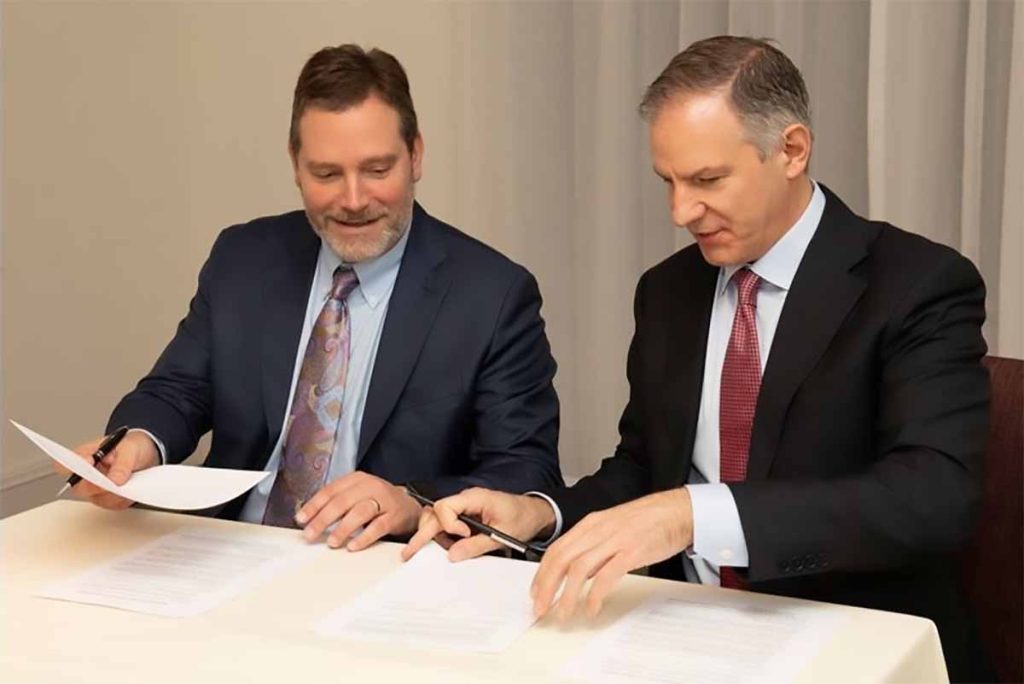 Michael Zamora, senior vice president of Product Solutions at ExxonMobil, and Ron Delia, CEO at Amcor, signed the agreement, through which ExxonMobil will sell increasing amounts of recycled resin each year to Amcor. | Courtesy of Amcor

Zurich-based Amcor agreed to a five-year deal to purchase recycled PE, which will be used in food and healthcare product packaging. The amount of recycled resin supplied under the agreement will increase each year, eventually reaching about 220 million pounds a year by the end of the five-year period, according to a press release.

The plastic will consist of ExxonMobil’s recycled polyolefins produced through its Exxtend technology, which the petrochemicals giant employs at a facility in Baytown, Texas. ExxonMobil is working to scale up production in Baytown to a capacity of 66 million pounds per year.

The announcement came shortly after Amcor said it was tripling its goal for use of recycled plastic across its packaging portfolio, from 10% by 2030 to 30% by 2030. Amcor says the deal will help it achieve that target.

Amcor is a signatory to the Ellen MacArthur Foundation New Plastics Economy Global Commitment. Through its participation, Amcor reported producing nearly 2.4 million metric tons of plastic packaging last year, or about 5.2 billion pounds, last year (July 2021 through June 2022 time frame). Of that total, about 292 million pounds was post-consumer resin (PCR), for an average of 5.6% recycled content.

The ExxonMobil deal applies only to polyethylene, however, and nearly half of Amcor’s packaging last year was PET. The company also reported to the Ellen MacArthur Foundation progress in using more RPET.

About 2.3% of Amcor’s packaging is rigid HDPE, and at least 6.9% is flexible polyethylene packaging (some flexible categories didn’t specify the polymers used but likely use some amount of PE, as well), according to Amcor’s report to the Ellen MacArthur Foundation.

Amcor said it would use ExxonMobil’s PCR across its global packaging portfolio, with a focus on food and healthcare product packaging.

Amcor earlier in April 2022 first announced it would start buying PCR produced through the Exxtend chemical recycling process, but at the time the company did not disclose how much it would buy and over how long of a term.

ExxonMobil can’t yet produce the amount of PCR that Amcor committed to buying. The company previously said its smaller-scale Exxtend facility in Baytown had recycled about 11 million pounds through June 2022.

But the company is working to build a larger recycling unit, and it has plans to build additional recycling facilities in Beaumont, Texas; Baton Rouge, La.; and Sarnia, Ontario, as well as in France, the Netherlands and Singapore.

When those projects are completed by the end of 2026, they’ll give the company an Exxtend PCR production capacity of over 1.1 billion pounds, a company leader said previously.

Feeding enough suitable scrap plastic to those facilities will be a prime challenge, as it is for many plastics recycling plants looking to dramatically scale up capacity to produce food-grade PCR.

ExxonMobil is a founding member of Cyclyx International, a joint venture with pyrolysis company Agilyx. Cyclyx is working to build scrap sorting and feedstock preparation plants that would supply bales meeting specifications for chemical and mechanical recycling processes.

ExxonMobil and plastics production LyondellBasell have announced they’ll invest up to $100 million in the first secondary sorting plant, to be located in the Houston area. That plant is slated to produce nearly 331 million pounds of feedstock per year.

The secondary sorting/feedstock preparation plant strategy recently received an endorsement of sorts in a report from consulting firm McKinsey.