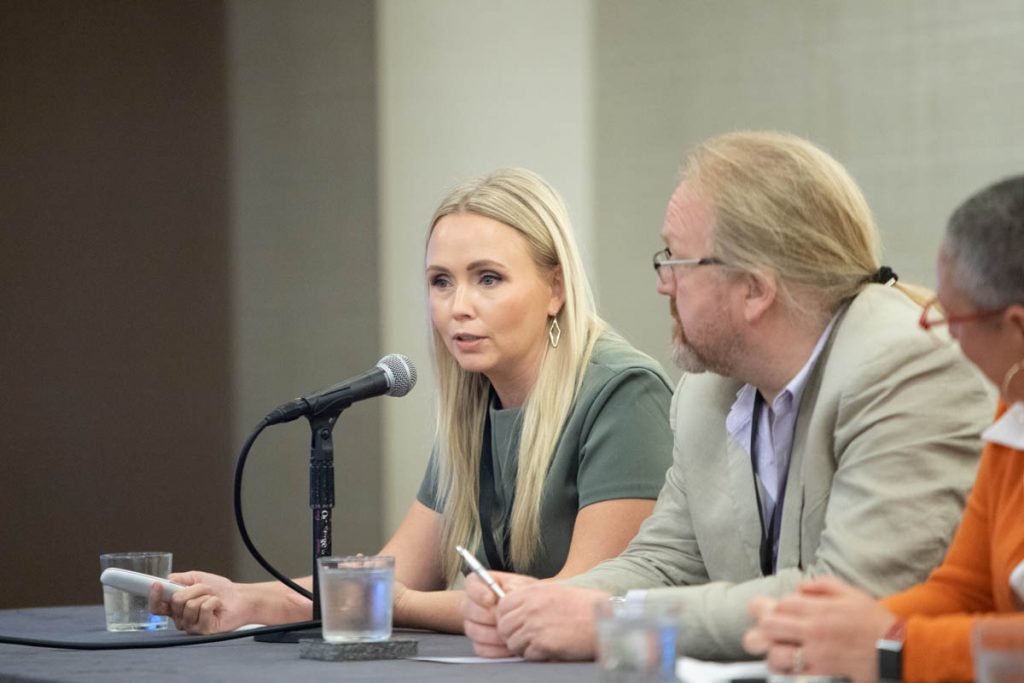 Megan Tabb and Lee Clayton of Synergy/RePolyTex were among the presenters of the e-plastics focused session at the 2022 E-Scrap Conference. | Big Wave Productions/Resource Recycling, Inc.

Two businesses with unique approaches to meeting the goal of domestically processing plastics recovered from electronics shared their plans at the 2022 E-Scrap Conference.

BoMet Polymer Solutions and Synergy, parent company of RePolyTex, presented their respective business plans during the Sept. 21 “Strategies for E-plastics” session at the 2022 E-Scrap Conference, held Sept. 19-21 in New Orleans.

Megan Tabb, director of compliance at Synergy, said China’s National Sword policy and the recent Basel Amendment is what pushed Synergy to develop its own outlet for plastics.

Synergy was founded in 2000 and pulls in a lot of low- to mid-grade electronics for shredding, she said, which means it has a lot of e-plastic to handle.

“Basel made it increasingly more difficult to move electronic plastics from the U.S. to other countries,” Tabb said, adding “that means today those of us who are electronic recyclers who are generating a plastic product are struggling to find outlets for it.”

Synergy was seeing that 50-60% of their shredded material by weight was plastic, so “adding value to our plastic stream has been a huge deal to our company.”

That led to the founding of RePolyTex, which came on-line in 2020 and takes Synergy’s plastics and reprocesses it into mixed-polymer plywood that is economically competitive for the grade of natural plywood it competes with, Tabb said. 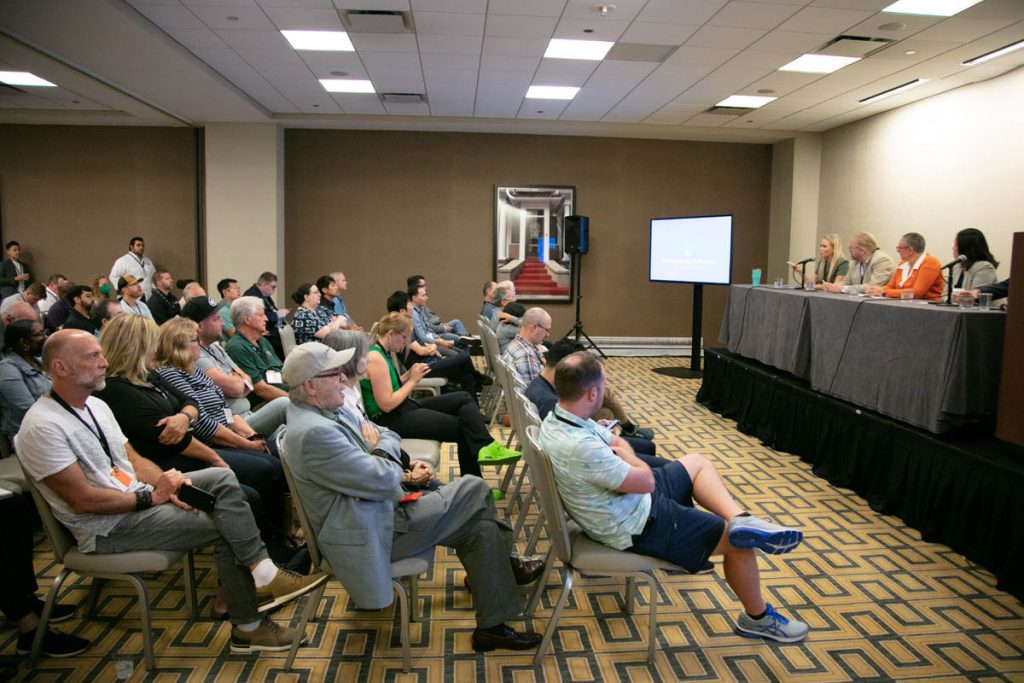 Lee Clayton, chief technology officer for Synergy and RePolyTex, said because it’s a mixed polymer sheet, it can handle a little bit of contamination that normally has to be removed, such as wood or paper. It’s also less processing intensive because the plastics are turned into a powder before being molded into an 8-foot-by-4-foot sheet for non-structural applications. It has foam in the middle to make it lightweight, and the company’s recovery rate is upward of 90%, he noted.

“We feel that we’ve closed the loop,” he said, adding that they make up to 100,000 sheets per year from not only e-plastic but “other hard polymers that would otherwise be hard to process or be exported, buried or burned.”

Bo Zhang, CEO of BoMet, said the company’s focus is post-consumer ABS. BoMet is a specifically e-plastic processing company that has two facilities, one in western New York near Buffalo and one in Ontario, Canada. At those locations, the company separates plastic by polymer using flotation separation, electrostatic separation and optical sorting.

Mei Zhao, BoMet managing director, said the company has an extensive floatation system of more than 10 tanks for precise separation.

Zhang noted that, for 2018, U.S. EPA estimated there to be 2.4 million metric tons of end-of-life post-consumer electronic devices. With a 35% recycling rate and using the estimate that 25% of that by weight is e-plastic, there were 231,000 metric tons of e-plastic available to be recycled in 2018. In 2021, that had risen to 325,000 metric tons.
“The question is, where is it going?” Zhang said. “We know there are several companies that do what we do. We can foresee there will be a tremendous supply of e-waste plastic,” and therefore more need to handle it. 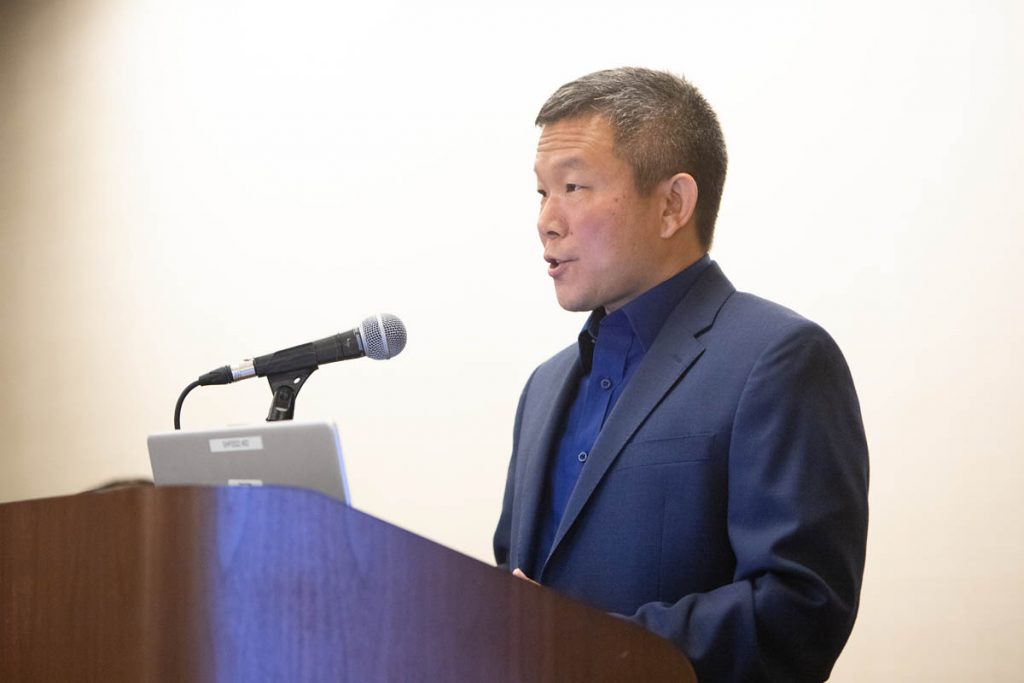 Challenges remain. RePolyTex’s Clayton said one problem with plastics recycling is “we tend to ship it all over the world before somebody does something with it,” when it’s most sustainable to keep it local. That’s why RePolyTex does its work on-site in North Carolina.

Additives and air pollution are additional issues, Clayton said in response to an audience question. He said RePolyTex had done air emissions tests on its products and is within regulatory boundaries, but his concern is the high levels of additives such as brominated flame retardants in new items.

“I was shocked, quite frankly, in terms of new products coming through,” he said. “We need to engage with the manufacturers.”

Zhang agreed that there’s a need to work more with manufacturers, to have a recycling-friendly design and to emphasize the need to increase post-consumer resin usage in products so there is more demand for what the company creates.

“The challenge still ahead is the inadequate recycling system of e-plastic in North America,” he said, adding that though there is a growing demand for ABS in the U.S., right now plastics from electronics are “nearly the single source for PCR ABS in North America.”

A version of this story appeared in E-Scrap News on October 5.