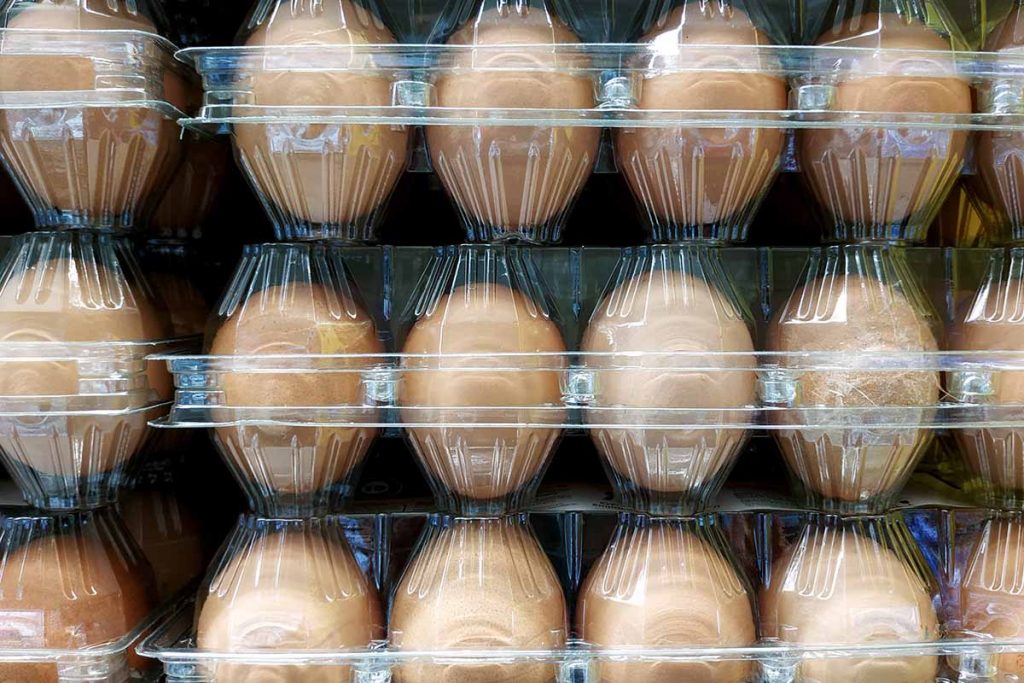 Current debate over a California bill requiring PET thermoforms to contain RPET derived from thermoforms boils down to one question: What will materials recovery facilities do?

In the case of PET thermoforms, the packaging already often contains PCR, but that resin usually comes from recycled bottles. AB 2784 requires PCR from thermoforms themselves.

Because thermoforms aren’t included in state bottle deposit programs, brand owners will largely rely on materials recovery facilities (MRFs) to sort them from the curbside PET mix for sale to plastics reclaimers. But in California, not a lot currently do, in part because the California Redemption Value (CRV) system creates a de facto incentive for MRFs to keep thermoforms in PET bottle bales.

“This bill simply won’t work,” Steve Alexander, president of the Association of Plastic Recyclers (APR), said in an interview. “Unless there’s incentive for the MRFs to separate out thermoforms, then it’s very difficult for anybody to get their hands on the supply of material to make recycled content for thermoforms.”

However, another stakeholder is confident the bill will drive demand that will reverberate up the supply chain. Mark Murray, executive director of advocacy group Californians Against Waste, pointed to California’s existing RPET-content mandates for beverage bottles.

“We know we can affect the marketplace with the use of PCR. We know that that increased demand can translate into higher prices for the collection infrastructure,” he said.

“This [thermoform] policy was developed in real thoughtful recognition of the PET recycling marketplace and building on the success of PET bottle recycling,” he added.

The bill requires thermoforms to average at least 10% PCR starting in 2025. Later requirements depend on overall recycling rates for thermoforms. The bill imposes a penalty of 20 cents for each pound of PCR the producer falls short of the target.

APR has long supported recycled-content mandates as a way to drive demand for recycled resins. But in this case, Alexander noted, a lack of supply is a major concern.

“Unfortunately, we’re in a position right now of trying to overturn this bill with a governor’s veto,” Alexander said.

He pointed out that under the CRV program, the California Department of Resources Recycling and Recovery (CalRecycle) establishes a formula estimating how many CRV-eligible containers are in each pound of a bale produced by MRFs, recognizing that a percentage of non-CRV material – thermoforms, mayonnaise jars and more – make it into bales.

The Plastic Recycling Corporation of California (PRCC), a beverage industry-funded broker that buys PET bales from California MRFs and others, published a 2020 study that found curbside PET bales averaged about 19% thermoforms. PRCC created a specification for themoform-only bales, but it pointed to the commingled payout as a big impediment to more MRFs producing more of those bales.

“Until you fix the commingled rate, as hard as you try, nothing else is going to really, ultimately provide the supply available to meet the intent of this legislation,” Alexander said. “The only way to do this is to get rid of the commingled.”

He noted that, regardless of the CRV program issues, many MRFs won’t sort, store and bale thermoforms because they’re a relatively low-volume commodity that doesn’t justify the sorting costs and bunker space.

Recognition that some will fall short

Murray of Californians Against Waste acknowledged many producers won’t be able to meet the requirements, just as many beverage companies are still using 0% PCR in bottles.

For instance, those producers using resins other than PET for thermoforms will run up against the fact there is a lack of FDA letters of no-objection for resin Nos. 2-7.

“We know that there are other thermoforms that can’t use PCR, but our objective here is to create an even playing field so that all plastic thermoforms have to meet a similar threshold, whether it was a financial threshold or a consumption-of-thermoforms threshold,” Murray said.

He doesn’t believe the penalty of 20 cents per pound will break any companies. “It’s certainly a cost and it’s certainly an enticement to comply with the requirement, but it’s not going to drive anyone out of business,” he said.

Murray acknowledged the commingled CRV rate issue and said “it is a true fact that those curbside recycling programs have an incentive to stuff as much PET … in that bale as they possibly can.” The issue needs to be resolved, he said.

He noted that CalRecycle is now providing Quality Incentive Payments (QIPs) to recycling programs that produce PET bales with less than 2% PET thermoforms and other contaminants, an extremely high bar given the assortment of stuff that lands in curbside carts. But the amount, $180 a ton, is proving low to encourage widespread thermoform sorting.

Murray also said some facilities successfully keeping thermoforms out of PET bottle bales can work with CalRecycle staff to develop a higher CRV payment rate specific to their PET bales. By going that approach, they get paid more for bottle bales and they’re still able to sell thermoform bales for scrap value.

Finer points of the bill

The thermoform legislation is constructed with room for variation on the exact PCR percentages required.

The bill exempts certain categories of thermoforms, including those holding medicines or baby formula, as well as reusable and compostable packaging.

The legislation imposes an annual 20-cent penalty for every pound of PCR a producer falls short of their requirements. For example, if a brand owner sold 2 million pounds of PET thermoforms in 2025, the company would need to use 200,000 pounds of PCR. If it used 150,000 pounds of PCR, it would owe $10,000.

The bill allows CalRecycle to reduce the penalties, taking into account anomalous market conditions; lack of supply due to unforeseen events, such as a natural disaster; and other factors that have prevented the producer from meeting the requirements. If the thermoform recycling rate in California is 60% or higher, CalRecycle must also consider whether other industries, such as polyester textiles, are hogging the PET thermoform bales.

Producers failing to meet the minimum recycled content requirements would be required to submit corrective action plans to CalRecycle.

Penalty money would be deposited in a Thermoform Recycling Enhancement Penalty Account, which would be designated for spending that supports thermoform recycling in the state, according to the bill.

As is the case with PCR used in beverage bottles, producers would have to report their pounds of virgin and recycled resin used annually, and CalRecycle would post that data on its website.

It’s unclear how many brand owners currently use PCR from thermoforms in their packaging.

Watsonville, Calif.-based berry brand Driscoll’s explained to Plastics Recycling Update earlier this year how it has worked for years to encourage its suppliers to source RPET for Driscoll’s clamshells from recycled thermoforms. As of last year, Driscoll’s averaged 9% recycled-thermoform content in its clamshell containers.