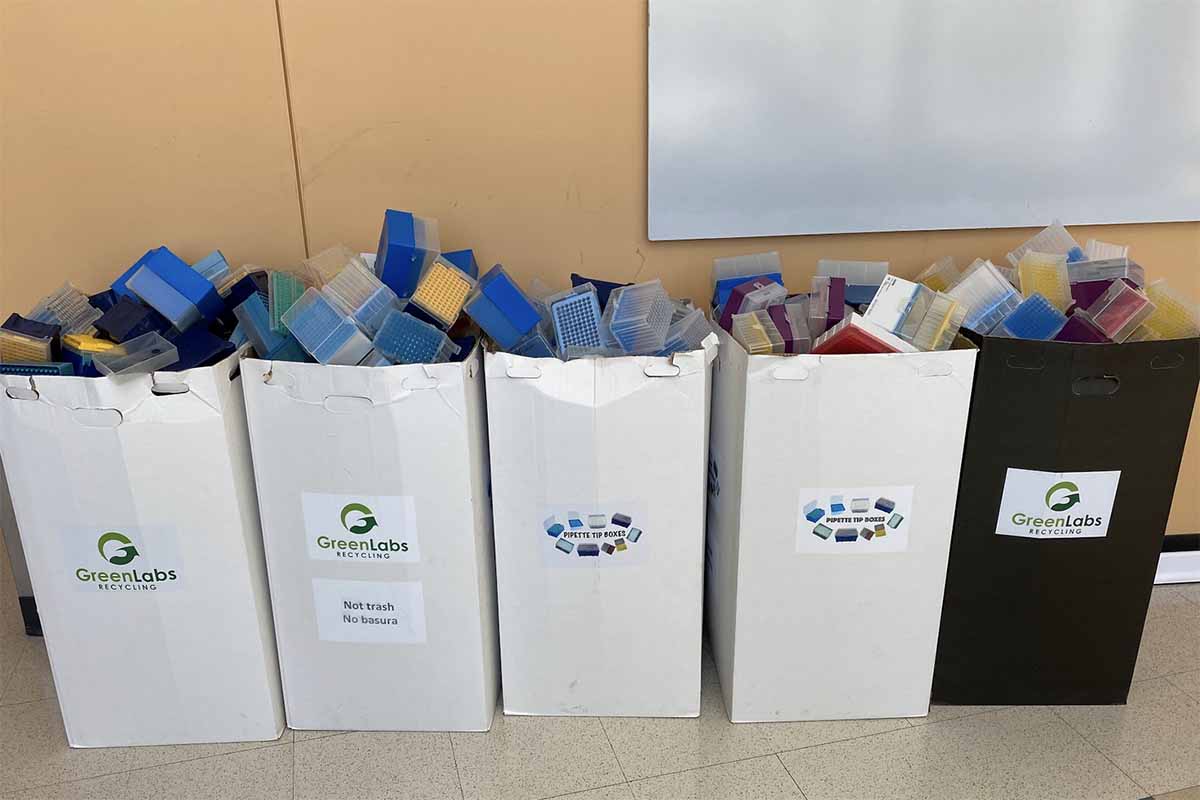 More than 20 million plastic pipette tip boxes are shipped to the greater Boston area each year, and the vast majority are not recycled. GreenLabs Recycling is working to change that.

The Concord, Mass.-based company is focused on diverting lab plastics from the landfill, and it recently hit 100,000 pounds of plastic recycled since it began collecting material in 2019. Most of that comes from pipette tip boxes, which are typically made of PP and are honeycombed boxes that hold the disposable tip attachments scientists use to transfer liquids.

Company co-founder Brenda Waterman said the team was excited to hit 100,000 pounds, because “when we first thought about this as two graduate students, we never imagined this was possible.”

“We think it’s a great accomplishment and we’re really looking forward to the future,” she told Plastics Recycling Update.

The idea for GreenLabs Recycling was sparked when Waterman and her now-husband, David Waterman, were graduate students at Brandeis University in Waltham, Mass. They were in the same Ph.D biology program and working in the same lab, and Waterman said “as all good ideas likely do, it emerged over a beer.”

The pair were discussing the “crazy amount of plastic we go through every day” in the lab, Waterman said, and realized their lab was a microcosm.

“We’re just one little lab in this small university. Imagine if you expand that amount of plastic to the entire university, how much plastic are we getting rid of at this university, and then the universities in the greater Boston area?” she said. “There are a few major universities in this area, major research hubs with so much biotech. It’s just kind of mind-boggling.”

The realization wasn’t novel – Waterman said it’s “definitely something that’s known within the scientific community” – but the pair decided to take action. “As scientists, we’re well aware of the problem, but also we’re focused on the experiments and just trying to get the experiments done,” she said.

After she and David Waterman started talking about it, every time she opened a new pipette box, it was “breaking my soul a little bit.”

A focus on labs

Brandeis offers funding and mentorship for lab innovations through its Sprout and National Science Foundation’s Innovation Corps programs, which Waterman went to and proposed the idea of a recycling program focused on lab waste. It was well-received, she said, and enabled the original idea to mature into a business.

“They’re interacting with this plastic every day,” Monteiro said of local labs. “They realize how much is building up and they’re actively wanting, hoping, looking for a solution. And here we are.”

The team’s monthly collection of pipette boxes for 2021 exceeded the previous year’s monthly totals in nine of the 12 months, Monteiro said, and she estimates that half of the company’s 100,000 pounds has been collected in the last year.

“We’re constantly growing,” she said. “Last month, March, was our biggest month ever, which is a great sign.”

Not only are more companies signing up, but the current companies are diverting more of their plastics to GreenLabs Recycling as they get used to the program, Monteiro said.

A small part of the solution

Labs are a perfect focus because they use large amounts of plastic items, often sterile, but are often misidentified as medical waste and burned or landfilled. Pipette tip boxes are very rarely contaminated by hazardous chemicals or biologicals and account for about 75% of total lab plastic by volume, Waterman said.

“We focus our efforts on pipette tip boxes, which is one of the main waste streams in a lab, but we are always looking to expand to other materials and can collect other materials,” she said.

GreenLabs Recycling services between 30 and 40 locations, Monteiro said, some of them a single lab and some locations that have several labs at them.

“Service can be for a single lab, a small lab generating a couple hundred tip boxes a month and also larger academic institutions that have multiple labs under their umbrella and who are generating hundreds of tip boxes an hour,” she said.

The company offers a direct-to-facility service, which sets it apart from other lab recycling programs that tend to be mail-in.

After the GreenLabs Recycling team collects the plastic, they do some processing at their facility but mostly rely on New England processors to remove labels, chip, clean the plastic and mold it into new products, Monteiro said.

Overall, the labs have been excited to see the service begin, Monteiro said. Waterman said there’s high buy-in and compliance from the labs, which leads to very low contamination.

“The scientists have been amazing at the compliance and not polluting the waste stream,” Waterman said.

GreenLabs Recycling is looking to expand in several ways, Waterman said. The team wants to divert more of the lab plastic in the Boston area, because they’ve “only tapped very little of the market.”

“We’re hoping to increase the amount of customers we can take on,” Waterman said.

But Waterman is also looking to expand beyond labs, and the company recently partnered with MassBrewBros and EcoFriendlyBeer, organizations providing news and information on craft breweries, to collect and recycle the round plastic beer can toppers.

“Looking even a little bit further into the future is being able to close the loop and manufacture from the plastic we are collecting,” she said. “We’d love to make something that would [not only] be very useful to the greater community, but the science community too.”