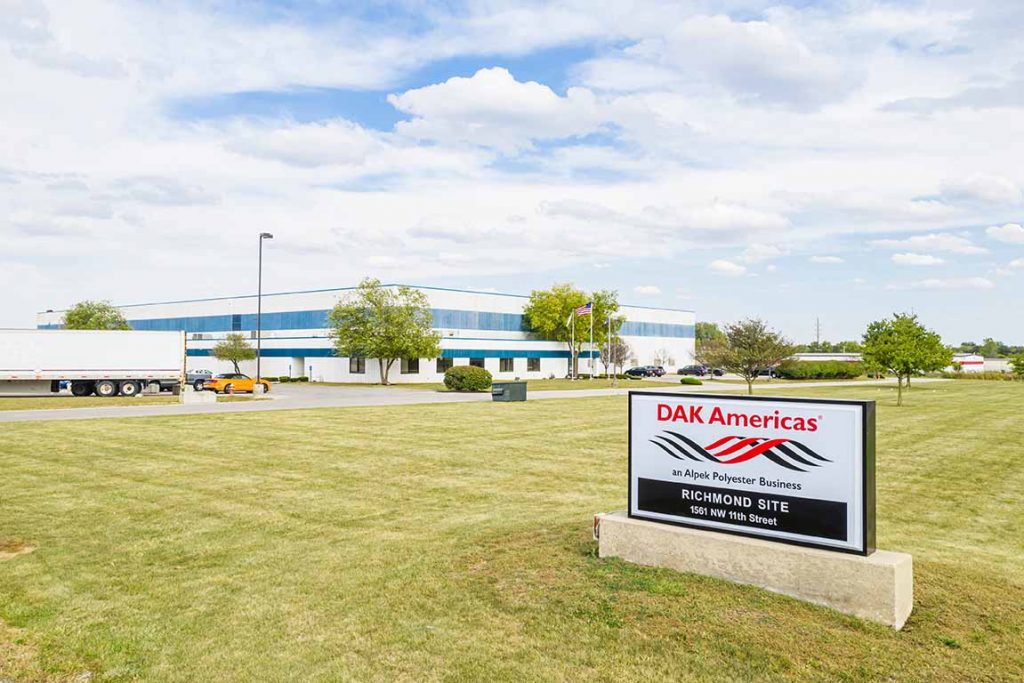 DAK Americas will spend $32 million on a project allowing it to produce food-grade 100% RPET pellets in North America for the first time.

The company, which is the largest PET producer in the Western Hemisphere, has already begun work at its Richmond, Ind. PET recycling facility. DAK Americas acquired the 100,000-square-foot facility, formerly known as Perpetual Recycling Solutions, in February 2019.

Earlier this month, DAK Americas received a zoning variance approval that will allow the project to proceed.

“The previous ownership of that facility ran it very well, but we’re a leader in the industry and we plan on operating a facility that is world-class, and that’s what we’ve been working on since we acquired that facility,” said Ricky Lane, public affairs, trade relations and corporate communications director for DAK Americas.

The facility, which sits on 15 acres, has a capacity to produce 100 million pounds of washed RPET flakes per year, including clear, green and mixed-color streams.

DAK Americas currently blends clear RPET flakes from the Richmond facility with virgin PET to produce recycled-content pellets. The company refers to the technology as its Single Pellet Technology.

The Richmond upgrade project will allow the facility to produce 100% RPET pellets with an intrinsic viscosity boost, Lane said. Converters will then blend the pellets with a 100% virgin pellet to reach a given percent recycled content in a mechanical blend, he said.

The project includes installing two Starlinger recoStar lines, each capable of producing 30 million pounds of RPET pellets per year, said Antonio Garza, vice president of PET recycling for Alpek Polyester, which owns DAK Americas. The lines will process most of the clear flake from the adjacent plant, producing pellets that will likely all be used in bottle making, Garza said.

Slabs of concrete have already been poured adjacent to the existing plant. On April 9, the Richmond Board of Zoning Appeals approved a zoning variance allowing construction of the new building to proceed.

Pneumatic tubes will convey flakes from near the bagging stations in the existing building to two new storage silos, Garza said. From there, they will be conveyed into the new building for processing on the Starlinger lines, which will include extruding, melt filtration, pelletizing, crystallization and solid-state polycondensation equipment.

Because pelletizing and solid-stating equipment are big users of energy, electrical improvements are needed on the site, Garza added.

DAK Americas will also install two silos for storing pellets. The material-handling improvements will give the facility the ability to ship products in bulk, rather than solely in bags, he said.

Delivery of the equipment could be delayed by the coronavirus pandemic. Even before the pandemic, equipment companies were experiencing significant demand for recycling equipment, increasing lead times, Garza noted.

Lane said the $32 million investment will occur over five years; however, the majority will be spent over the next 18 months, Garza noted.

Public agencies provided financial incentives for the project. The Economic Development Corporation of Wayne County, Ind. agreed to provide a $140,000 grant to DAK Americas to help with the project costs. Additionally, the Indiana Economic Development Corporation offered DAK Americas up to $270,000 in tax credits based on the company’s job creation plans.

The plant will be DAK Americas’ second producing food-grade 100% RPET pellets for use in bottles. Its first, with a capacity of 35 million pounds per year, is located in Argentina.

This story has been corrected to state that delivery of the Starlinger equipment may be delayed by the coronavirus pandemic but that is not certain. It has also been updated to make clear that converters will blend the 100% RPET pellets produced by DAK Americas with virgin plastics.