How an advanced line will recycle PET thermoforms 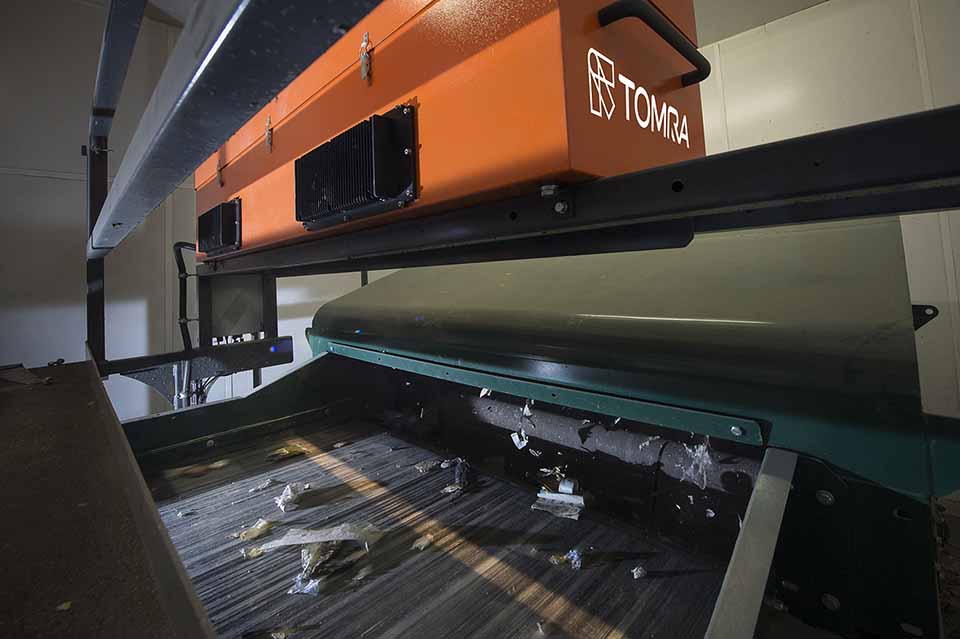 Tomra Sorting developed Sharp Eye because the percentage of thermoforms in PET bottle bales has been increasing. | Courtesy of Tomra.

PET thermoforms bring special baggage to the recycling process: Optical sorters often fail to differentiate them from bottles, and thermoform flakes are more prone to breaking into fines.

A plant coming to the Los Angeles area will use equipment that has been designed to overcome both challenges. Green Impact Plastics, a Mexican company building a $7 million facility in Vernon, Calif., plans to bring in bales of PET thermoforms and produce clean flakes for use in food packaging.

The company, which currently runs a thermoform recycling facility in Ciudad Juarez, will sell flakes to PET reclaimer rPlanet Earth. That company, also located in Vernon, will use the material to produce sheets for new thermoforms.

Recently, representatives of recycling equipment suppliers Zimmer America Recycling Solutions (ZARS), STF Group (ZARS is part of STF Group) and Tomra Sorting provided Plastics Recycling Update with details on the upcoming processing line. They described how the system, with an output capacity of 6,600 pounds per hour, will be optimized to overcome thermoform recycling roadblocks.

The effort is unique because post-consumer thermoforms aren’t generally targeted for recycling into new thermoforms.

“Our mission is to advance the circular economy, so this project is a very promising step in the right direction for us to be able to close the loop on an otherwise not recycled material,” said Nick Doyle, recycling area sales manager for the western U.S. at Tomra Sorting.

At the beginning of the processing system, bales will enter a bale opener, after which a magnet will remove any ferrous metals. The material then goes through a manual sorting area, where up to six workers will remove contaminants. The stream then goes to a Tomra optical sorter with enhanced recognition capabilities.

Carlos Manchado Atienza, regional director of the Americas for Tomra Sorting, said the unit will use the company’s Sharp Eye technology, which can distinguish between a PET bottle and PET thermoform. In this case, it wouldn’t make sense to install a camera connected to an artificial intelligence system to identify materials based on their visual characteristics, he said. That’s because a PET tray would look similar to a PVC tray.

In addition to differentiating PET from PVC, the Sharp Eye is able to distinguish PET trays from PET bottles based on their relatively small molecular differences. Separating the two is important. Manchado Atienza noted the intrinsic viscosity (IV) is lower for thermoform PET than it is for bottle PET, and too much commingling can alter the IV of the recycled plastic. Tomra Sorting developed Sharp Eye because the percentage of thermoforms in PET bottle bales has been increasing.

The sorter will fire on and remove PET, as opposed to targeting and removing contaminants. That positive-sorting approach ensures the PET has the highest purity, Manchado Atienza said. That strategy also ensures the black plastics the sorter can’t identify don’t follow the thermoform PET. 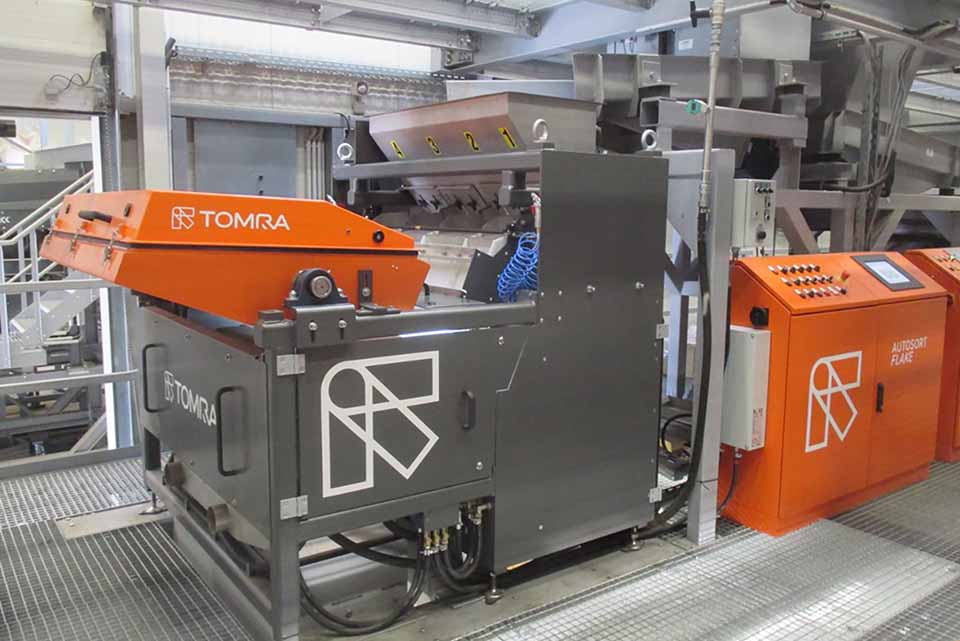 Tomra’s flake sorter can detect and sort material down to 2 millimeters by color and polymer. | Courtesy of Tomra.

Roland Zimmer, CEO of ZARS, said ZARS/STF Group is in charge of integrating the optical sorter components supplied by Tomra Sorting into a larger recycling system provided by ZARS/STF.

Zimmer noted that by using a wet grinder instead of a dry grinding process, the blades will last longer. It will also reduce generation of fines, improving yield. Additionally, the grinding setup does a fairly good pre-cleaning of the material, he said.

Then, flakes are gravity-fed into a float-sink tank, although Leiber noted its primary utility isn’t separation; there will be some material that floats off, but the tank will fundamentally provide a smooth cleaning of the thermoform flakes, he said.

In a normal setup, after the wet cutting mill, a line would have a friction cleaner to separate flakes from water and other solids. But friction cleaners, which use a drum and a rotor with blades turning at high speeds, are normally harsh on material, he said. Because thermoform flakes are more brittle than bottle flakes, you don’t want to put as much mechanical force on them, he explained, so the company opted for a float-sink tank instead.

After the tank, the flakes travel to a special friction cleaner with a frequency control, which allows operators to slow the blades, reducing force on the flakes and cutting down on fines generation, Leiber said. Friction cleaners are where most fines are generated, which is why they have the speed control to be as gentle as possible, he said.

Next, Zimmer said, the flakes go into a hot wash, cleaning them for use in food-contact packaging. No modifications were needed to adapt the STF hot wash system to thermoforms, because it is designed to be gentle.

The flakes then travel to a unique piece of STF equipment: a separating stage that removes “floaters” from “sinkers” using one stirring container and one separating container.

The closed and highly controlled system uses density to separate materials, but it’s different from standard float-sink tanks, which Leiber said they refer to as “swimming pools.” Zimmer said it results in very high purity of PET flakes.

When asked whether the water’s density will be modified, Leiber noted that, in some cases, additives are used to prevent air bubbles from building up on PET flakes and floating them. In this case, it’s still to be determined whether such an additive will be needed at Green Impact Plastics, but the separating unit will have a dosing station for additives, if needed.

Next, the flakes go to a twin friction cleaner with a frequency control, drying and cleaning the flakes, Zimmer said. The system does not use heat, he said.

Following that, the plastic goes to an air classifier, which uses air to remove any remaining paper or film labels from the heavier PET flakes. Following that, the material will travel to a classifier that will screen off the fines from the flakes. Zimmer explained the PET fines can be recycled, but they should be kept to a minimum because their value is lower. Sheet makers only want a certain percentage of fines in the PET flakes because fines can reduce their production abilities, he said. They are able to do production runs using only fines, but in that case, they’ll adjust their extruders to account for them.

Following the classifier, the flakes will go into a de-duster, followed by a Tomra flake sorter, which can detect and sort material down to 2 millimeters by color and polymer. Doyle of Tomra said the flake sorter will target and remove impurities, including all non-PET polymers and any colored plastic.

After the sorter, a filling station fills bags with the washed, clean flakes, which will be ready to be shipped down the road to rPlanet Earth.