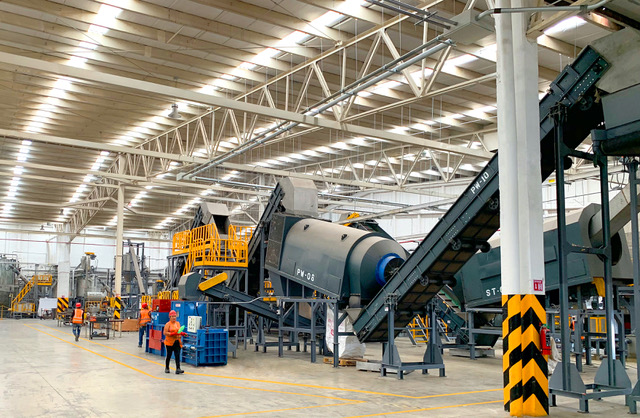 Direct Pack has acquired a Mexico-headquartered recycling operation with capacity to process 40 million pounds per year of PET. | Courtesy of Direct Pack.

Direct Pack, an Azusa, Calif.-headquartered packaging producer, recently purchased Atmosphera Verda, a Guadalajara, Mexico-based reclaimer. The company’s processing facility, which has been rebranded as Direct Pack Recycling, has the capacity to process 40 million pounds of recycled PET per year.

In a new step for Direct Pack, the processing facility will begin taking in recycled PET thermoforms and producing RPET resin for manufacturing new thermoform packaging.

“We have not had access to thermoform products until we started dealing directly with the MRFs,” said Craig Snedden, president of Direct Pack Inc., in an interview.

The company has been reaching out to many MRFs in the Western U.S., Snedden said, and has secured a supply of clear bales that have a high volume of PET thermoforms, largely separated from the bottle stream. The company’s new Mexico facility breaks the bales, washes the PET and processes it into a clean, washed flake that goes back into Direct Pack’s manufacturing process.

“I think what’s allowed us to take this step is the advances in sorting technology,” Snedden said.

Snedden said he feels MRFs are excited about the prospect of sending thermoforms for recovery, as the plastics would otherwise likely go to landfill. Historically, PET thermoforms often found their way into a mixed-plastic bale and were exported to China, Snedden added.

“Because that’s no longer an option, having us step up to take that material on is a win-win,” he said, noting the thermoform bales the company brings in include high percentages of products Direct Pack manufactured in the first place.

“There’s nothing more rewarding and satisfying than opening up these bales of post-consumer thermoforms and seeing our product returned,” Snedden said.

The Direct Pack project comes at a crucial time. The global recycling market shifts of the past couple years have caused municipal programs to alter the list of materials they collect. Recently, labeling initiative How2Recycle announced that enough programs have stopped accepting PET thermoforms to consider the products no longer “widely recyclable.”

The Direct Pack investment, however, demonstrates processor optimism around thermoform recycling. Creating a market for the material could give more MRFs the confidence to invest in sorting technology to produce thermoform-specific bales.

“If there are buyers for that material, certainly we would feel that the MRFs would want to support that revenue stream,” Snedden said. “We want them to know there is a growing market for this material.”

There are also technical challenges with processing thermoforms. Unlike PET bottles that generally contain a liquid beverage that’s relatively easy to rinse out, thermoforms frequently come in with food particulates, Snedden explained.

Additionally, there are adhesives and labels that present challenges, but Snedden said the equipment in place at the newly acquired facility is able to tackle those hurdles. It is “pretty much state of the art for addressing tougher products such as adhesives and paper substrate,” he said.

Direct Pack joins another recent PET thermoform processing operation in California. A company called Green Impact Polymers has announced plans for an operation in partnership with rPlanet Earth in the Los Angeles area.