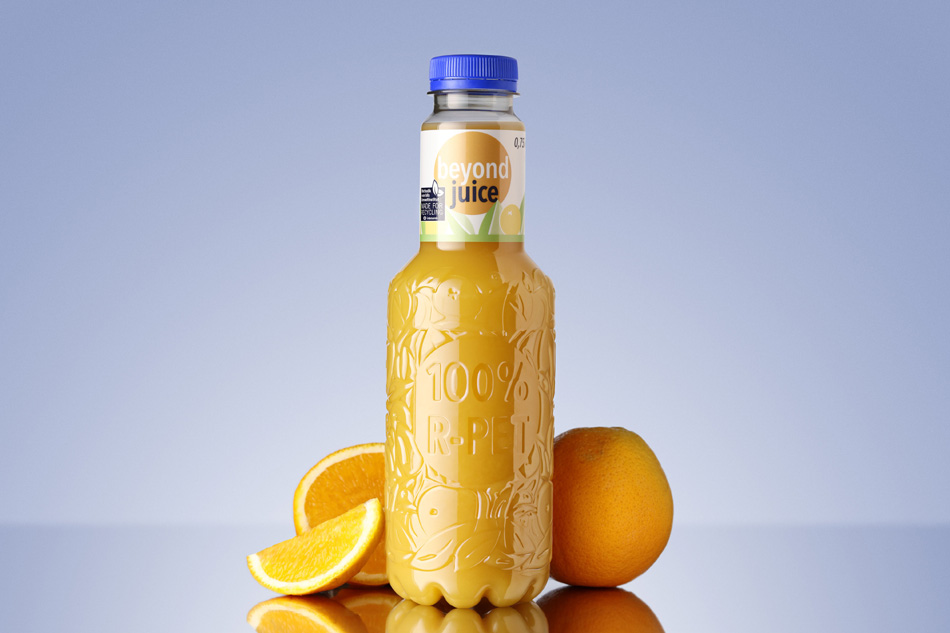 KHS unveiled a 100% RPET bottle with a barrier layer for protecting juices. | Courtesy of KHS

A packaging equipment manufacturer has announced a 100% RPET bottle with an extremely thin layer of silica to serve as a gas barrier.

Called Beyond Juice, the container uses technology from German company KHS Corpoplast. The bottle is made from FreshSafe PET, which uses an ultra-thin layer of silica to provide an oxygen and carbon dioxide barrier, protecting the juice or other sensitive beverage.

The barrier technology has already been used in the marketplace in limited applications. For example, FreshSafe PET has been used for Bronco Wine’s 187-milliliter PET wine bottles.

Additionally, Coca-Cola Canada announced in March it will use FreshSafe in its new 250-milliliter mini-bottles. The coating is used for soft drinks because the bottle’s small size can affect carbonation during the packaging process.

The Association of Plastic Recyclers (APR) and the European PET Bottle Platform (EPBP) have both confirmed the technology meets their recyclability guidelines.

Barrier rinses off in the wash

A company press release describes the barrier as a “wafer-thin layer of glass applied to the inside of the bottle.” The coating ensures that sensitive juices and spritzers, as examples, remain fresh up to 10 times longer than those fill in uncoated bottles, according to KHS.

The product provides an alternative to using multilayer bottles, where non-PET materials can end up damaging the recycled PET resin’s quality.

According to EPBP, the silicon oxide plasma-coating technology is fully compatible with PET recycling processes in Europe. The inert coating is applied as a colorless layer that’s less than 100 nanometers thick, according to EPBP. EPBP issued a letter in January 2005 confirming the technology, developed by SIG Corpoplast (which is now part of KHS), is fully compatible with Europe’s PET recycling processes.

KHS isn’t the only company to develop a silica-coating process for PET bottles. EPBP in 2004 issued a recycling compatibility letter for competing technologies Glaskin, developed by Tetra Pak, and BestPET, developed by Krones and Coca-Cola,.

When KHS developed its FreshSafe PET container, the company worked with German recycling and consulting company Interseroh, which awarded the bottle its “Made for Recycling” seal.

“Thanks to the seal on the label, for the first time consumers can now allow the bottle’s truly excellent recycling properties to help influence their decision to buy when standing in front of the supermarket shelf,” Julian Thielen, a packaging engineer at Interseroh, stated in the release.