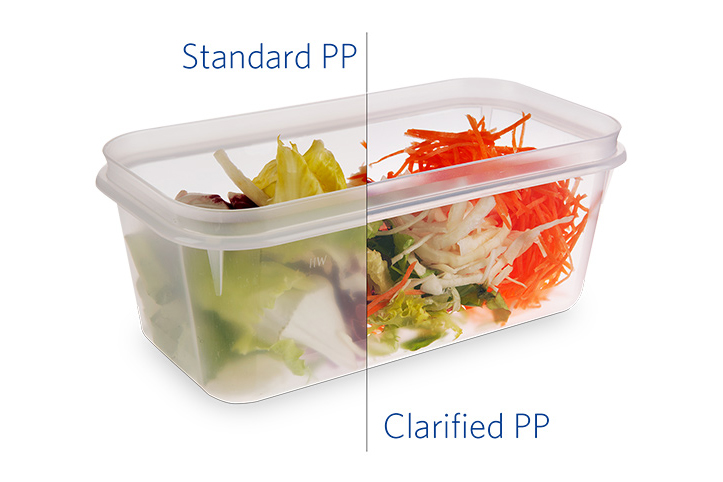 Photo provided by Milliken shows the results of the use of Millad NX 8000 clarifier.

A market-dominating polypropylene clarifier has undergone testing to prove that it neither complicates the plastics recycling process nor harms the finished product.

Milliken’s additives are used in plastic scrap coming in the doors of recycling facilities, and they are also used by reclaimers to boost the quality of their products. A member of APR, Milliken announced in May that its DeltaMax Performance Modifier is being used by reclaimer Aaron Industries to produce a new high melt flow recycled PP compound.

Milliken has also signed an exclusive supply agreement for PureCycle Technologies’ PP recycling facility in southern Ohio. The plant, which is under development, will utilize Procter & Gamble’s technology for removing colors, odors and other contaminants from post-consumer material.

The NX 8000 family of additives accounts for about 80% of the world’s clarified PP market, according to Milliken. During a July 23 APR webinar, Scott Trenor, senior polymer scientist at Milliken Chemical, talked about the additives and the testing that took place to ensure they are compatible with plastics recycling processes and markets. (Disclosure: APR owns Resource Recycling, Inc., the publisher of Plastics Recycling Update.)

How the clarifier works

A semicrystalline polymer, PP has crystals that are large enough to diffract light, which creates a hazy appearance, Trenor explained. The NX 8000 provides a clearer natural PP, allowing the plastic to compete with other materials such as PET, PS and even glass in some applications, Trenor said.

When PP is injected into a mold, nucleation of the crystals begins. The crystals will typically start growing around dust particles, talc, calcium carbonate or other non-PP materials in the mold, Trenor said. They grow at roughly equal rates, but because they start forming at different times, some of them end up being large enough to diffract light, creating the haze.

One approach is to add what’s called a particulate nucleator (Milliken’s line is called Hyperform). Essentially, the additive introduces small particles into the plastic, each of which births a crystal. The crystals end up being smaller and more uniform in size than if the additives weren’t used.

Instead of particles, however, the NX 8000 introduces a three-dimensional web in the plastic. The crystals grow off the surface of the web, providing a higher number of crystals, Trenor explained.

“The crystals that grow stay quite small, they don’t diffract light and you get a much clearer system,” he said. “And you’re able to control that and control the amount of haze and clarity that you have.”

“Just with changing the clarifier [to NX 8000], they were able to lower their molding temperatures from 245 degrees celsius down to about 100. And that reduced cycle times, the amount of time it took them to mold the individual cups, from a little over 32 seconds down to just below 30,” Trenor said. “And just that decrease in cycle and decrease in temperature reduced their costs of production by about $50 per ton of polypropylene processed.” 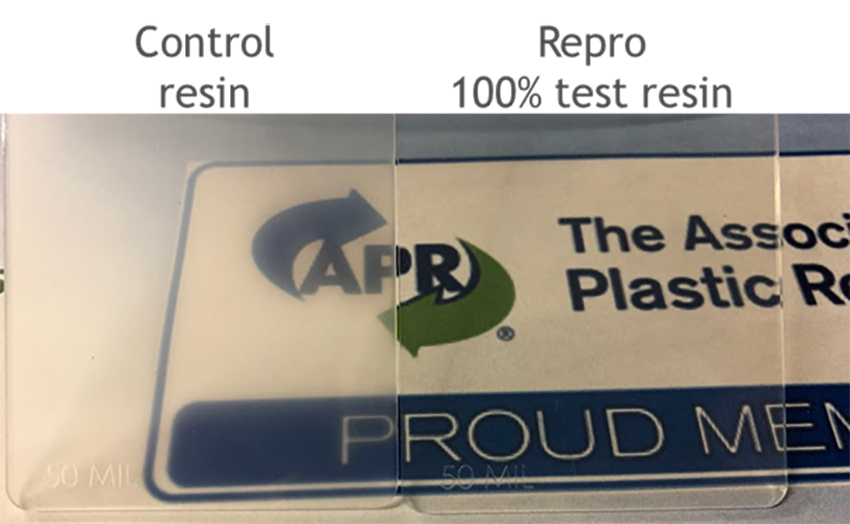 When it came time for testing, Milliken, which is headquartered in Spartanburg, S.C., produced a 12-melt-flow random copolymer PP to use as a control and a random copolymer PP with 4,000 parts per million of NX 8000 for testing. Both batches contained a fairly standard stabilizer package, Trenor said. They were both compounded on an 18-millimeter twin-screw extruder at about 30 kilograms per hour. The plastics were cooled in room temperature water before they were strand cut.

For third-party testing, the samples were shipped to independent testing and R&D lab Plastics Forming Enterprises (PFE), which is located in Amherst, N.H. PFE mixed the control resin and the NX 8000-containing resin to create three blends: 100% control, 25% additive and 75% control, and 50% additive and 50% control.

PFE noted the plastics with NX 8000 additive all floated, so they wouldn’t inhibit proper sorting in a float-sink tank, Trenor said. PFE also melted, filtered and pelletized the plastics, testing the processing impacts and the pellets. According to Trenor’s presentation, the samples with NX 8000 were on par with the control resin in terms of melt temperature, extruder pressure, melt flow, density, volatiles content, and more.

PFE then molded strips and tested those. It found their properties were fairly constant in terms of tensile strength, izod and color, Trenor said. The exception was increased flexural modulus in the samples with higher amounts of NX 8000. That is a standard outcome with the use of nucleators and clarifiers, he said.

After examining the test results, an APR review committee approved issuing Milliken a letter confirming the clarifier meets APR Critical Guidance Protocol. Companies that receive recognition use generally use the letters to help market their products.

Milliken sees a strong future for NX 8000, which has been on the market since 2007. In March, the company announced it will build the largest clarifier plant in its history in Blacksburg, S.C. Scheduled to begin operations in 2020, the facility will boost Milliken’s NX 8000 production capacity by 50%.

“We plan to stick with this product for a while,” Trenor said during the webinar.