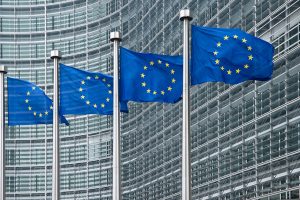 European Union leaders appear to have settled on a limit for trace amounts of flame retardants in recycled plastics. A reclaimer called the limit “workable,” but activists say it’s not nearly restrictive enough.

The European Commission seems set to agree that recycled plastics can contain decabromodiphenyl ether (decaBDE) at a level no higher than 500 parts per million, according to a press release from UK plastics reclaimer Axion Polymers. Last year, the European Union was considering a much stricter limit, 10 parts per million, which industry groups said would have effectively ended the recycling of plastics from electronics and electrical appliances.

Although decaBDE’s use has now been restricted to a limited number of applications, the chemical has been used as a flame retardant in electronics, automobiles and other durable goods. It’s one of a class of brominated flame retardants called polybrominated diphenyl ethers (PBDEs).

In September, Plastics Recycling Update reported on the law that would have limited decaBDE to 10 parts per million in products, including ones made with recycled plastic. The limit was included in an overall proposed update to the EU’s persistent organic pollutants (POPs) laws.

At the time, the European Recycling Industries’ Confederation (EuRIC) and the European Electronics Recyclers Association (EERA) both said plastics reclaimers simply couldn’t achieve that number. EERA noted that housings of old computer monitors can contain brominated flame retardants at levels up to 150,000 parts per million. EERA asked elected leaders to impose a limit of 1,000 parts per million for recycled plastic.

The European Union has three law-making branches: the European Commission, European Parliament and the Council of the European Union. In February, the parliament and council reached a deal to limit the sum of all BDEs, including decaBDE, to no more than 500 parts per million in recycled-content products. Now, the commission appears to have concurred.

Axion Polymers, which is based in Manchester, England, noted the limit of 500 parts per million would be tougher to achieve than the threshold recycling stakeholders had asked for, but facilities with advanced sorting and processing technologies such as Axion’s could still achieve it.

“Professional companies that have spent time trying to inform and address the EU Parliament in the management of decaBDEs in recycled plastics will welcome the recast of the EU directive as a sensible way forward,” Keith Freegard, Axion’s associate consultant, said in the statement.

Advocates for eliminating PBDEs and other toxic chemicals criticized the EU’s direction.

“The proposed 500-ppm limit paves the way for a massive inflow of decaBDE from discarded electronics into recycled plastic products, including children’s products,” according to a March letter from seven different groups to EU leaders.

Last month, one of the groups, the Center for International Environmental Law (CIEL), issued a statement saying the proposed limit will allow the world’s worst chemicals to re-enter the market in concentrations far above safe levels.

“While we welcome efforts to move to a circular economy, a toxic chemical does not become less toxic when it is recycled,” stated Giulia Carlini, staff attorney at CIEL. “For the circular economy to be a success, extreme caution must be taken to ensure it does not come at the expense of human health and the environment.”