How e-plastics could become feedstock for concrete 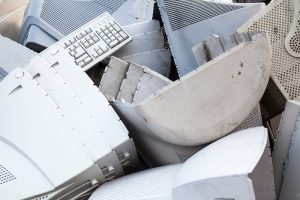 Researchers overseas say high-impact polystyrene from scrap electronics can be used as a replacement for sand in self-compacting concrete.

Scientists at the Vellore Institute of Technology in India found they could use HIPS granules instead of sand and still get suitable flow and strength properties. They also studied using fly ash from a power plant as a replacement for cement.

They found HIPS and fly ash could be used at levels of up to 30 percent without significantly reducing strength, according to their paper, which was published in February in the journal Buildings.

The study used round, smooth granules of HIPS that were between 1.18 and 3 millimeters in size. Their shape and texture improved the flowability of the concrete. At up to 30 percent HIPS replacement for sand, the reductions in compressive and split tensile strengths were minimal (less than 20 percent), and the concrete met the strength specification for M30-grade concrete, according to the paper.

The “M” grades of concrete refer to ratios of cement, sand and aggregate used in the concrete. Those ratios determine the final concrete’s strength. M30 has a ratio of 1 cement, 0.75 sand and 1.5 aggregate.