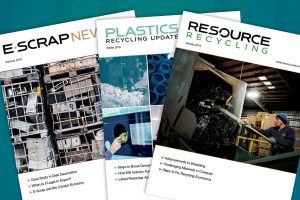 APR, headquartered in Washington, D.C., closed on the sale of Resource Recycling on March 1. Terms of the deal were not disclosed.

Resource Recycling, based in Portland, Ore., is the publisher of Plastics Recycling Update and puts on the annual Plastics Recycling Conference and Trade Show, which is the world’s largest plastics recycling event. That conference attracted 2,000 attendees in 2018. The 2019 show, which will be the 14th iteration, is taking place next week outside Washington, D.C.

Resource Recycling began nearly 40 years ago as a print magazine serving the growing municipal recycling sector. In the early 1990s, more communities were adding curbside recycling programs, in part to respond to wider environmental concerns and in part to take advantage of the economic upsides of landfill diversion.

Founded by Jerry Powell and his wife, Judy Roumpf, Resource Recycling added its plastics and e-scrap publications as those markets grew.

Powell and Roumpf remained the company’s owners up until the APR acquisition last week. APR had emerged as an important partner for the company in recent years, with the Plastics Recycling Conference and Trade Show hosting an annual event called the APR Technical Forum. The conference was also regularly co-located with APR member meetings.