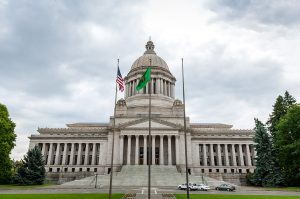 Lawmakers in Indiana and Washington are evaluating proposals that would shift end-of-life packaging management responsibilities from municipalities to product producers.

“As the impacts of China’s import restrictions on recyclable material unfolded throughout the United States in 2018, interest in EPR for packaging grew,” PSI recently announced.

Although EPR for packaging has taken effect throughout Canada and in parts of Europe, it has not been implemented in any U.S. state. U.S. EPR programs are common for electronics, paint and other potentially hazardous waste streams.

Committees in the Washington state House of Representative and Senate are considering EPR legislation on plastic packaging.

If passed, House Bill 1204 and Senate Bill 5397 require that producers, local governments and haulers develop and implement a packaging stewardship program for plastic materials by the beginning of 2022. The bill received hearings in the Senate Environment, Energy and Technology committee and was recommended with several changes to the original bill, including additional studies to take place before the program would be implemented. This week, the bill goes before the Senate Ways and Means committee. The House version of the bill is in the Committee on Environment and Energy, where it has had one hearing so far.

During a Jan. 31 Senate hearing on the original bill, Sego Jackson, strategic advisor for Seattle Public Utilities, spoke on behalf of the city department in favor of the legislation, putting it in the context of China’s ban on certain recovered material imports.

“Because our local materials recovery facilities don’t have the ability to sort beyond No. 1 and No. 2 bottles, they were shipping bales of unsorted plastic to China, to be sorted there; last year, China said, ‘No more,’” Jackson explained. The impact has been overwhelming in Seattle and elsewhere in the U.S.

But in British Columbia, Jackson noted, mixed plastics are sorted by resin and have more domestic markets. “The reason this is happening in British Columbia but not here is that packaging producers finance the product stewardship system and fund equipment and sorting costs,” he said.

The bill, he said, makes that possible in Washington. But opponents contend it would increase costs for producers, who would pass those costs on to consumers by raising prices. Both the tracking and reporting requirements, as well as the unknown cost of designing and implementing the stewardship program, led the Association of Washington Business (AWB) to come out against the proposal.

“Our members favor an approach which would seek to find and create beneficial and marketable uses for plastic packaging on a more targeted basis,” said Peter Godlewski, environmental government relations director for AWB, during the Jan. 31 hearing.

An EPR bill introduced in Indiana requires that producers manage or finance the recycling of printed paper and packaging. Senate Bill 619 was introduced Jan. 15 and referred to the Senate Environmental Affairs committee, which has yet to schedule a hearing on it. If approved, the program requirements would begin in 2021.

According to the Indiana bill, producer-driven recycling programs “can improve collection efficiency, increase quality and value of collected materials, and create economies of scale to reduce expenses.”

The producer-funded system would be required to have a plan that can achieve a minimum packaging recycling rate of 50 percent by 2025. By 2028, that rate target would rise to 60 percent. Additionally, producer plans would identify target recycling rates for each material collected in the stream. Documents included with the bill indicate the state currently has a municipal recycling rate of 16.7 percent.

Smaller producers qualify for exemptions to the requirements. Packaging producers with less than $250,000 in gross sales in the state each year are exempt altogether, and those doing between $250,000 and $500,000 pay a nominal fee but are otherwise exempt from the responsibilities of larger companies.