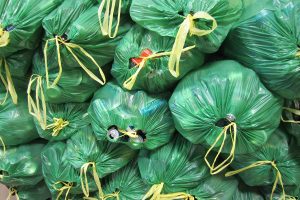 The longest-running container deposit program in the country expects to hit its highest redemption rate in years, shortly after the program doubled its deposit to 10 cents.

OBRC, which administers collection and transportation of covered beverage containers, used to hover around 64 to 65 percent for its redemption rate each year. A stagnating rate triggered a state law that doubled Oregon’s container deposit from 5 to 10 cents in 2017, part of an effort to spur greater redemption.

The legislation had the intended result. In 2017, redemption shot up to 82 percent for the months after the deposit doubled, said Joel Schoening, OBRC’s community relations manager. The full-year figure was 73%, and the rate is expected to be even higher when the 2018 results are in.

It’s not the highest rate in Oregon deposit history, according to OBRC, as redemption rates were higher than 90 percent in the 1970s, shortly after the program launched. But because the number of containers covered under the program has grown substantially since then, the 2018 program year will mark the highest container volume ever collected under the deposit system.

Other factors play into rate increase

Although the 10-cent deposit is a substantial factor in the rate spike, other components played into it as well.

Consumers have new and more convenient methods to return containers. OBRC in 2016 began ramping up its “Green Bag” program, which allows users to fill bags with redeemable containers and drop them off at designated sites. The bags are marked with a user-specific barcode, and after processing, the deposit value is placed in an account controlled by the consumer. The program is an alternative to the traditional reverse vending machine service.

The convenience is evidently proving popular: From 2017 to 2018, the Green Bag user base grew by 50 percent, Schoening said.

“We also saw substantial growth in the amount of containers coming back through that program as a result,” he added.

By the end of the third quarter last year, there were nearly 289,000 account users, and OBRC was processing some 14,000 Green Bags per day, according to the organization’s quarterly report.

The higher redemption rate is even more notable because it comes as more container types were added to the deposit program in 2018, meaning the denominator for the rate increased. OBRC knew this would likely mean significant capacity needs, so the organization invested in additional infrastructure at the end of 2017 to prepare for the increase.

“One thing we didn’t anticipate was that the new containers would come back at such high rates, so fast,” Schoening said.

When water bottles were added to the deposit program in 2009, there was a lag period before consumers fully understood those containers were redeemable.

“We were assuming there would be a similar trajectory for things like Gatorade and energy drinks, but what we found was that because of the dime, people figured that out right away,” he said.

The significant redemption rate increase comes against a backdrop of recycling markets in turmoil.

“The timing of the expansion of the bottle bill couldn’t have been better, related to international markets,” Schoening said. “From a recycling perspective, we’re accepting more materials and recycling them domestically, exactly at the time when global markets are really disrupted.”

Two key factors are helping to shield the program from the worst market impacts. For one, the program handles a very clean material stream, contrasting starkly with single-stream curbside recycling systems.

“Basically we’re only taking glass, plastic and aluminum, and we can separate that at the source,” Schoening said. “We have very low contamination rates, which is a benefit of the deposit system.”

Second, OBRC sends all of its collected material to domestic outlets, and the fluctuation in export markets hasn’t impacted the organization’s ability to move commodities. All collected plastic and glass currently goes to Oregon buyers (ORPET in St. Helens, Ore. and Owens-Illinois in Portland, respectively). Aluminum is sent to a buyer in Alabama.

Although the program hasn’t seen disruptions in moving collected material, it has experienced the near universal impact of fluctuating prices.

“Markets affect what we get for the materials, so that definitely impacts our bottom line,” Schoening said.