How can jurisdictions create the strongest possible program for effectively collecting and recycling beverage containers?

One notable case study can be seen in the Canadian province of Manitoba, which over the better part of the last decade has been combining the efficiency and convenience of a curbside recycling system with the effectiveness of a province-wide away from home beverage container recycling program. It uses a Container Recycling Fee (CRF) charged to beverage producers to fund the cost of the entire program, including outreach and infrastructure.

The group that has spearheaded and coordinated the effort is the industry-operated Canadian Beverage Container Recycling Association, or CBCRA. The group’s work to enhance harmonization and organization across the province has resulted in steady increases in beverage container recycling.

The provincial program now stands as an example of how the beverage industry can successfully integrate away-from-home container recovery with at-home recovery systems. In fact, the Recycle Everywhere logo consistently ranks among the most recognized logos in Manitoba (along with the Winnipeg Jets hockey franchise).

From a mandate to a model

The force for change in the province came by way of policy. In 2008, beverage producers and distributers supplying products into Manitoba were mandated by the provincial government to reach a 75 percent beverage container recovery rate target.

With the broad support for a convenient and comprehensive system, CBCRA was subsequently formed, and with that, beverage brand owners and distributors created a new model for recycling beverage containers that was unprecedented in the industry. At the center of it is CBCRA’s province-wide Recycle Everywhere program, which strives to leverage the existing residential recycling system and educate Manitobans on beverage container recycling. The goal is to ensure that it is convenient to recycle empty beverage containers no matter where citizens live, work or play.

It should be noted that a deposit return system has been in place for beer containers for a number of decades in Manitoba. This system operates well and requires consumers to bring back their containers to beer vendors or hotels with direct beer sales. Importantly, when the beverage industry created and developed the CBCRA hybrid model, the Manitoba government endorsed this comprehensive approach rather than having some recyclables managed in a separate system, such as deposit return. The province recognized the comprehensive approach’s benefits to the curbside system as it keeps the high-value aluminum and PET in that system, as well as the convenience it would provide to consumers.

Today, beer containers continue to be collected via the deposit system, and non-beer beverage containers are covered by the comprehensive CBCRA hybrid model.

And, as hinted at earlier, CBCRA’s Recycle Everywhere program takes things a step further with an extensive away-from-home recycling program. From one corner of the province to another, Recycle Everywhere has partnered with communities, municipalities, schools, businesses, institutions, parks, festivals and event organizers to provide them with Recycle Everywhere bins free of charge. Partners simply arrange to move the collected beverage containers to a recycler. 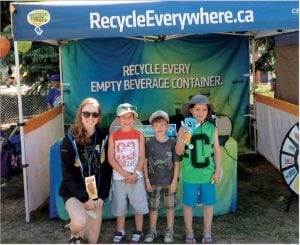 Recycle Everywhere Street Teams visit festivals and other events across Manitoba each year to help spread recycling outreach and elicit feedback from citizens.

This away-from-home recycling program has distributed over 57,000 away-from-home Recycle Everywhere bins across the province, and the number continues to grow.

It’s also important to point out that the high level of access for beverage container recycling is provided at a very low cost to consumers. Beverage producers pay a 2-cent CRF for every non-alcoholic, non-dairy beverage container they supply into the Manitoba market. This fee funds the entire Recycle Everywhere operation, including infrastructure, signage, technical support, and promotion and education. In addition, the CRF funds up to 80 percent of the cost to collect, sort and market used beverage containers in residential recycling programs. CBCRA is aware that the fee is usually passed on from producers to retailers to consumers.

In other provinces in Canada, such as those with deposit systems, consumers pay higher fees upfront and only receive a portion of these fees back. For example, consumers in some Canadian deposit jurisdictions pay a non-refundable CRF – in addition to the deposit amount – that is as high as 12 cents per plastic bottle. The Manitoba program costs millions of dollars less to run when compared with some deposit jurisdictions, and it has led to impressive results.

Lastly, the CBCRA system results in a reduced environmental footprint on the collection side, as a single recycling vehicle can collect all recyclable materials, including beverage containers, from curbside bins for hundreds of households or locations. It can be argued that such a structure causes fewer environmental impacts than systems that require consumers to drive to return their containers to a recycling depot.

Access to recycling infrastructure is important, but it is only part of the equation. People need to know what goes in the bin, and they need to have beverage container recycling top of mind every time they go to dispose of their empty container. This is why CBCRA undertakes an extensive, province-wide promotion and education campaign each year to encourage Manitobans to recycle every empty beverage container.

An important part of the effort is analyzing the effectiveness of outreach. Recycle Everywhere commissions third-party research projects as part of its promotion and education initiatives. This information is then used to confirm that the communications strategy is increasing Manitobans’ commitment to recycling empty beverage containers, and it gives valuable feedback to CBCRA.

The consumer insights that are gained are then expressed in advertising campaigns that resonate because they are informed by real concerns.

For instance, CBCRA research has shown in the past that there was confusion over which types of containers are recyclable, a fact that led the group to focus on clarifying the details in advertising campaigns. In addition, research has shown that different age groups (18-24, 25-54, 55-plus) have different recycling habits and respond to different types of advertising (for example, humorous versus heartfelt). CBCRA created targeted advertising campaigns to address these different behavior types and media consumption habits.

The Recycle Everywhere program’s promotion and education efforts also include local sponsorships, public relations, social media and more. In addition, every summer, the Recycle Everywhere Street Teams travel across Manitoba to promote beverage container recycling at festivals and events. Along with games, giveaways and educational material, the Street Teams bring in recycling infrastructure to make each event green and clean.

This allows program representatives to reach thousands of Manitobans face-to-face with a unified beverage container recycling message. In fact, much of the best consumer feedback comes back though the Street Teams.

Every year, the provincial beverage container program matures, expands, innovates and builds on what was previously done. This is achieved by actively listening to what Manitobans are saying about recycling, and tapping into those insights.

So how do we know Manitoba is moving in the right direction? The progress is proven in data collected by the program.

That recovery rate growth is in some ways simply a marker for a much larger and lasting impact that CBCRA and Recycle Everywhere are having in Manitoba. With tens of thousands of Recycle Everywhere bins distributed for free to public spaces across the province, more Manitobans have access to beverage container recycling at work, home and at play than ever before.

Furthermore, annual third-party research has shown that program outreach campaigns have had a clear and positive impact on recycling attitudes and behavior, and have positively affected how consumers think about recycling all kinds of products and packaging.

That education begins in schools. Over 98 percent of students in Manitoba now have access to recycling in primary and secondary schools because of Recycle Everywhere’s school program. Students bring this message home to parents, and they eventually grow up and become parents themselves – by educating people early in life, whole generations change the way they think about our resources.

What’s more, the litter rate in major Manitoba urban centers has gone down dramatically since the introduction of Recycle Everywhere, decreasing by up to 87 percent in cities that are analyzed by third-party litter audit firms each year. Recycling is actually leaving cityscapes and streets cleaner. For communities and community leaders this is as important as the dramatic recovery rate increase. 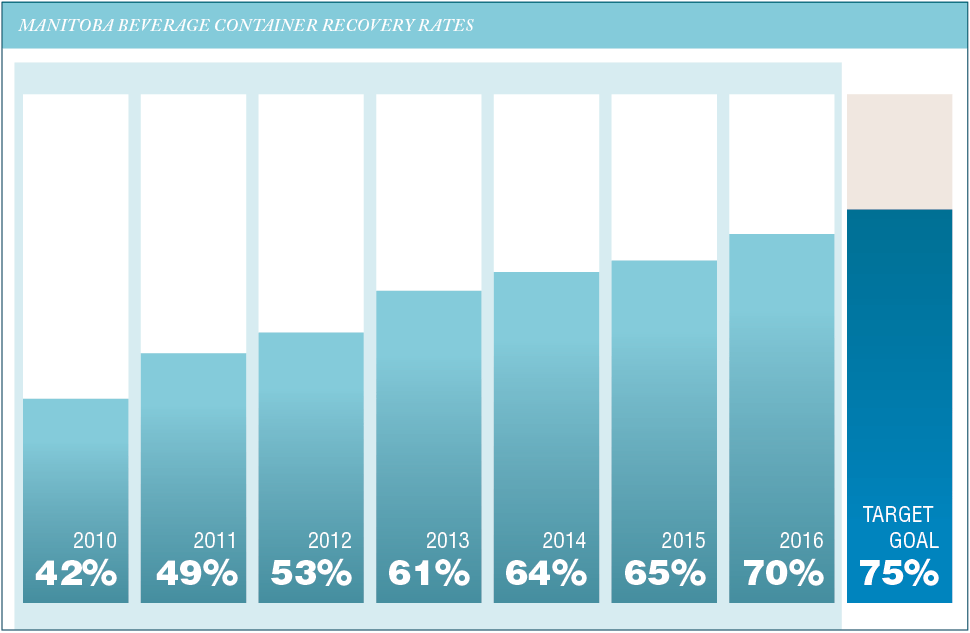 CBCRA makes it easy for Manitobans to recycle beverage containers through the many programs and initiatives regularly undertaken. Every year, more Recycle Everywhere bins are placed in public and residential spaces, the network of community and partner outreach is expanded, and engagement and education activities are increased.

Fueled by constant innovation, these pieces empower consumers to recycle every empty beverage container by providing accessible infrastructure and knowledge.

By building awareness about the importance of recycling, CBCRA is helping the people of Manitoba understand that every beverage container and every person matters. This model has helped the province become recognized as a leader of beverage container recycling, but ultimately the goal is to recover even more.

Arielle Gurevich is the communications manager for CBCRA and its Recycle Everywhere program. For more information, please visit recycleeverywhere.ca or cbcra-acrcb.org.