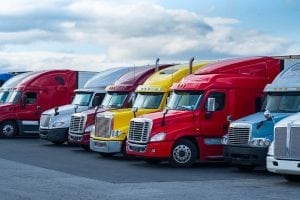 Plastics recycling companies are seeing higher freight costs amid a tight trucking market, and the logistical challenges are predicted to increase in the coming years.

“These factors and others have made us work closer with our customers and suppliers to allow more time for pick-ups and deliveries,” said Matt Denton, logistics manager for Denton Plastics in Portland, Ore. “It also has forced us to look at other ways of transportation other than over-the-road, like going by rail or doing backhauls with the same truck.”

“It remains increasingly difficult to compete outside local markets given the high freight rates governing transportation lanes west to east,” he said.

The freight market has been increasingly tight over the past year, and freight experts say the pressure is not over yet.

In interviews with companies and associations around the country, Plastics Recycling Update learned that recycling facilities are being forced to store material amid shipping delays, and that rural programs are feeling the effects worse than others. Impacts vary by region of the U.S. and sometimes by parts of a state. But across the board, one factor is the same.

As Plastics Recycling Update previously reported, proponents say the regulation will promote safety by effectively enforcing restrictions on the duration of time a trucker can be on the road before resting. Critics say they introduce unnecessary costs, delays and confusion.

The effects are very visible in parts of Nebraska, where the state’s rural recycling programs rely on long-distance transportation far more than their urban counterparts. Julie Diegel of the Nebraska Recycling Council (NRC) provided Plastics Recycling Update with information gathered from council members.

In western Nebraska, one program operator put it bluntly. Pamela Pacheco of ABC Recycling noted that although her program operates in a city near a major freeway, “Nebraska is Timbuktu” when it comes to markets. Her company is seeing increased transportation costs and penalties for not loading on time. The combination of these effects with other current industry trends, such as additional restrictions from mills, have caused “a cash-flow pinch” for ABC.

In the Pacific Northwest, Denton Plastics has seen an uptick in truck delays for a number of reasons. Matt Denton said company has to “respond on a case-by-case basis, almost daily.”

“This is where having good relationships with truckers is so important,” Denton said. “Building trust and not splitting nickels is important not just to us, but to the haulers. They know they can rely on us for the loads and get paid quickly.”