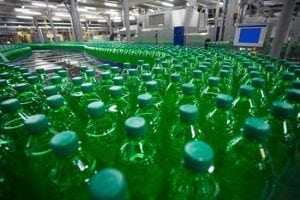 A recycling process using a rotary drum and infrared radiation effectively decontaminates PET, according to the FDA. The agency also gave a nod to recycling a PP/HDPE blend into food packaging.

Those were a couple of green lights the U.S. Food and Drug Administration (FDA) recently gave to recycle post-consumer plastic into food and drink packaging. The agency issued letters of no objection (LNOs) to six companies over the past seven months.

The documents allow plastics reclaimers to use the technologies to produce recycled resins for food and drink packaging. In issuing the letters, the FDA was convinced the recycling processes would result in contaminant concentrations of 0.5 parts per billion or less in the food, below its “threshold of regulatory concern.”

In this twice-yearly roundup, Plastics Recycling Update looks at applications from a number of international companies to recycle PET, PP/HDPE blend and HDPE into food and drink packaging. The most recent roundup covered the second half of 2017.

An Aug. 13 LNO for Swiss company Polymetrix covers the recycling of post-consumer PET into food packaging. The RPET could be used in packaging at 100 percent recycled content. The proposed recycling process is a secondary recycling technology from German company Kreyenborg Plant Technology (see Kreyenborg entry below for more information).

According to the LNO, the packaging could be used on food filled and stored at a range of temperatures, from frozen up to hot-filled or pasteurized (above 150 degrees Fahrenheit)

The LNO was issued to the German Fraunhofer Institute for Process Engineering and Packaging (IVV), which submitted the application on behalf of Polymetrix.

The FDA on July 27 issued an LNO allowing Nuvida Plastic Technologies to sell a post-consumer PP/HDPE blend for use in food packaging. The application was submitted by Keller and Heckman on behalf of Nuvida.

The letter covers the use of recycled PP/HDPE at up to 60 percent recycled content. The packaging could be used to hold food filled and stored at a range of temperatures, from frozen up to boiling.

A July 27 LNO covers the recycling of post-consumer PET into sheet for food packaging. The application was submitted by the Fraunhofer IVV on behalf of Resipol Comêrcio de Residuos e Polimeros Plâstico, a Brazilian company.

According to the letter, the recycled PET could be used at up to 100 percent recycled content. The resulting sheet would be used to make packaging for fruits, veggies, shelled eggs and bakery products. It would be limited to holding food for up to 35 days at room temperature.

A March 22 LNO covers the use of a “super clean” process to produce post-consumer HDPE for use in food and drink packaging.

Fraunhofer IVV submitted the application on behalf of Total Research and Technology Feluy, a Belgian operation of global petrochemicals company Total. The letter covers the use of Total’s secondary recycling process to generate HDPE for use in bottles and trays at up to 60 percent recycled content. The packaging could hold milk, juices, meats and other foods at room and refrigeration temperatures only.

The feedstock consists of post-consumer bottles, such as milk jugs.

Total issued a press release in April about the letter, noting that its rPE 6306 compound, which contains a “virgin booster product,” is now available.

“We had already demonstrated that a compound containing post-consumer HDPE and a specifically developed virgin ‘booster’ product provides the same or even better performance than conventional virgin product,” Jean Viallefont, vice president Polymers Europe for Total, stated in the release. “Now, we are pleased to have received the non-objection letter from the US Food and Drug Administration confirming the success of our efforts in upgrading recyclates. It is a milestone in the approval process. Our development contributes to a Circular Economy by enabling the use of recyclates in more and more applications.”

Also on March 22, the FDA issued an LNO for a process to create post-consumer PET for use in food packaging. In this case, Fraunhofer IVV applied on behalf of Reifenhäuser Cast Sheet Coating, a German manufacturer of plastics processing equipment.

The letter covers the use of Reifenhäuser’s secondary recycling process to generate PET for use in sheet, which could contain up to 100 percent recycled content.

The FDA issued a Feb. 8 LNO covering the recycling of post-consumer PET into thermoformed food packages. Fraunhofer IVV submitted the application on behalf of Kreyenborg, which supplies equipment for the recycling of plastics and the processing of foods and chemicals.

The letter green-lights the use of Kreyenborg’s secondary recycling process to produce PCR for sheet at up to 100 percent recycled content. Kreyenborg issued a press release about the approval in late April. The company said its IR-CLEAN System uses a rotary drum and infrared radiation to move and heat the plastic, decontaminating it without the need for any kind of vacuum technology.

On Aug. 9, the FDA issue another LNO to Kreyenborg for the use of RPET in food packaging at up to 100 percent recycled content. The LNO covers a modified version of the Kreyenborg process the FDA previously reviewed. Fraunhofer IVV also submitted that application on behalf of Kreyenborg.