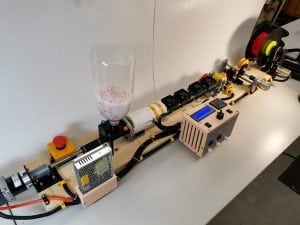 Researchers have developed an improved version of a desktop extruder that produces filament for 3D printers, and they’ve made assembly instructions available online for free.

Students at the Michigan Technological University in Houghton, Mich. have developed a version of what’s called the Recyclebot, a small plastics recycling system.

“We have developed a new version of the Recyclebot with enough control to produce commercial-grade filament from more or less anything – we have demonstrated it with pellets, regrind, and even waste composites like wood,” Joshua Pearce, Michigan Tech professor, wrote to Plastics Recycling Update. “The plans are fully open source and most of the parts of the new machine design are themselves 3D printable.”

In an interview, Pearce said he sees opportunities for plastics reclaimers in a few areas. First, the equipment is a low-cost way of testing composites and polymer mixes. Reclaimers can also use it to produce 3D printer filament, a relatively small market still but one in which markups are still enormous. Lastly, with wider use of the Recyclebot extruders, reclaimers will have a new market to sell flake into.

“It’s still a small market … but it’s growing significantly,” he said. “This might be something that some of them would be interested in, and our device can help them immediately enter the market.”

Full plans and assembly instructions have been published in Elsevier’s HardwareX. This paper explains how to build a model called the “RepRapable Recyclebot,” so named because it caters to a 3D printer community focused on open source self-replicating rapid prototypers, known as RepRaps, according to the paper.

According to the online paper, a RepRapable Recyclebot can be built for less than $700 in materials and fabricated in about 24 hours. The RepRapable Recyclebot produces filament for 3D printers at a rate of about 1 pound every hour and 10 minutes. It uses 0.11 kilowatt hours of electricity for every pound produced. 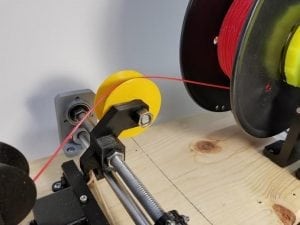 The system can process polymers with extrusion temperatures of less than 250 degrees celsius. It is “capable of manufacturing custom filament over a wide range of thermo polymers and composites for material science studies of new materials and recyclability studies, as well as research on novel applications of fused filament based 3-D printing,” according to the paper.

The paper acknowledges this isn’t the first desktop-sized extrusion system to be developed and have its plans made available to anybody. Plastics Recycling Update has covered other desktop extruder products, many of which were mentioned by the paper, and this publication even wrote about one, the Filabot, as far back as January 2013.

But developers of the RepRapable Recyclebot say it’s made with parts that can be found in hardware stores or purchased online. Additionally, many of the parts can be 3D printed, so filament from the equipment can be used to make another one.

Additionally, the paper notes it has other unique features, such as an adjustable hopper size and shape with emptying feature, aluminum cooling path to provide more cooling than passive or forced-air methods, adjustable traverse for different spool sizes, and a modular design allowing for the addition of water bath cooling, a pelletizer or injection molding system.

“These attributes make it ideal as a research system for those investigating novel filaments,” according to the paper.

Pearce said he plans to have his students in the upcoming fall semester use the equipment to make as many different polymer composites as possible.