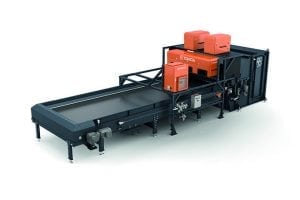 “This enhances the previous capability of Tomra’s Autosort machine to separate multilayer trays,” according to a company press release. “This breakthrough is commercially significant because small but critical differences in the chemical properties of PET food trays and PET bottles mean that they must be separated for equivalent-product recycling.”

According to the company, a couple of advancements allows for the improved recognition abilities. The Sharp Eye technology introduces a larger lens for higher light intensity. Also key is the company’s Flying Beam technology, a near-infrared scanning system with point-scanning. Together, they allow the sorter to distinguish subtle molecular differences in material.