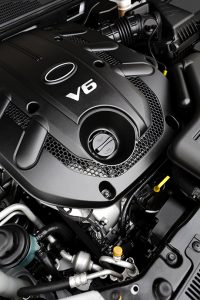 Example of a nylon component in an automotive application.

A chemicals company that makes a nylon-boosting additive says it’s now developing a product to improve properties of recycled PET.

Prasad Taranekar, marketing manager for Vertellus, recently spoke with Plastics Recycling Update about the product. He said the Indianapolis-based company plans to release a similar product for PET early next year. Among other applications, it would prove useful for incorporating more RPET into fibers, he said.

ZeMac is an alternative to solid state polymerization (SSP) processes, which are also used to manufacture high relative viscosity nylon, according to a Vertellus press release. The additive, which is based on alternating ethylene and maleic anhydride groups, helps compounders produce a high-viscosity pellet for a range of extrusion applications, including auto parts, pipes, stock shape and more.

Higher relative viscosities are required in certain plastics to maintain adequate melt strength during extrusion for applications such as profile parts, blow molding, thermoforming, films and stock shape articles. Additional benefits of higher relative viscosity resins are to create highly durable and strong parts. In contrast, lower to medium viscosity plastics are used primarily in injection molding applications where high flow is needed to have high productivity and intricate parts. 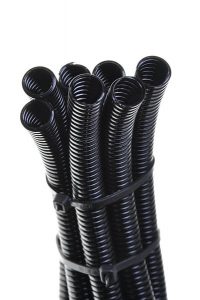 Examples of nylon items made with the ZeMac additive.

Recycled nylon, particularly from post-consumer sources, has a lower relative viscosity and poorer mechanical properties than virgin material, according to Vertellus. That limits its ability to be used in extrusion applications and parts that are performance driven for automotive and high-end consumer end-use applications.

“A number of Vertellus’ customers are able to mix 20 percent or more recycled nylon in with virgin system and yet meet the desired specifications of high end-applications both in extrusion and injection molding areas thanks to the use of ZeMac plastic additive technology,” Taranekar said. “The use of recycled content reduces their costs and gives them a sustainability story to tell their customers.”

The dosage rate for ZeMac is 0.3 percent to 0.5 percent, which adds between 1 cent and 3 cents per pound to the cost of the plastic, he said.

While ZeMac has been out for decades, Vertellus began marketing it to the plastics industry in recent years. In November, the company presented it at the PLASTIMAGEN conference and trade show in Mexico City. That gave it a chance to gauge interest from the plastics recycling industry, Taranekar said.

Taranekar said his company is now working to develop a similar product for PET.

Because recovered PET streams tend to be cleaner than recovered nylon, however, Vertellus envisions that the patent-pending additive technology will allow molders to use 100 percent RPET in higher-end products, without mixing in any virgin content.

Taranekar said those higher-end applications include fiber for textiles, injection-molded articles and sheets. Those are applications where manufacturers currently utilize SSP reactors to boost viscosity before extrusion, he said. But using the reactors to greatly boost viscosity in RPET takes time and affects productivity, he said, and using the compounding method with the new additive technology will help reduce SSP-related costs.

Vertellus plans to have sampling begin during the first quarter of 2018. It want to get enough feedback before going to 100 percent production of the PET additive, he said.