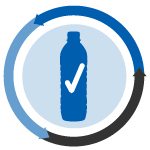 A scientific panel signed off on a slew of PET recycling technologies this year, determining they produce clean RPET that can be used in food and drink packaging.

The Panel on Food Contact Materials, Enzymes, Flavourings and Processing Aids (CEF) signed off on technologies provided by Erema, Krones, Next Generation Group (NGR) and Starlinger.

CEF is part of the European Food Safety Authority (EFSA). In the European Union, recycled plastics and additives can only be used in food and beverage packaging if they’re first reviewed by EFSA for safety. Recycling companies submit applications to individual countries, which apply to the EFSA on their behalf.

The following is a roundup of recent opinions from CEF, organized alphabetically by the recycling technology involved (previous entries were published last fall).

In all cases, the proposed feedstock consists of washed and dried flakes from post-consumer PET bottles collected curbside and via deposit redemption systems.

On May 4, CEF decided a number of Erema technologies could be used to product RPET flakes, pellets and sheet suitable for food and drink packaging. The application covered three of the company’s process technologies: Multi-Purpose Reactor (MPR), Basic and Advanced.

In all three processes, the MPR is used to decontaminate PET by exposing the plastic to high temperatures and a vacuum while the flakes are being mixed by a bottom-mounted rotating mixer. In the MPR process, only this step is used. In the Erema Basic process, an extrusion step is added to produce sheet or pellets. In the Erema Advanced process, the flakes are first sent into a continuous reactor for cleaning before they’re moved to the MPR and extruder.

CEF said the percentage of recycled content allowed in the final packaging depends on the amount of time the RPET spends in the MPR. If it’s in there for enough time, however, it can be used in 100 percent RPET packaging, CEF said.

The application was submitted by the Austrian Ministry of Health on behalf of Erema Engineering Recycling Maschinen und Anlagen of Austria.

Also on May 4, the CEF approved applications from specific companies hoping to use a couple of the Erema processes. It approved applications for Coexpan Deutschland of Germany, SP GROUP (The New Plastienvase) of Spain and 4PET Recycling of the Netherlands to use the Erema Basic process. The governments of Germany, Spain and the Netherlands applied on behalf of their respective companies. The German and Spanish applications were to produce sheet for thermoforming into food packaging, and the Dutch application is to produce pellets for other companies to use to create bottles and thermoforms. CEF approved the German and Spanish application at up to 100 percent recycled content but limited the Dutch request to 90 percent recycled content.

Additionally, CEF approved an application from Alimpet of Italy to use the Erema MPR process to produce flakes for 100 percent RPET food packaging. The end product will be sheet for thermoforming into food packages. That request was submitted by the Italian Ministry of Health on behalf of the company.

On Sept. 21, the CEF determined that a PET recycling technology from Krones is suitable for producing food and drink packaging at up to 100 percent recycled content.

Krones process includes three main steps, using flakes that have been hot caustic washed and dried: extrusion into pellets, crystallization of pellets and decontamination of pellets at high temperature under vacuum.

The application was submitted by the German Federal Office of Consumer Protection and Food Safety on behalf of Krones.

On June 13, the CEF decided NGR’s technology could be used to recycled PET into 100 percent recycled content films and trays for food packaging.

Using the clean flakes, NGR’s recycling process includes three additional steps: melting and degassing; decontamination of the melt in a melt-state polycondensation process, which exposes it to high temperatures and a vacuum; and homogenization of the melt, extrusion under vacuum and granulation into pellets.

The application was submitted by the German Federal Office of Consumer Protection and Food Safety on behalf Märkische Faser of Germany.

On May 4 and again on June 13, the CEF decided Starlinger Decon technology is suitable for recycling PET into food and beverage packaging at 100 percent recycled content.

The input is washed and dried flakes. Starlinger’s Decon process then preheats the flakes in batch reactors. Then, the flakes are moved into a solid-state polycondensation (SSP) continuous reactor, which exposes them to high temperatures under a vacuum, while a periodic gas flow is used to remove contaminants from the flakes.

The May 4 decision was made for Coexpan Montonate of Italy, and the June 13 decision was for Veroniki Ecogrup of Romania. The German Federal Office of Consumer Protection and Food Safety submitted applications on behalf of both companies.

On June 14, the CEF determined that Starlinger IV+ technology can be used to recycled PET in food and drink packaging at up to 100 percent recycled content.

The application was submitted by the German Federal Office of Consumer Protection and Food Safety on behalf of PEGRA-V of Germany.