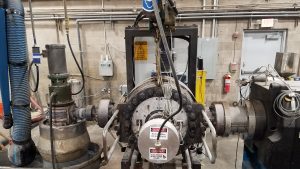 For compounders, buying cheaper regrind may be an attractive option, but the additional contamination can also mean higher processing costs. A case study shows how Aaron Industries reduced those costs and boosted throughputs by installing a continuous melt filter system.

The Leominster, Mass.-based company is one of the largest plastics recycling firms and compounders in the Northeast, processing more than 1 million pounds a week. Aaron Industries purchases regrind and sends it through extruders at its 100,000-square-foot facility.

In the past, the company has relied on slide-plate screen-changers to remove contaminants from melt from its extruders, according to information provided by recycling equipment company ADG Solutions.

“Even a slight amount of contamination can clog up a slide-plate screen changer pretty quickly,” Robert G. Tocci, Aaron Industries’ company’s founder and president, stated. “As that contamination builds up on the screen, pressure increases to unacceptable levels until a screen change is needed.”

Dirty batches can demand a lot of attention from a staff member, preventing them from running more than one machine at a time. And contamination levels can sometimes get so bad the company will have to stop processing and send dirty regrind to an outside firm with a float-sink tank, which removes contaminants but at a cost of about 10 cents per pound.

When Aaron Industries decided to upgrade its older extrusion equipment, it also replaced an aging side-plate screen changer with an ADG Solutions Continuous Filter Operation (CFO) melt-filtration system for its largest extruder, a six-inch, 600-horsepower Davis-Standard unit. It chose a mid-sized unit capable of throughputs of 3,500 pounds per hour.

With the CFO unit, when waste builds up on the filter surface, a rotating blade scrapes and removes it via a discharge port. The system can be activated by the push of a button, a timer or a pressure sensor. It can endure 2,000 to 3,000 cleanings before it needs to be replaced, according to ADG Solutions.

At Aaron Industries, the CFO unit helped boost extruder output by 5 percent to 7 percent, according ADG Solutions. It also help maintain a more consistent pressure into the extruder, resulting in more consistent operation. At the same time, labor and filter replacement costs dropped.

“We’ve been able to effectively process less expensive feedstocks than we could before,” Tocci stated. “And we haven’t had to do a lot of sink-float cleaning, since the CFO can handle a much higher degree of contamination.”