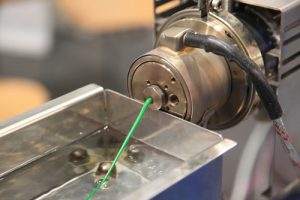 When added to recycled plastic melt streams, a specially designed particle can break up and scatter contaminants, boost throughputs and help disperse other additives, according to the product’s developer.

Ecopuro has created an engineered structural particle it calls “Boundary Breaker.” The company, which performs its technical operations in Grand Rapids, Mich. and has its headquarters in Denver, recently provided Plastics Recycling Update with details on the product, including how it can reduce plastics recycling costs and boost the properties of recycled-plastic products.

Rather than using chemical reactions, Boundary Breaker is a chemically inert nano- to micro-sized particle that uses mechanical processes to generate its benefits. Ecopuro described it as “millions of rolling and tumbling mixing blades.”

“Boundary Breaker additive is a mechanical dispersing aid, therefore it is not limited by thermoplastic chemistry, which is extremely important in mixed recycled polymer processing,” according to a company write-up.

It is a powder that can be masterbatched or put into pellet form, said William Johnson, company co-owner. It can be used at concentrations of 0.25 percent to 5 percent of the total weight of the plastic and additives, depending on the application.

The Boundary Breaker additive yields various processing and end-product benefits, according to Ecopuro. It increases dispersion of dissimilar polymers in post-consumer plastic melt, chops up and spreads out other contaminants and improves the dispersion of additional additives. The end-products have smaller contaminants more evenly dispersed through a polymer matrix, allowing for improved product appearance and physical properties.

“When the influences of contaminants are reduced, it improves physical strength, which can allow some converters to increase the recycle content while maintaining product tolerance,” according to Ecopuro.

Scott Grant, Ecopuro’s engineering manager, told Plastics Recycling Update that by pushing contaminants down off the surface, Boundary Breaker reduces the number of instances of end users having to scrap molded parts because of visual surface imperfections.

Additionally, will reduce the cell size in plastic foams, which makes for stronger parts and allows manufacturers to use less plastic, he said.

Boundary Breaker converts static friction to kinetic friction, which reduces the energy required to move melt through equipment. By decreasing the resistance to flow – essentially serving the same role sand does on a shuffleboard table – Boundary Breaker can increase throughput by up to 30 percent during both extrusion and injection molding.

The material is safe for equipment, drinking water and food contact plastics, according to Ecopuro.

Rolling it out to recycling markets

First developed about seven years ago, Boundary Breaker has been used on a commercial basis for the last four years, Grant said. It has numerous applications in non-recycling-related manufacturing, although plastics reclaimers are now using it, too.

Ecopuro has partnered with additive companies for marketing and sales of Boundary Breaker to manufacturers. In addition to continuing that, it plans to begin licensing the technology to large recycling companies, Grant said.

It has U.S. and international patents pending for Boundary Breaker.