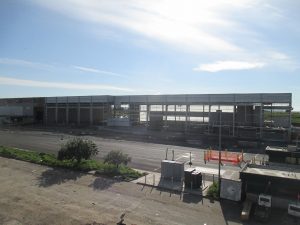 An operation in California estimated to cost more than $120 million will extract plastics and other recoverable material from municipal solid waste. But it’s not aimed at replacing curbside recycling collection.

While a number of recent mixed-waste proposals strived to allow residents to put recyclables, organics and trash together in one receptacle at the curb, the Waste Management operation is being framed as a last defense to recover materials that were not properly diverted by residents in local programs.

The organics materials recovery facility, or “O-MRF” as it’s being called, is being built at the 53-acre Davis Street Transfer Station in San Leandro, Calif., a city adjacent to Oakland, Calif.

Waste Management, operator of the Davis Street Transfer Station, plans to begin operating the new equipment early next year. Waste Management, a publicly traded firm that is the largest U.S. recycling processor, is also planning composting and digesting facilities at the site.

According to project documents, the 62,000-square-foot sortation facility will be able to process 100 tons of municipal solid waste (MSW) per hour and will handle all 150,000 tons per year of MSW generated by Oakland.

It is projected to extract about 60,000 tons of organics and 31,000 tons of recyclables per year, which equates to diverting 61 percent of the garbage stream from landfill. Alameda County documents described the processing line as a “complex system of screens and optical sorting.”

Waste Management spokeswoman Karen Stern told Plastics Recycling Update the facility is working its way through the permitting phase and noted the company believes the operation will be the first of its kind in the country.

Stern said the company estimates the first two phases of project – the O-MRF and the adjacent composting facility – will cost more than $120 million. That figure takes into account equipment, property, labor, permitting and engineering costs, Stern said. The project is expected to be rolled out in three separate phases.

Waste Management has applied to the California Alternative Energy and Advanced Transportation Financing Authority for the site, applying for a tax exemption on a portion of the project costs.

According to documents from state agency CalRecycle, the O-MRF is currently under construction and is anticipated to be fully operational by the first quarter of 2018.

When the O-MRF went before the WMA Board in February for inclusion in regional waste management planning, officials were careful to draw distinctions between the Davis Street facility and other garbage-sorting plants that have attracted the ire of recycling advocates who feel that the strategy reduces the value of recyclable materials.

“The difference between this organics MRF and a ‘dirty MRF’ is that a dirty MRF replaces source separation services,” Debra Kaufman, senior program manager with Alameda County, said at the meeting. “This facility is intended to augment source-separated organics programs with source separation continuing to be a focus for outreach.”

The project was spurred by a recent contract between Oakland, the county’s largest city, and Waste Management, Kaufman said. Oakland has robust recycling programs, with mandatory recycling and source separation requirements for multi-family and commercial properties. Standard single-stream recyclable materials are collected weekly by California Waste Solutions, and Waste Management handles weekly trash and compost collection. But the city’s contract with Waste Management, enacted in 2015, requires further processing of trash before it goes to landfill in order to meet high diversion goals.

California has pushed for aggressive diversion targets in recent years, goals which have been tied to larger climate change issues. Metropolitan areas have often responded by boosting their own local diversion targets.

“Oakland’s intent was to get the highest possible diversion rates, and they felt they couldn’t entirely rely on customer participation to yield those very high diversion rates,” Kaufman said.

She added that Oakland will not allow multi-family properties to claim the new facility fulfills their obligation to provide recycling and organics collection service to their residents.

“These facilities that we’re talking about today will separate and process organics that remain in the trash that are not source separated because they’re not placed in the proper organics bin by customers,” Kaufman reiterated.

Will residents relax their efforts?

Tackitt, a regional Waste Management director of operations, said he’s been working on the project since 2008, He noted that if the goal really was to replace source separation, the facility would have to be at least 10 times bigger, and it’s not economically practical.

Still, a board member asked what would happen when the word gets out about the O-MRF among the public, noting that it could lead some residents to slack off in their recycling separation diligence. Tackitt said Waste Management has not heavily publicized the project for that reason, explaining the company views the facility as a municipal tool.

“We’ve been very private about it,” he said.

Depending on other municipalities’ interest, the O-MRF may expand up to a capacity of 300,000 tons per year, according to project documents.

After separation, the recovered organics will be moved to the composting and digesting facilities adjacent to the O-MRF. Recovered recyclables, including plastics, glass and metals, will be sent offsite to be recycled, according to project documents.

The composting facilities are planned to have a 1,000-ton-per-day capacity, and a maximum annual throughput of 205,000 tons. They are slated to begin operating in late 2018, according to the county’s waste management plan.