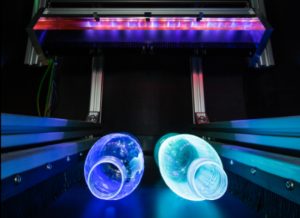 The aqua-colored PET bottle at right has been marked with a chemical marker, as part of the Polymark project.

Water bottles that glow under UV light might sound like just the latest rave fad, but the technology could actually hold the key to boosting recycled content in food packaging.

A European project called Polymark developed a marker for PET beverage containers that glows when exposed to ultraviolet light in a retrofitted optical sorter. The substance, approved for contact with food and drink, would later wash off during recycling.

Officials involved with the European Union-funded trial recently unveiled a trove of details from the three-year effort. The information was presented at a workshop and training event on March 15 in Brussels, and more than 80 experts from throughout the PET value chain attended.

The research was undertaken by a collection of industry groups and companies.

“We believe that sensor-based sorting technologies hold a key to enabling circular economy for plastics, providing high-grade sorting and boosting recycling quality and yield,” An Vossen of the European Association of Plastics Recycling and Recovery Organizations (EPRO) stated in a press release. “Aside from the technical progress made during the Polymark project, we have seen how the entire value chain has embraced marker-based sorting as a crucial next step in improving plastics recycling.”

Vossen was speaking on a video explaining and illustrating how the project works. It was played at the March 15 event, which was organized by trade groups Petcore Europe and the European Federation of Bottled Waters, both part of the consortium behind Polymark.

Today, a complicated process of accreditation is used to ensure these requirements are met, said Patrick Peuch, executive director of Petcore Europe. The three-year Polymark project aimed to provide an easy way to guarantee the regulations are being followed.

The project was partially funded by the European Union’s Seventh Framework Program, which provided 1.48 million euros (about $1.6 million), or two-thirds of the project budget. Project partners in fall 2015 released preliminary results of their research.

The project focused first on PET packaging, but the technology could be applied to other polymers.

Peter Reinig, group leader of photonic sensing at Fraunhofer IPMS, presented on the development of the chemical marker.

Approved for contact with food and drinks, the chemical marker can be used as a coating on the PET bottle itself or on a label, he said. The preference is as a coating after the blow molding, however.

After sorting, the marker is removed in standard washing systems. That’s important because a concern is that residual markings could, during later recovery cycles, wrongly identify a non-food-contact PET and send it into a bale to be used for food and drink packaging.

According to Reinig’s presentation, Polymark participants sought a chemical marker that could be detected with UV or near-infrared light, was safe to be near food, remains stable at high temperatures for PET compounding, could be easily removed, was commercially available in suitable quantities and didn’t affect the color or other properties of the packaging.

A search found two chemicals that fit the bill: thiophene (referred to as marker No. 12 in the project) and stilbene (referred to as marker No. 7). Both are UV absorbers that are safe for food and drink contact and can be applied via compounding or as a coating. Coated markers can be removed with existing recycling systems utilizing hot caustic washes. The two are also detectable using relatively inexpensive UV-excitation/VIS-fluorescence technologies.

Based on fluorescence testing, however, researchers said they preferred marker No. 7.

Reinig also presented on the development of spectral identification technology.

Laboratory testing showed that a simple camera system isn’t going to be sufficient to recognize the subtle fluorescence. As a result, researchers chose a Hamamatsu detector that’s highly sensitive and has a large pixel area, according to Reinig’s second presentation. The readout electronics and lighting components were from equipment company Sesotec. In all, the laboratory-scale setup cost about 6,600 euros (about $7,100).

Polymark developed the capability to sort marked PET bottles moving nearly 10 feet a second on a conveyor belt with a spatial resolution of 10 millimeters.

Through the lab trials, researchers also found that the marker coating should be 10 micrometers or greater in thickness.

The third presentation was from Hans Eder, head of research and development for Sesotec

According to Eder, after the lab-scale table-top detection system, Sesotec built a lab-scale sorter. It was a miniature version of an optical sorter complete with ejection system. The detection system’s light came from an array of LEDs emitting UV light, in addition to visible light LEDs used to detect the unmarked plastics. Mirrors focused the light into a line through which objects on the belt passed. The camera used in detection equipment was over 100 times more sensitive than a standard camera, and was capable of 2,000 scans per second, he said.

Sesotec then transferred the technology to a full-scale optical sorter working on a demonstration line. The sorter included a meter-wide conveyor belt moving at nearly 10 feet per second. It carried two metric tons of material per hour.

The system achieved an output purity of 98 percent on the major input fraction. That’s an average across multiple trials. The purity dropped down to as low as 94 percent when bottles were only partly coated and when the input material was very diverse.

Sesotec noted that the industrial-scale detection was modular, so it could be integrated into existing optical sorters. The company issued a press release discussing its role in developing sorting equipment for the Polymark project.

Casper van den Dungen, vice president of PRE, said at the March meeting the Polymark project provides a platform for the industry to communicate tracer technologies to a broader audience, but barriers remain to the widespread adoption of the approach.

“However, Polymark marks a starting point and gives a certainty that such innovation is possible,” he said.