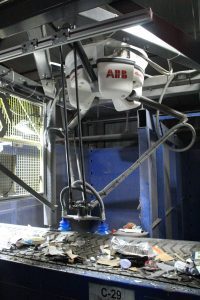 Using an advanced visioning system and deep-learning capabilities, a robot is now picking an average of one carton per second off a container line at a Denver-area materials recovery facility. It may be an early look at the future of plastics sorting.

The project, unveiled on March 16, is a major step forward into the world of using artificially intelligent robots to sort municipal recyclable materials.

For the past year, AMP Robotics has been testing and optimizing its robotic systems at Alpine Waste & Recycling’s Altogether MRF near Denver. The Carton Council of North America, an industry stewardship group, provided a grant to purchase AMP’s robot for the MRF.

Clarke aims to fill a niche in single-stream MRFs: replacing humans with a machine that doesn’t get tired or injured while still yielding the higher volumes handled by expensive optical sorters. The goal is to eventually extend the technology beyond cartons.

“Everything Clarke has learned about identifying cartons can be transferred to robots at other MRFs,” Jason Pelz, vice president of recycling projects for the Carton Council and an executive at Tetra Pak, stated in a press release. “We … believe this technology has widespread implications for the recycling industry, as it can be adapted to other materials.’”

Those other materials include various plastics, including some difficult-to-sort ones. AMP Robotics founder Matanya Horowitz recently spoke at the Association of Plastic Recyclers (APR) Technical Forum, held in conjunction with Plastics Recycling 2017 in New Orleans. At the event, his said his company has focused on sorting PET, natural HDPE and colored HDPE. It is also beginning to work with PP, mixed plastics coded Nos. 3-7, electronic scrap, black plastics, thin films and single-serve coffee pods.

At the Altogether MRF, Clarke is located on the container line after the optical sorter has removed PET. The system is currently hitting an average of 60 picks per minute. To compare, humans are capable of 80 picks per minute for short periods, but they quickly tire and slow down, bringing their sustained average down to closer to 40 picks per minute, Horowitz said.

The machinery takes about 12 hours to install and is bolted onto a standard conveyor belt. Clarke utilizes two suction cups, so it can make two picks for each cycle, depending on the location of material on the belt. It has a reach of 63 inches and a payload capacity of 13 pounds.

But what’s novel about Clarke isn’t necessarily that it employs a robotic arm to pull items off the belt. Denver-based AMP Robotics, in fact, is using an off-the-shelf robot that has been in use for two decades in other industries.

Its major advance is in the area of visioning systems and software. That was a key message Horowitz recently delivered while speaking at the APR Technical Forum. Clarke utilizes advances in “deep learning” that first emerged in 2012 and allowed robots to understand the environment around them, he told the audience. Other examples of these software capabilities are present in self-driving cars and Facebook’s ability to recognize faces in photos. 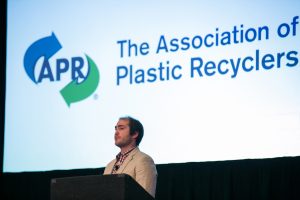 Unlike a near-infrared sorter, for example, AMP Robotics’ system uses lower-cost visible-light cameras to feed images to a computer. The computer uses advanced machine learning algorithms to recognize items on a belt. It has the ability to not only calculate the number of different types of packaging coming down a belt but identify the brands and estimate the weights. The more the system “sees,” the better it gets at identifying objects. And its knowledge can be uploaded to every other AMP Robotics unit that’s been deployed, allowing robots to learn from each other.

Leveraging those capabilities, AMP Robotics is also rolling out the “eyes” and “brains” of the system without the mechanical arm attached. That product, called the AMP Neuron, could study a pre-sort line to examine incoming stream composition or reside on the residue line to quantify recyclable materials that are being lost to landfill, as examples.

“If you want to know on a second-by-second basis how much material is going down your container line, we can tell you,” Horowitz told Resource Recycling. “Basically [we can] do a continuous waste characterization with this system.”

Since its founding, AMP Robotics received financial support from both the private and public sectors.

In January 2015, the National Science Foundation (NSF) provided Horowitz’s company a $150,000 grant. That spring, the state of Colorado also gave AMP Robotics a $98,000 grant. That fall, AMP earned first place in the Recycling Innovators Forum, held in conjunction with the Resource Recycling Conference, winning a $20,000 prize. Then, in spring 2016, it received a $739,000 grant from the NSF, the second phase of support from the federal agency.

“People are willing to make a bet on these programming kids that think they know how to do this stuff,” he said.

He foresees a lowering of the costs of recycling. At the recent APR meeting, Horowitz said AMP expects to cut sorting costs by 50 percent to 65 percent, with a 12-to-18-month-payback period for the system.

From lab to MRF

Early in 2016, after demonstrating the system’s capabilities in the lab, AMP introduced its robotics technology to the Altogether MRF. Built in 2007, the facility saw a significant equipment upgrades in 2011 and 2015.

When Resource Recycling published an in-depth article on robotics in its June 2016 print edition, Horowitz said his company had begun testing a robot on a container line at a U.S. MRF.

Recently, Horowitz said he and his staff had been testing different types of robotic systems at the MRF through last summer. They encountered unanticipated headaches bringing the robot out of the lab and into a working facility. Among them: problems caused by dust and vibrations. In 2016, they worked to overcome those and other challenges, including the wider-than-expected variety of cartons tossed into Denver’s recycling carts.

What became obvious to Horowitz early on was that as crucial as overcoming technical issues was, having a patient partner such as Alpine Waste & Recycling was more important, he said.

In the end, they determined the Delta-style robot with a vacuum system was their best option for targeting cartons in a MRF. They have high-speed, lightweight arms and sealed electronic components. If VHS tape wraps around the arms and damages them, for example, they can be easily replaced in about five minutes without tools, Horowitz said. The Delta was installed in early December.

“The tremendous speed of these robots combined with their reliability, it ends up a perfect fit,” Horowitz said.

The robot was made by international company ABB Robotics, which calls that model the “Flexpicker.”

The Carton Council said it would like to deploy additional AMP Cortex units to other facilities to target cartons. The receptive response from the recycling industry so far could mean a relatively fast roll-out of units.

“People have been waiting for robotics for a long time,” Horowitz said. “It’s not, ‘Why would I do that?’ It’s more, ‘Gee, why is this taking so long? It’s very clear what the benefits are. I don’t understand why they have this for manufacturing and not for recycling.’”