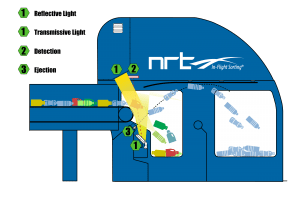 By examining both transmissive and reflective light from objects, the ColorPlus-R optical sorter is able to identify the color of opaque objects, including black plastics.

The new offering from National Recovery Technologies (NRT) builds on technologies already offered in the ColorPlus. As with the earlier ColorPlus models, the ColorPlus-R also places material coming off the belt between the light source and the detection camera. Its advanced image processing system is able to detect materials based on color and object recognition. NRT’s In-Flight Sorting technology then fires an air jet at targeted objects while they are in mid-air, separating them from the rest of the stream.

But new to the ColorPlus-R is a second LED light source adjacent to the detection camera. That allows the camera to study the light reflecting off the object. Without the reflected light, opaque materials are only recognized as objects of indeterminate color.

“The real advantage to the ColorPlus-R is the ability now to recognize the color of an opaque object with extreme confidence and in a fraction of a second,” Matthias Erdmannsdoerfer, NRT president, stated in a press release. “For example, black plastics pose a problem to our customers, particularly in plastic recycling facilities where accuracy is ultimately defined by the parts per million. Black plastics absorb too much light for near infrared detection by polymer type, so with this new equipment we can effectively remove this type of contamination. Our team should be proud of yet another accomplishment that will pay dividends to our customers.”

In addition to removing black plastics from a stream, the optical sortation technology could be used to separate white containers from other colored opaque plastics.

The sorter will be installed at a materials recovery facility (MRF) owned by European water and waste management giant Suez. The MRF, located near Aberdeen, Scotland, is being designed, engineered, manufactured and installed by Bulk Handling Systems (NRT is a Bulk Handling Systems company). It is expected to open during the second quarter of this year. In that single-stream system, the ColorPlus-R will be removing cardboard from a mixed paper stream.