The Sustainable Packaging Coalition’s recently published Centralized Study on the Availability of Recycling found that a substantial majority of Americans have recycling programs available to them that accept all PET packaging. Included in this designation were bottles and jugs but also non-bottle PET packages – the clamshells, cups, tubs, lids, boxes, trays, egg cartons and similar rigid, non-bottle packaging made of PET (No.1) plastic resin that are increasingly common on retailer shelves.

“We were very pleased to see that most Americans can put PET thermoforms in their recycling bins according to the guidelines provided to them by their communities, but we know that this doesn’t tell the whole story of what happens to those containers,” said Michael Westerfield, corporate director of recycling programs for Dart Container Corporation in Mason, Mich. and a National Association for PET Container Resources (NAPCOR) board member.

As use of PET thermoform packaging continues to grow, the industry is being forced to confront an important question: How do we look beyond collection to determine whether a material placed in a recycling bin actually makes it to market?

NAPCOR set out to find an answer in the spring of 2016, seeing it as a good time to benchmark progress toward the group’s ongoing efforts to open markets to PET thermoform materials. NAPCOR also saw the research as an opportunity to assess whether PET thermoforms meet Federal Trade Commission (FTC) requirements for recyclability claims. 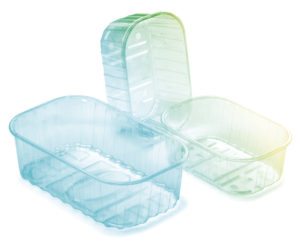 The methodology was straightforward: ask questions about thermoform recycling realities to those who handle the PET material along the way, from bin through to reclaimer. To that end, NAPCOR surveyed the major operators of materials recovery facilities (MRFs) and plastics recovery facilities (PRFs), as well as PET reclaimers, to determine how they handle the PET thermoforms that flow through their systems.

We found that, for the most part, PET thermoforms collected at curbside are being sent to PET markets in bottle bales, and most reclaimers who handle curbside materials generally recycle them along with PET bottles.

“We have worked closely with PET reclaimers to analyze the impacts of thermoforms on the recycling stream and wanted to do our due diligence with the other parts of the value chain to ensure real recyclability before we put messages into the marketplace,” Westerfield noted. He and the NAPCOR leadership recommend that other resins and materials work to the same standard as they assess recyclability.

Do PET thermoforms meet the FTC’s Green Guide’s requirements for unqualified claims of recyclability? The answer is pretty clearly yes. Recycling programs that include this material are available to more than 60 percent of the U.S. population, and once collected, PET thermoforms can be separated and recovered through the existing PET recovery infrastructure.

So, they are recyclable. But they are not yet a preferred material for reclaimers, and the reasons why are multifaceted.

Initial work included lab trials aimed at determining whether PET thermoforms would be compatible with the bottle stream, and what technical or practical issues would need to be mitigated. Through these early-stage initiatives, NAPCOR and its partners identified the following key issues that could inhibit the growth of PET thermoform recycling: look-alike packages; labels/adhesives/inks; intrinsic viscosity (IV); and mechanical issues related to package size, shape and configuration.

At the end of the day, these early trials found no overwhelming issues that precluded PET thermoforms from being recycled and processed. Nonetheless, the incorporation of PET thermoforms in the bottle recycling infrastructure has not been seamless, and further study and analysis was identified as a critical step to maximizing recovery of this growing package in a manner that does not harm the existing bottle recycling infrastructure. 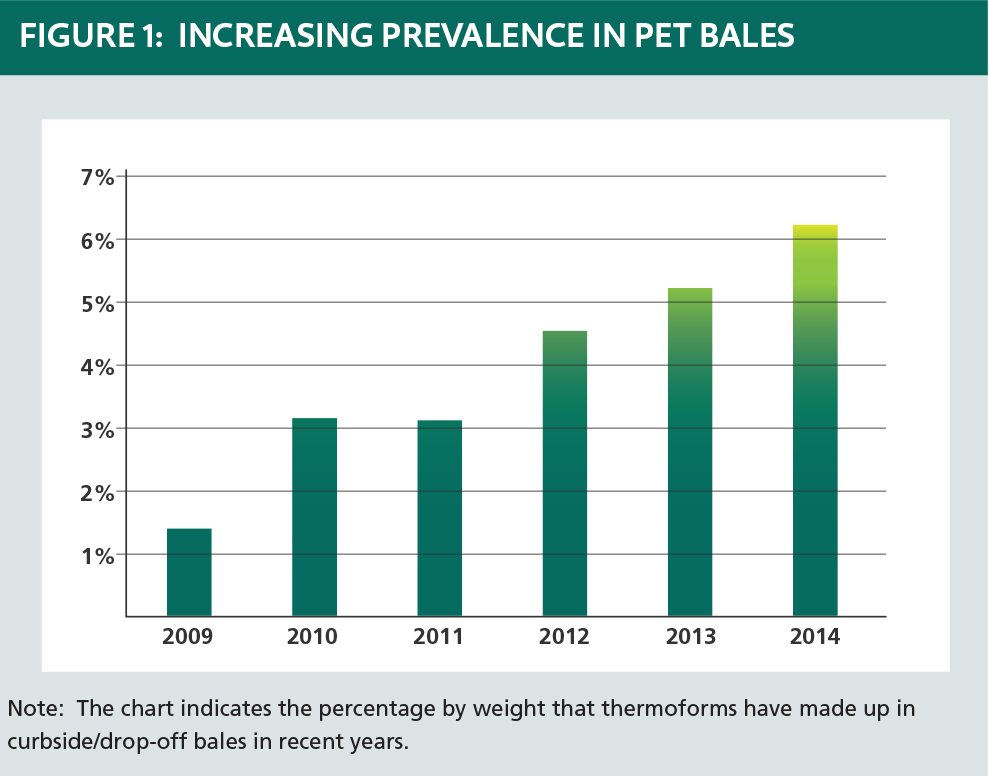 “Through NAPCOR’s early work, we knew that PET thermoforms could be effectively collected, sorted and marketed,” said Dan Kuehn, general counsel for Cross Plains, Wisc.-based thermoform manufacturer Plastic Ingenuity and chair of NAPCOR’s Thermoform Committee. “Even though reclaimers were becoming more comfortable with buying PET bottle bales that contain some PET thermoforms, there were clearly key questions that were holding back the broad acceptance of PET thermoforms in the recycling stream, so we set out to answer those.”

Using trials to delve in deeper

Guided by a committee including both thermoformer and reclaimer members, NAPCOR identified five technical trials as critical to building the information base that would help open the rPET market more broadly to PET thermoforms. Those trials included: 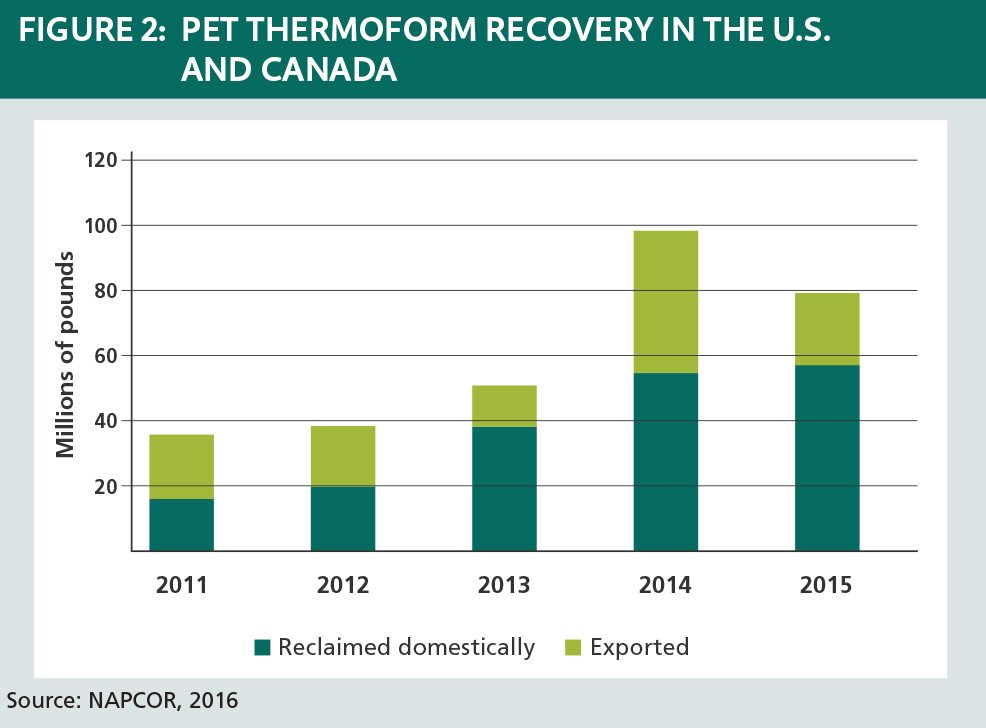 The growing prevalence of PET thermoforms in curbside PET bottle bales is unmistakable (see Figure 1). As such, reclaimers have had to adapt to a stream containing these materials. But the reclaiming industry is already struggling with the larger issues of increased contamination and yield loss, meaning the thermoform adjustment comes at a difficult time.

Along with increasing numbers of thermoforms in the stream, reclaimers are faced with the impact of lighter weight containers, full-wrap shrink labels, metal components and other design elements that impede recyclability and negatively affect PET yield. At the same time, they are facing tight operating margins that result from competition with extremely low virgin materials prices. The result: Reclaimers need to buy more bales to produce the same amount of salable rPET flake, and they often sell that flake for less. It doesn’t take an MBA to see that this is a tough business.

“It feels a bit like death by a thousand cuts,” explained Byron Geiger, president of Athens, Ala.-based Custom Polymers PET and a member of the NAPCOR board of directors. “There are a lot of packages coming through our facilities that add costs to the system, and thermoforms are among them. We need to understand how they impact our operations, and we need to be sure they don’t bring along more contaminants.”

Yet, despite concerns about contamination and yield, reclaimers need more PET material. Even in today’s difficult economic conditions, there is still far more capacity to recycle PET than there are bottles collected in the U.S. Reclaimers routinely supplement domestic supply with imported bales and other non-bottle materials. PET thermoforms offer the potential to increase domestic supply.

The drive to develop new sources of supply keeps reclaimers engaged in working through their issues with thermoforms. And they are making progress. Reclaimers generally fall into three categories with regard to thermoforms. The first group routinely accepts a certain percentage of thermoforms, as identified in their specifications. The second does not officially acknowledge acceptance of thermoforms in their specs, but does accept them from suppliers that have a good track record with regard to contamination. The third group is made up of reclaimers that do not accept thermoforms at all. Most of the reclaimers in this last category typically rely on materials collected through deposit programs.

Reluctance toward acceptance may be on the decline, however. “As we have learned more about thermoforms through the NAPCOR trials, we’ve become more comfortable with running them in our system,” Geiger said.

However, the allowable percentages of thermoforms for some reclaimers is still quite low and MRF operators remain hesitant to open the floodgates and invite all of their suppliers to include PET thermoforms in the stream.

Where do we go from here?

“We have made serious progress toward the goal of making recycling of PET thermoform packages as easy as recycling bottles,” said Kuehn of Plastic Ingenuity, “but we are not quite there yet.”

Important work remains to ensure that MRFs and the PET reclaiming industry can effectively sort, process and reap value from this growing material stream. NAPCOR will continue its efforts to work through the design issues as well as technical and mechanical challenges to increase acceptance of PET thermoforms in domestic recycling programs and markets. At the same time, we need to ensure consistent and accurate messages to the marketplace about the status of PET thermoform recycling.

And packaging and consumer product companies can help in this process by incorporating APR design for recyclability principles when setting specifications and selecting labels for their PET thermoform products.

Resa Dimino is the former director of public policy at the National Association for PET Container Resources (NAPCOR). She is now a staffer at consultancy RRS.