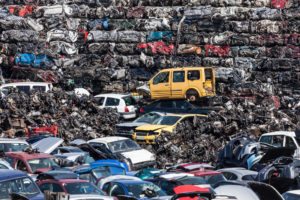 Despite deep uncertainties in the global oil market, a firm in Indiana says it intends to invest hundreds of millions of dollars in an operation to convert auto shredder residue into diesel and gasoline. It also plans to run a more traditional recycling operation.

GEP Fuel & Energy Indiana announced in late November it would build a large-scale recycling and refining operation in Camden, Ind. that could cost anywhere from $300 million to $410 million.

Troy Flowers, GEP’s chief operation officer, told Plastics Recycling Update the operation will handle about 1 million tons of plastic annually. Roughly 80 percent of that total will come from automotive shredder residue (ASR) and be converted into fuel. The remaining 20 percent will consist of mixed plastics that will be recycled.

“Our goal is to find a use for 100 percent of everything brought in,” Flowers said.

GEP is not the only company in Indiana hoping to profitably convert plastics into fuels. RES Polyflow announced late last year its plans for a $90 million plant in Ashley, Ind., a small town about 120 miles northeast of Camden.

While crude oil prices have rebounded from their historic lows of below $30 a barrel in February, current oil pricing, at about $50 per barrel, continues to put pressure on the plastics-to-fuel sector and other businesses trying to compete with traditional oil production.

A recent report from auditing and consulting firm Deloitte estimated that nearly a third of oil producers globally were in danger of bankruptcy.

“The business model allows for flexibility within the recycling market,” GEP’s Flowers said. “We can produce fuels as well as provide sorted and processed feedstock to other industries for resale.”

The company is aiming to eventually employ up to 245 workers, and said it chose Camden in part due to its close proximity to sources of material.