From A to Z, the latest recycling tech on display at K 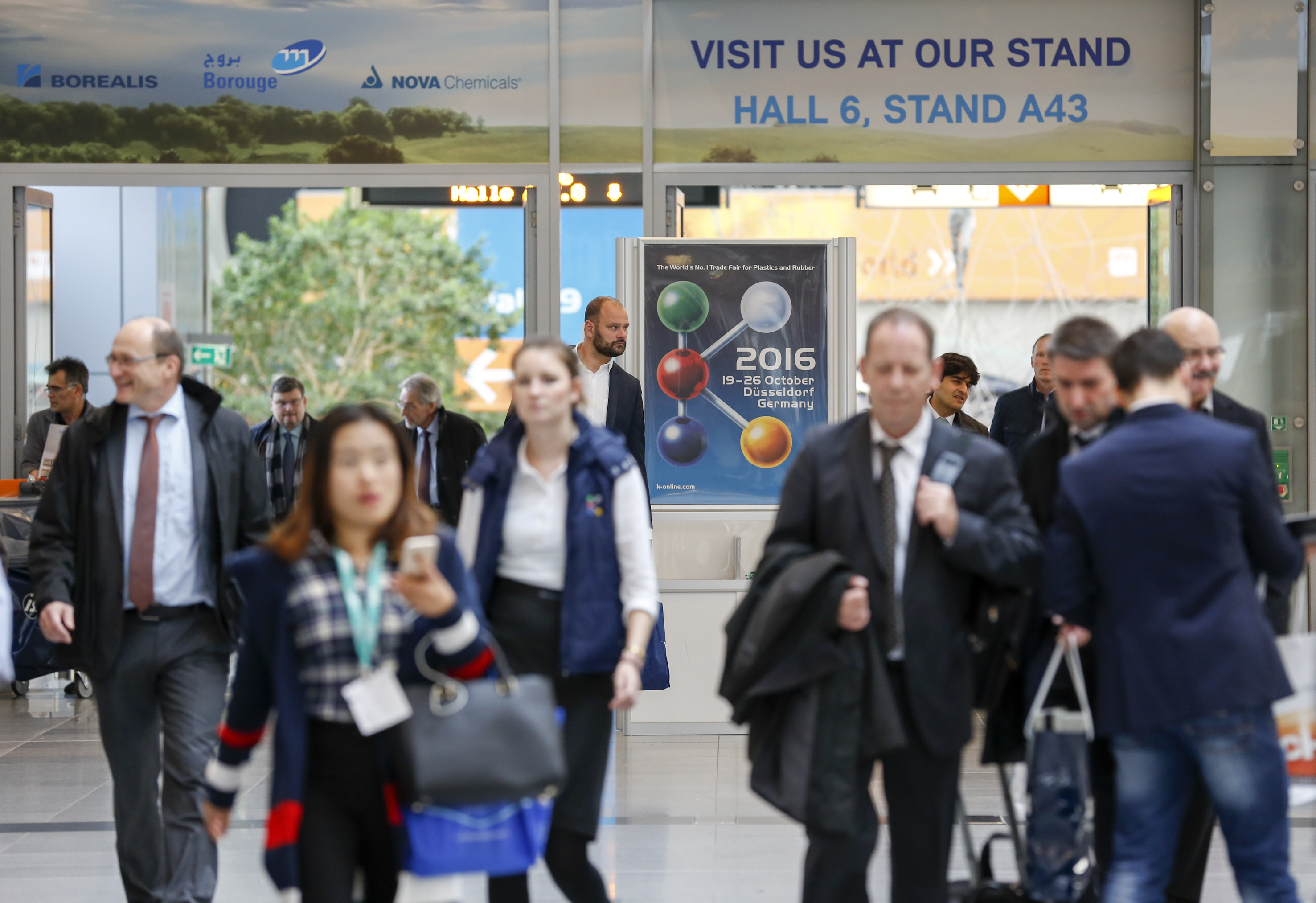 Following are details on some of the plastics recycling equipment innovations that were on display at K 2016, which was held Oct. 19-26 in Düsseldorf, Germany:

Unisensor unveiled what it calls the Powersort 360, which is capable of sorting up to 10 tons per hour of various-colored plastics, including black ones.

Targeted at processing shredder fractions with a high percentage of black plastics, including those from electronics, electrical appliances and vehicles, the Powersort 360 can separate material into fractions of ABS, PS, PC-ABS, PP and more. Or it can remove unwanted plastics, such as PVC, wood, rubber, glass, rocks or metal contaminants from streams.

Capable of sorting items between 15 millimeters and 75 millimeters, the equipment is an advancement on the Powersort 200 system. It uses laser spectroscopy to analyze material.

“The black materials do not need to be separated from the colored materials and the material stream does not need to be presorted in any other way,” according to a press release. “Upstream regrinding of material is also eliminated.”

Here is how Unisensor describes the laser spectroscopy technology:

“The system uses a powerful laser light to excite the molecules in the plastic parts. Then, the light spectrum that the individual parts are emitting is analyzed. Each material has a specific spectrum, i.e. a specific physical fingerprint, which acts as a unique identifier. The optical design with a powerful laser light source and an extremely high signal processing speed ensure that one million spectra can be generated and evaluated every second.”

The equipment incorporates eight sorters arranged in a circle around the laser and sensor equipment. The eight segments, together, create an effective material scanning width of four meters. They can be programmed to do up to eight different sorting tasks or all do the same task to boost throughput to 10 tons per hour.

Bühler Group displayed two of its sortation machines for PET sorting, the Sortex A ColorVision and Sortex E PolyVision. The company calls it a two-machine solution for PET bottle-to-bottle recycling.

The Sortex A ColorVision uses three visible wavelengths as it sorts flakes by color. When combined with enhanced InGaAs camera technology, an advanced inspection system and SmartEject technology, the sorter effectively removes contaminants from clear, blue, green and jazz applications, according to a Bühler Group press release.

Then, the Sortex E PolyVision takes over, sorting flakes by polymer. The equipment simultaneously uses a combination of transparent and reflective sorting, allowing it to separate clear contaminants from clear PET.

OEM and PET reclaimer STF Recycling, which processes 130,000 metric tons of PET bottles each year, installed the two devices. They boosted the yield of bottle-to-bottle flakes by 30 percent, according to Bühler Group.

Josef Söllner, managing director of STF Recycling, applauded the equipment’s ability to remove contaminants, including opaque defects, wood, metals and other polymers. One of the biggest challenges faced by STF Recycling is a constantly changing infeed stream that includes more metals from beverage cans and bottles with multiple layers, sleeves and labels made of PVC, PS, PC and PET-G.

Specifically designed for post-consumer plastic scrap, the Micromat WS directs a jet of water onto the rotor to help remove contamination before the plastic ever reaches the washing line. The water also ensures uniform and controlled material discharge, according to a Lindner press release.

The Micromat WS has six to eight integrated nozzles that spray between 528 gallons per hour and 7,925 gallons per hour of water onto the rotor. The amount of water can be adjusted, depending on contamination levels. The WS series feature a fully watertight design, with rotor seals that isolate the cutting chamber from the outside.

Like all models in the Micromat series, the WS model has an adjustable slip clutch to minimize the risk of damage from foreign materials.

Once the plastic passes through the pre-shredder, screw conveyors move it to the new Lindner Rafter pre-washer (see “wash line” section below for more details on that equipment). The conveyors ensure the plastic remains in contact with water the whole time.

The German company unveiled its Rafter washing system, which has a throughput of 3,300 pounds per hour to 5,500 pounds per hour. The system sends shredded containers or film through three phases:

First, a conveyor screw pulls the material under water so heavy contamination, including metals, stones or glass, sink in a calm step. Second, stubborn particles sticking to the plastic are removed by a paddled rotor operating in a stationary drum. The rotational speed of the rotor can be adjusted based on the level of contamination. Lastly, after the washing cycle, plastic rises to the surface, where it’s conveyed via a feed screw to other processing steps. The contaminants are removed from the system by an optional chain-type scraper conveyor.

The Rafter has a frequency converter allowing users to adjust its throughput, so that it can match the pace of equipment before and after it in a plastics-recycling line. The system also has an energy-optimized drive system and a water demand of 792 gallons to 2,642 gallons per hour.

“By integrating the Rafter into a recycling line to pre-wash the plastic waste, operators gain an effective and also economical method of reducing wear in downstream reconditioning equipment and hence, boosting the line’s cost efficiency as a whole,” Harald Hoffmann, managing director at Lindner washTech, stated in a press release.

The Continuous Filter Operation (CFO) has been better designed and built, and it is more easily maintained than any melt filter of its kind, according to a company press release.

The melt leaves the extruder and goes through an opening that’s designed to spread the flow out across the entire screen at lower pressures. It then passes through a stainless steel screen. When contamination results in back pressure reaching a preset level, a rotating blade sweeps it off and removes it via a discharge port. The blade can also be manually activated.

The new CFO melt filter has an oversized drive and gearbox, giving it the power to handle the toughest applications. The beefy filter housing and bolt pattern prevents leakage, even at high pressures.

The filter is a rotating screen combined with a continuous scraping system. Contamination is discharged through an auger.

The filter system’s improvements include a pneumatic scraper, which allows for more adjustability so operators can ensure the stable performance of the system, according to MAS.

The other sizes use a 510-millimeter filter disc. The CDF 500 has one disc, the CDF-500-D has two parallel discs (boosting throughput) and the CDF-500-D-P consists of two parallel CDF-500-D units with a total of four filter discs. That model can filter up to 8,800 pounds per hour, making it “one of the highest-performing units of its size on the market,” according to MAS.

MAS also unveiled improvements in its extrusion technology, including both commercial-scale and lab-scale machines.

For the lab, the company showed off the MAS 24, a conical, co-rotating, twin-screw lab extruder used for developing new formulas and producing them in very small volumes. The equipment has a screw length of just 400 millimeter and a diameter of 48 millimeters, narrowing down to 24 millimeters. The maximum output ranges from 22 pounds per hour up to 77 pounds per hour. Equipped with interchangeable mixing elements, the MAS 24 Lab Extruder allows for full control over shear strength by varying the screw speed from zero to 300 rotations per minute.

MAS also unveiled its third-generation conical, co-rotating, twin-screw extruder, described as the “bread and butter of the MAS organization.” The new series features an optimized machine design, including a segmented barrel construction. That allows an operator to exchange individual barrel sections, as opposed to having to replace the entire cylinder. The extruders are available in different sizes with outputs ranging from 22 pounds per hour up to 4,400 pounds per hour. MAS displayed the MAS 75 model, suitable for up to 2,425 pounds per hour.

Starlinger & Co. demonstrated the effectiveness of its odor-reducing technology, which starts with the company’s SMART feeder to prepare recycled plastics. In the feeder, plastic is heated and homogenised until the ideal operation point is reached. Then, it goes into a C-VAC degassing module, followed by a Smell Extraction Unit.

The company set up a “smelling table” where people could smell four samples of plastics before and after the odor-reduction process.

“Odor is a burning issue for a lot of plastic recyclers,” Paul Niedl, head of sales for Starlinger recycling technology, stated in a press release. “Many visitors who came to our booth specifically wanted information on our odor-reduction process because they have to deal with this problem and had heard about our solution in the runup to the exhibition.”

The first line equipped with the technology has been sold and will be installed and commissioned soon.

The system is capable of recycling PET flakes into sheets with tight tolerances. It consists of a shredder, feeder and extruder combination for producing melt, a P:REACT unit for decontaminating and boosting intrinsic viscosity (IV) and a sheet production system from KUHNE.

The P:REACT decontaminated the melt to a level allowing for its use in food-contact packaging, per U.S. Food and Drug Administration regulations, according to a press release. It also sets the IV value to the desired level.

“This means all the material requirements are on hand for producing PET sheets that have tight IV tolerances on par with virgin material,” Josef Hochreiter, CEO of NGR, stated in the release.

“The newly provided option for producing high-quality PET sheets from low-cost input materials, and eliminating one melt step in the process, have already ignited great interest among our customers,” he said.

Polystar showcased its redesigned Repro-Flex, equipment that combines cutting, extrusion and pelletizing in one unit.

Designed for the recycling of PE and PP flexible packaging (both printed and unprinted), the Repro-Flex has been redesigned to implement what it has dubbed a “Simple in design, Flexible in operation” concept. The company determined that other systems are too reliant on computers, and when the software fails, the machines cease to operate. So it developed dual auto and manual control systems.

The Repro-Flex’s cutter compactor prepares material and feeds it into the extruder with a centrifugal force.

“Compared to conventional recycling machines, this integrated system does not require a separate crusher, and therefore, eliminates the problem of inconsistent feeding,” according to a press release.

Erema Group unveiled what it calls its Careformance Recycling Center, which it demonstrated live in a 5,160-square-foot space at the show.

The pop-up facility used Erema’s Intarema TVEplus 1108 system with an integrated Laserfilter to recycle roughly 30 metric tons of plastics generated at the trade show, according to a press release. The quality and process data from the recycling was relayed in real time to the company’s booth.

Multiple companies – Borealis, Hosokawa Alpine, Bobst, GEA and Erema – worked together to produce and recycle all-PE stand-up pouches live at the show. The pouches were produced on site, recycled and the recycled content was sent through an OCS extruder to make blown film. Additionally, the recycled content from the pouches was produced before the show to make carrier bags to give away.

“I like to compare the plastic loop to a relay race,” Manfred Hackl, CEO of Erema, stated in a press release. “It is not enough if a part of the value chain thinks only in terms of their processing step. Every manufacturer or processor of plastics has to think one step further to reach the finish line successfully together.”