This story originally appeared in the May 2016 issue of Plastics Recycling Update. 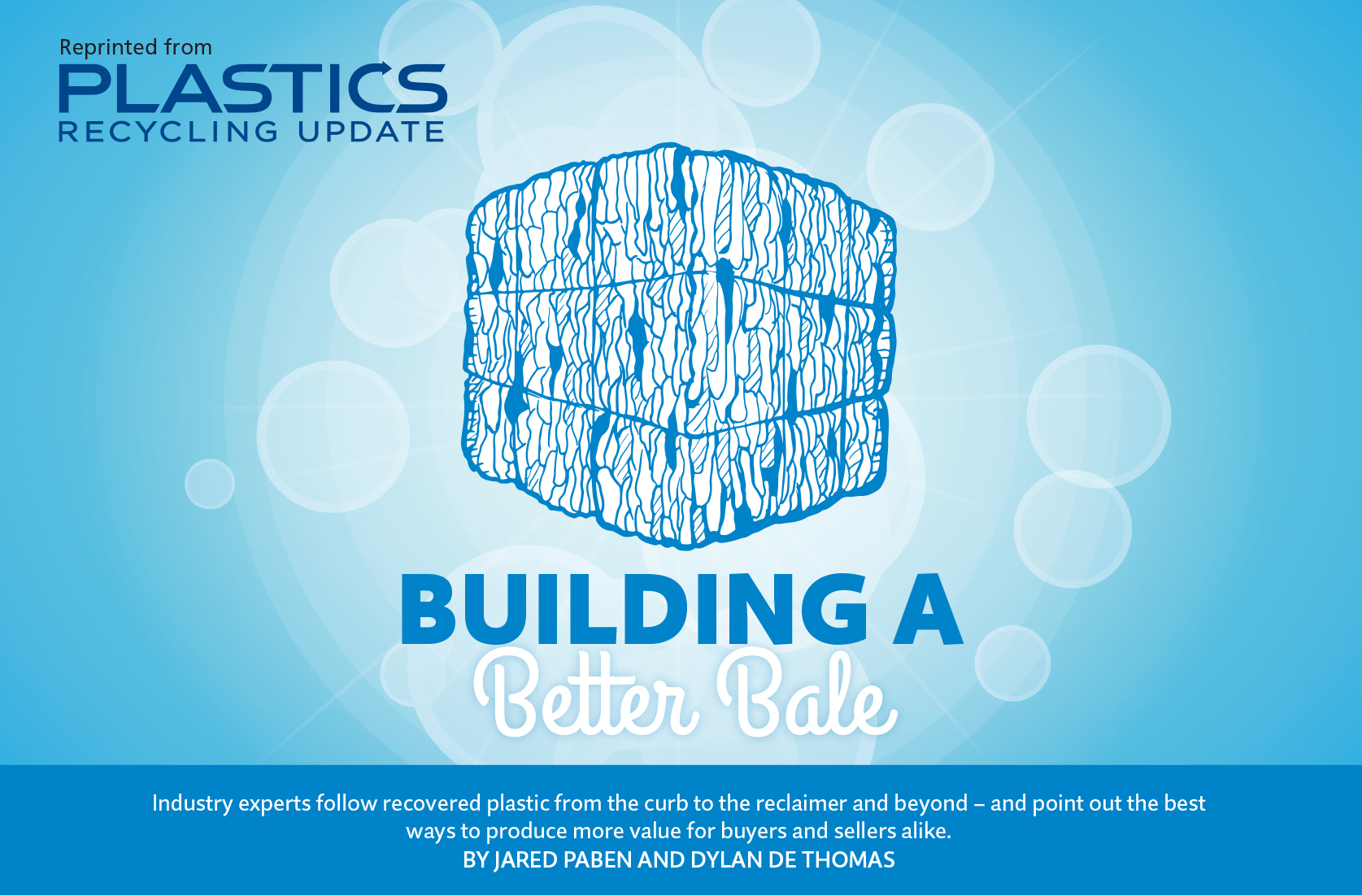 Addressing over 200 plastics recycling professionals recently, John Standish emphasized the importance of viewing bales of recovered plastics as feedstock for a manufacturing operation, not simply discards to be diverted from landfill.

“In any modern, high-volume, automated process, the quality of the raw materials is very important to the success of the process,” said Standish, the technical director of the Association of Plastic Recyclers (APR). “And in plastics recycling, the raw materials are bales of plastic bottles and other plastic articles.”

To help push forward the quality of the bales so central to the viability of plastics recycling, Standish and APR gathered industry experts from across the material stream to share their insights at the group’s first-ever Technical Forum, held at Plastics Recycling 2016 in New Orleans earlier this year. The lineup of speakers included equipment representatives, a program design professional and a top PET reclaimer.

These leaders helped explain why boosting bale quality across the industry will take a coordinated effort among all stakeholders. They also detailed concrete steps that can be taken at different points in the recycling chain to produce feedstock that will induce end users to offer higher prices instead of bale-rejection notices.

‘Communicate at the curb’

“We want to make sure that the equipment and the MRF operator don’t have to work so hard,” Marshall said.

Around the country, about 15 to 18 percent of what trucks tip at material recovery facilities (MRFs) is contamination, Marshall said, and the causes are many: confusing, overly detailed acceptable/unacceptable lists; MRF-municipality contracts that fail to hold governments accountable for contaminated loads; and a confusing patchwork of hauling companies, MRF operators and container types.

“Education isn’t going to solve and clean up the stream, and operations certainly isn’t going to do it on its own either,” he said. “Where those two meet is where you find success and get good quality material.”

He advocates for using simple communications, perhaps choosing the top five contaminants for a list of prohibited materials, noting that “you only have about seven seconds to really capture your residents’ attentions on what to recycle and what not to recycle.” Local governments should also be communicating regularly with MRFs about contamination and acceptable materials, rather than every few years or when a contract is expiring. And, unlike in many other businesses, refusing to serve a recycling customer may actually be the best move.

Springfield, Mass., for example, was getting charged by a MRF for its 24 percent contamination rate, Marshall said. The City began measuring the problem, tagging bins and leaving notes behind. Within a year, the rate was down to 10 percent. The number of tagged carts per day dropped from 68 to 10. 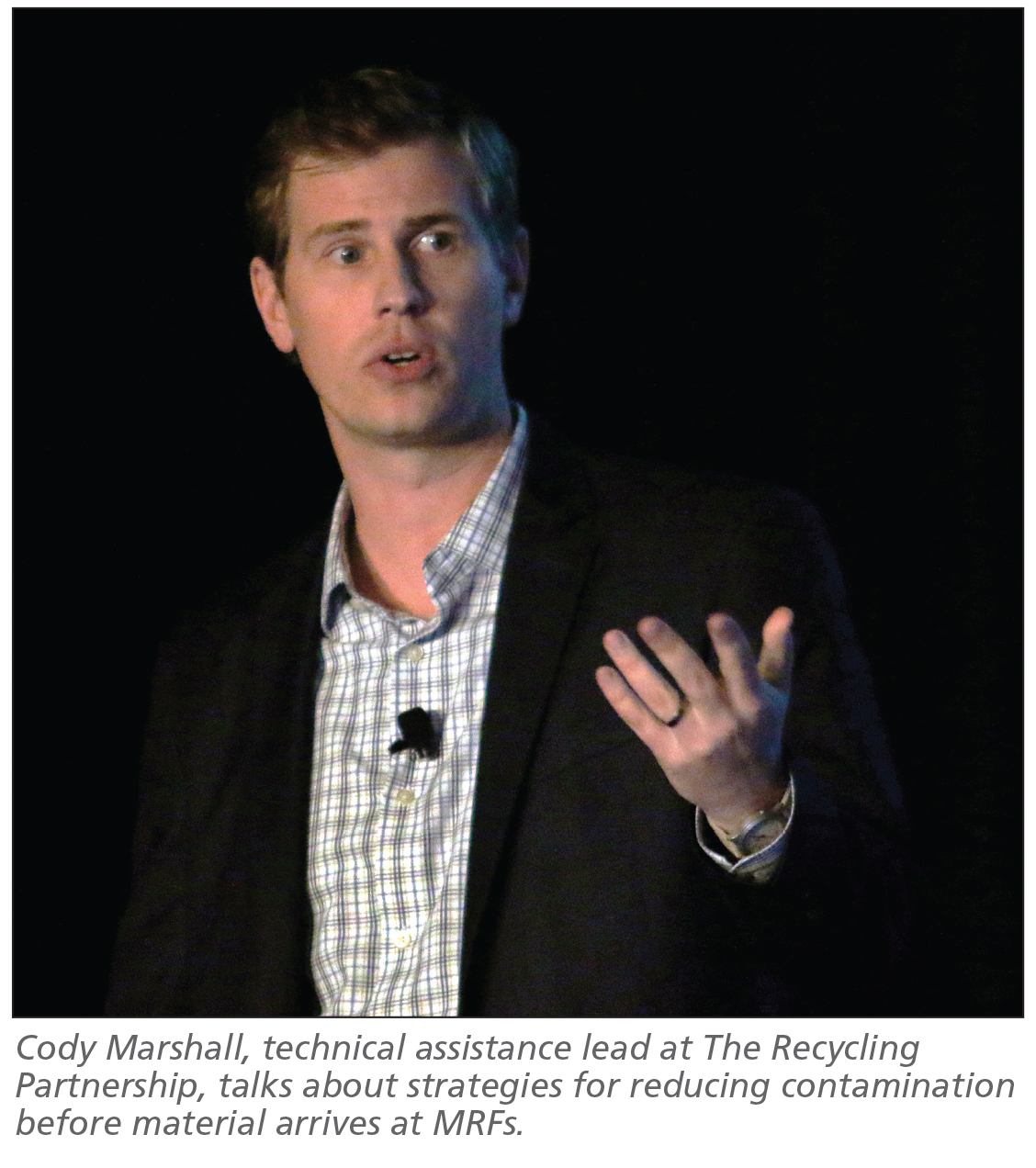 MRF operators also can take steps to ensure their systems are ready to remove contaminants before they land in the baler.

A proper sortation line design starts at the materials source, regardless of whether the stream originates at single-family houses, multi-family buildings or stores and factories, said Matthias Erdmannsdoerfer, president of Nashville, Tenn.-based National Recovery Technologies (NRT), a Bulk Handling Systems company. The source influences the design and performance of MRFs.

The most important action isn’t procuring technologically advanced or perfectly suited equipment, he said. It’s ensuring all the pieces work together.

For example, while he stressed the importance of optical sorters in modern MRFs, he also said the technology uses air jets to separate material. That means there’s a chance of “collateral ejections,” or air jets blowing out material, including contamination, adjacent to the desired plastic containers.

That brings us to the tool that is often cited as the most critical piece of the bale-quality process: the optical sortation device.

Felix Hottenstein, sales director for MSS Optical Sorters, a division of the CP Group, discussed recent innovations in this space. [Editor’s note: Optical sorters are manufactured by all three of the equipment providers that presented at the Technical Forum and by numerous other companies around the world.] 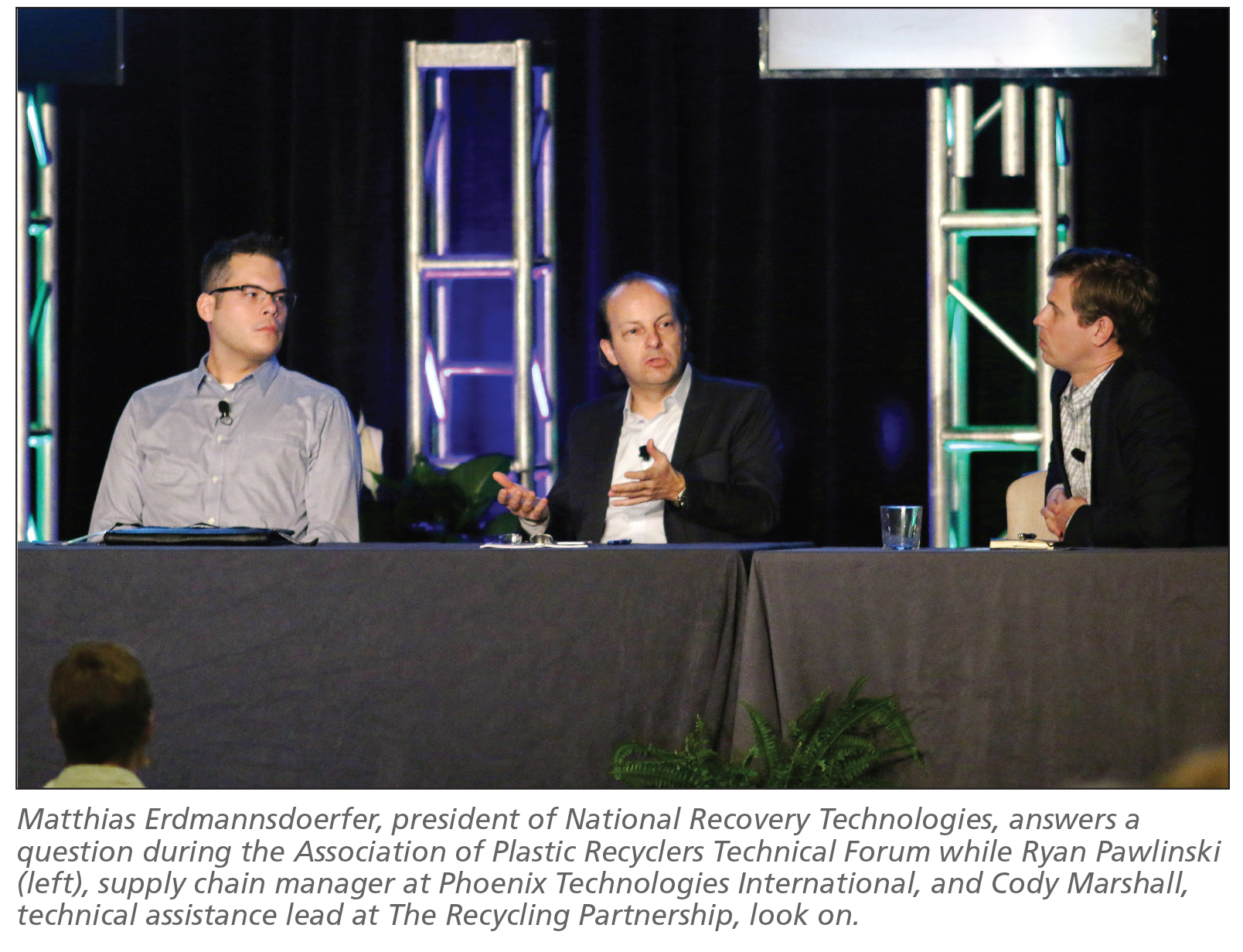 Some of the technology employed by many near-infrared (NIR) sortation devices uses more of the NIR wavelengths available to identify a larger range of plastic materials. Newer models of these devices are also able to handle properly presented materials at greater speeds and with greater accuracy than in years past. In addition, the pixel resolution of high-definition models is much higher.

Optical technology can certainly require a large capital investment on the part of a facility operator. But Hottenstein noted ways to ensure a purchase pays off. “Use the equipment as designed,” he stressed. He added that properly maintaining the equipment is important to lengthen its life span and maximize its effectiveness.

Keeping the bad stuff out at the MRF

As best practices, MRF operators should conduct community outreach efforts, alter the list of accepted materials and ensure the system is running only at its rated capacity. They should also conduct proactive maintenance on equipment, including routine star/disk replacements on screens and regularly train staff.

Lastly, certain cleanup devices can be added to better prepare material for the MRF container line. One such device is a fines screen with a suction system, which agitates the materials mix and removes fines and light material with air.

Another is a ballistic separator, a machine that, though rare in North America, has been shown in Europe to effectively separate two-dimensional fibers and films from three-dimensional containers while simultaneously removing fines. Neitzey said another way to accomplish 2-D/3-D separation is use of a paper magnet or air drum separator, devices that use a combination of air and a rotating shaft of paddles to remove film off the line, leaving a cleaned fiber stream in its wake.

Neitzey acknowledged adding cleanup devices isn’t a cinch. MRFs can find it difficult to squeeze them into existing building footprints, and they come with capital costs. Additionally, the MRF must schedule downtime needed to install the equipment.

Lastly, operators must still figure out how to handle the byproducts created by the equipment, he said. 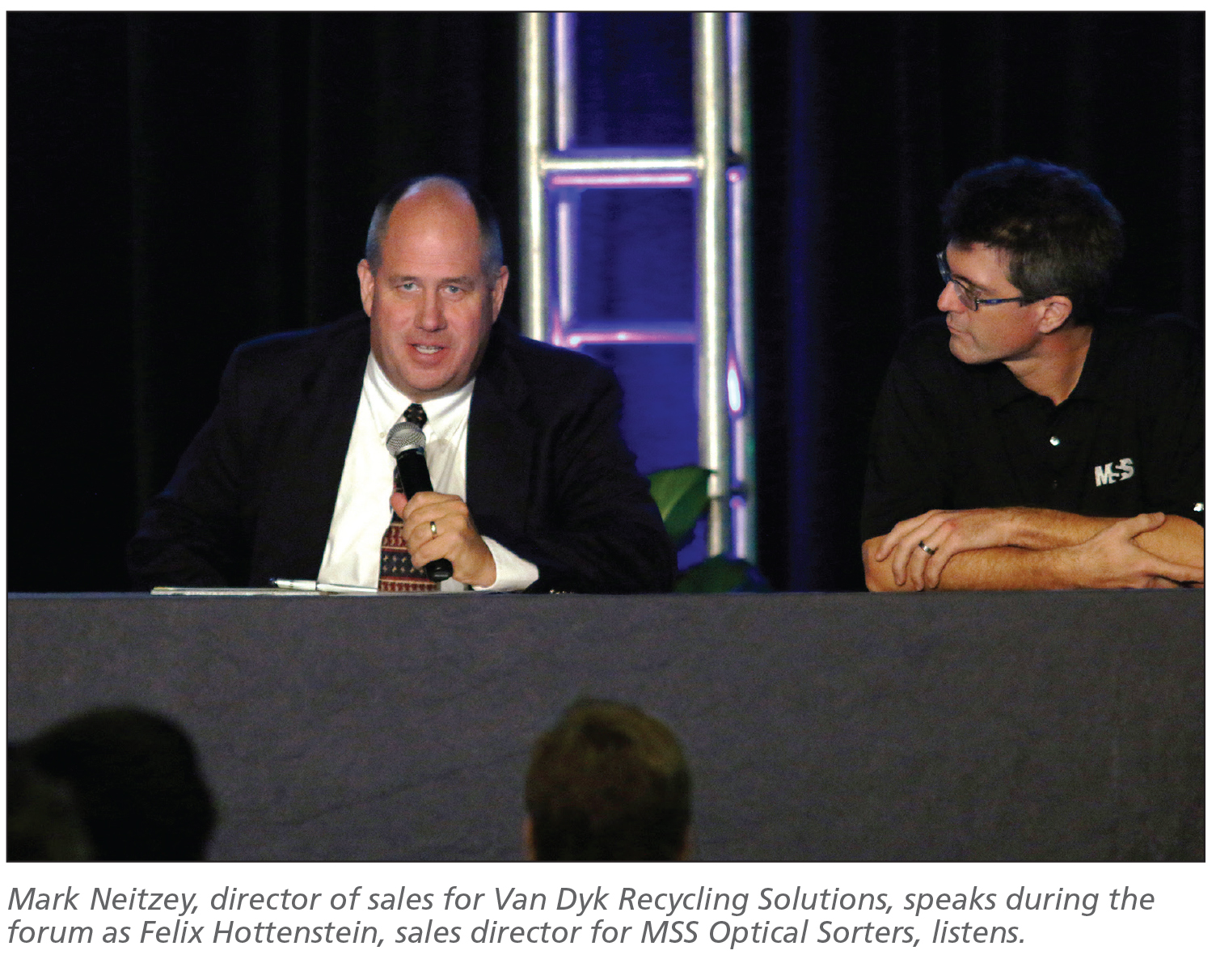 Recovery at the reclaimer

Ryan Pawlinski, supply-chain manager at Phoenix, which has sourced more than 1 billion pounds of material from around the world, discussed the challenges a reclaimer faces with today’s plastics stream.

Major brands are driving demand for recycled PET, asking for higher post-consumer resin content but at prices comparable to virgin resin. Yet higher recycled-content percentages can present challenges. Because the recycled resin can have a yellowing effect in clear packaging – a particular problem for thick-walled packages such as jars and cosmetic and pharmaceutical containers – it becomes more important to have a cleaner post-consumer stream.

Even clean water bottles can present challenges as they become more common in bales, Pawlinski said. That’s because they have lower internal viscosities, requiring more thermal processing to strengthen the plastic. But that process can harm the plastic’s clarity and brightness.

In addition, a multitude of packaging types exist today, and some include additives to boost shelf life or UV stability, as well as shrink-wrap labels and bright colors to boost shelf appeal. For example, full-wrap labels can require a reclaimer to use a label scraper, but that step can remove some of the bottle’s neck, resulting in a loss of usable PET.

Add to that lightweighting, thermoforms made of different resins and geographic differences in packaging types and MRF technologies. The result is lower bale yields and increased costs.

“There are things in these bales that we do not really want to see or focus on,” Pawlinski said.

Those contaminants increase the employees, equipment and energy needed to handle the same weight of material.

He used the example of a theoretical 1,000-pound bale costing 10 cents per pound, including freight. If Phoenix is only able to reclaim 64 percent of the bale, or 640 pounds, and the remaining weight is unusable, the effective price paid for usage PET increases to 15.7 cents per pound, Pawlinski said.

One recommendation offered was for reclaimers to work closely with brand owners to help them understand the impacts their packaging has on recycling. Pawlinski also suggested reclaimers communicate more regularly with MRFs to help them remove contaminants, which can often be done without adding equipment to the MRF.

He said reclaimers should invest in the newest technologies and keep employees up-to-date. Employee education can be simple. Phoenix created a “go/no go” line to show employees what’s acceptable and what’s not. It was simply a piece of plywood with examples of bottles on it, but the approach worked to increase quality significantly.