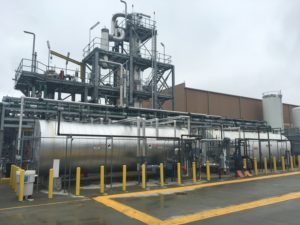 The leader of Vadxx Energy says his company is close to starting up a plant capable of consuming 25,000 tons of plastic material annually.

Vadxx CEO Jim Garrett said in an interview the company has completed construction of a roughly $20 million facility in Akron, Ohio that will take in plastics that would otherwise head to landfill.

The company will use a continuous-feed thermodynamic depolymerization process to generate diesel and naphtha fuels from the plastic feedstock (naphtha is a light fuel used in blends for gasoline and other products). The company calls its end product EcoFuel.

“We’ll be making our first commercial oil production in June, and we’ll have our first diesel and naphtha sales probably in August,” Garrett said. “Those will be limited volumes. We’ll be running at maybe 25 percent capacity. Then we’ll ramp it up to 100 percent capacity as of the first of the year.”

The nascent plastics-to-oil (PTO) space has been closely watched by plastics recycling stakeholders, in large part because PTO holds potential to offer an alternative to landfilling for hard-to-recycle plastics.

However, as U.S. shale gas production and other global market forces have recently caused significant decreases in oil prices, PTO operations have lost the economic edge startups in the space had been counting on.

Garrett of Vadxx said a steady climb in oil prices over the last several months brought the market back to a level where his company can be competitive.

“We do not need $100 [a barrel] oil,” Garrett said. “We’re comfortable with $50 oil for the long term, and as we speak, it’s at $47.55. We have been very disciplined to make the economics of this not just compare with but be better than incremental fuel supplies coming from traditional sources.”

Garrett likened his company’s thermodynamic technology to a teapot. Imagine an ice cube is placed in a teapot that’s sitting on a hot burner. The ice cube melts to become water and the water then turns to steam. If that steam is chilled, it turns back to water.

“The only difference with our operation is our ice cube is waste plastic and our water is EcoFuel,” Garrett said. “It’s a little more complicated than that, but that’s the basis of the technology.”

Garrett said the company will be using post-industrial plastics sourced from Ohio and surrounding states as it begins commercial production this summer. He would not offer more specifics on the makeup of that feedstock, but he noted a Vadxx pilot facility had successfully created fuel from a variety of resins pulled from post-consumer and post-industrial streams.

He also said the company is not paying for material, instead finding arrangements with suppliers to take loads at a cost that is lower than what those suppliers would pay to send the plastics to landfills in the region.

“There are a bunch of variables – yield from feedstock, landfill cost, transportation cost – so I never like giving a hard and fast rule,” Garrett said. “But, generally, we are not interested in paying for material.”

Garrett added that Vadxx is also eyeing the possibility of opening more plants once the Akron operation is running at full capacity. The company is looking for potential investors to help fund that growth.