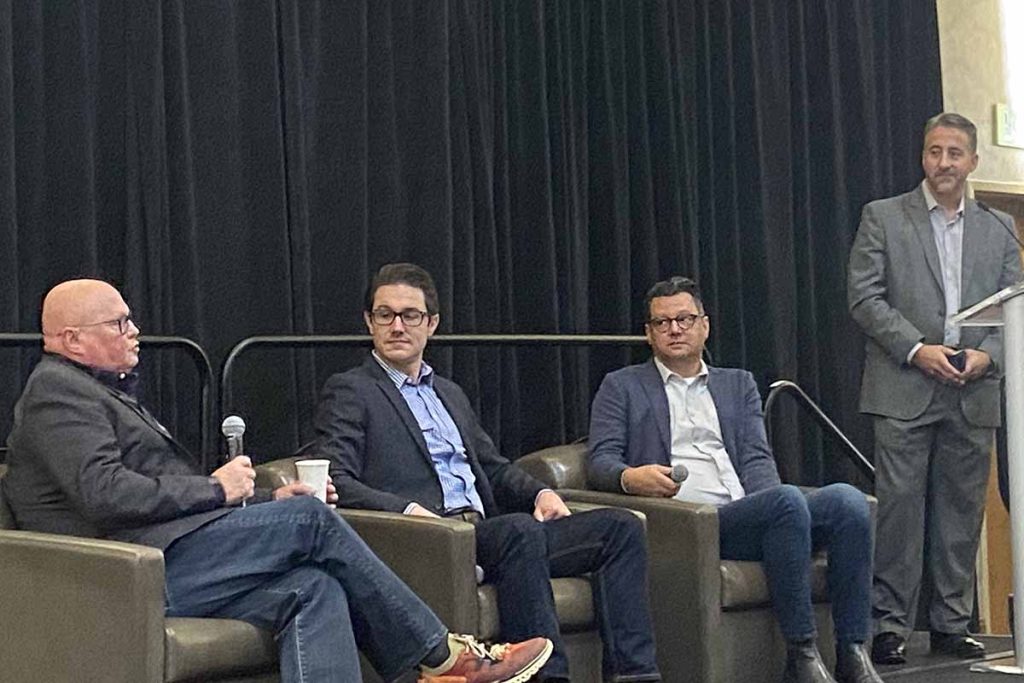 Leaders from Dell, Google and Samsung laid out details this week on how their companies are building strategies around repair, device longevity and more.

The tech company representatives were brought together for a panel at the 2022 E-Reuse Conference, held Nov. 14 through Nov. 16 in Denver. All said they are focusing on efforts that move well beyond simply collecting end-of-life products for recycling.

The work isn’t resulting in a new computer model sold to consumers. Instead, the initiative served to spark innovations that can be integrated across the Dell product portfolio in different ways.

The advances include a motherboard that’s 75% smaller, a fanless system that reduces overall power needs, a “keystone” innovation that locks components in place without adhesives, and 10 times fewer screws than current laptop models.

“It’s making a lot of teams at Dell question what they’ve been doing for the past 20 years,” Tosh said.

Corey Dehmey, the executive director of SERI and the panel’s moderator, set the table for the “Driving Circularity Through the Electronics Lifecycle” panel by sharing data on the carbon-related benefits that come from keeping devices in use longer.

He noted that if an individual user were to replace their laptop every five years instead of every four years over a 20-year period, CO2-equivalent emissions related to that person’s hardware would drop by 15%.

“Multiply that to a company that has 50,000 or 100,000 employees and its ITAD program,” Dehmey said. “To get in front of the problem, we have to make better decisions throughout the life cycle, all the time.”

The notion of a longer product life span is central to a new software initiative from Google called Chrome OS Flex, a cloud-based operating system that helps extend the lives of older devices.

The initiative comes as the search giant continues to place a larger focus on its Pixel hardware line.

The Flex OS updates just as frequently as the company’s Chrome browser, essentially giving the device a system-wide tune-up.

Part of Google’s goal is to address devices that are in “hibernation,” a term Shackelford used to describe electronics that are no longer being used but are still in possession by their owners.

Flex could allow an individual to continue using the product even if its original OS is no longer being supported or is causing slowdowns. It also could allow for longer use in secondhand markets.

“One of the reasons Google went all-in on this is that we know our users come from all backgrounds,” Shackelford said. “Taking something that was maybe in storage and could now run for another three to five years would open new pathways.”

Tosh of Dell said the OS development from Google dovetails well with some of the longevity targets his team put together during Project Luna.

“I’m really excited about Flex,” Tosh said. “Our goal was to get to nine years of life from the motherboard and display. Some of the products were limited by Windows’ capability.”

‘It’s all about choice’

Samsung, meanwhile, has been engaging in work to more effectively get used devices out of drawers and closets and into the recycling and repair streams.

Paul Walker, the company’s senior director for customer service in North America, said the manufacturer has built a network of 1,700 retailer collection points for used devices.

Some of the expansion of that collection network is tied to Samsung’s recent launch of an independent service provider program, which gives repair companies not authorized by Samsung access to critical parts and tools. Technicians in the program must be certified to the WISE standard from wireless industry group CTIA.

That effort rolled out along the same time as Samsung’s partnership with iFixit to open the door to more self-repair for consumers.

Walker said Samsung has put a priority on evolving the way it thinks about repair and collection.

“We’ve moved from a monolithic returns model to one that’s all about choice,” he said. “It allows us to get a product back and reuse it from those points of access.”

Walker added that an important next step is working to help consumers understand that no one wins when an old device is collecting dust.

“You put it in the drawer and you forget about it,” he said. “It’s difficult to convey there is value in your drawer. There is some responsibility in that drawer. And thirdly, you can move that device to somebody else. As an industry, I don’t think we’ve done enough on public awareness.”