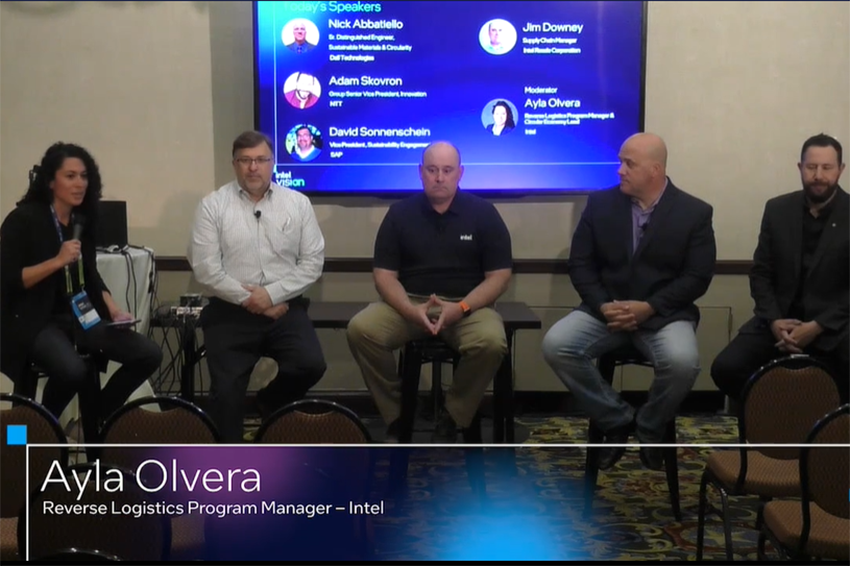 Reverse logistics efforts from OEMs could prove to be a strong force in the circular economy. | Screenshot of Intel Vision 2022 session

Large OEMs can lead the way to a circular economy if they work together and prioritize reverse logistics, panelists at Intel’s Vision 2022 conference said.

The “Circularity Opportunity” session at Intel Vision 2022, held Wednesday May 11, featured speakers from OEMs, businesses services companies and software development companies. They discussed how moving toward a circular economy is a business opportunity and what it will take to get there.

Moderator Ayla Olvera, a reverse logistics program manager at Intel, said the circular economy can yield up to $4.5 trillion in economic benefits by 2030, “so there is a lot of opportunity that exists.”

Olvera said no one company can make the transition to a circular economy by itself.

“The only way forward is by uniting our initiatives and programming,” she said.

Nick Abbatiello, a senior engineer at Dell Technologies, agreed that “you can’t do this alone.”

Dell’s electronics return programs will take any brand back, he said, and as far as collaborating with competitors, “there’s nothing that’s off the table.” The company’s Asset Recovery Services program recently expanded to 36 countries, and Dell launched an all-in-one Dell Lifecycle Hub.

The panelists spent much of the session talking about the importance of reverse logistics in a circular economy.

“Make reserve logistics part of the business model,” he urged attendees. “Large or small, there is the economics-of-scale aspect. If you’re at the end of the chain in a customer-facing chain, you think, ‘Oh, I don’t have anything to do with circularity because I don’t make these products,’ but you’re actually the beginning of the reverse chain.”

Abbatiello said Dell has the infrastructure in place to fully sanitize data from old devices, but the problem is getting items back from consumers.

“We’ve been trying to figure out how to get more Notebooks to recycle them and use that material, and we can’t find them,” he said. “We’ve reached out to collection companies all over the world. We’re pretty sure it gets refurbished once, but then we don’t know where it goes. Maybe it’s in your house. Maybe you have four or five stacked up.”

Dell is exploring the idea of offering people money for trading in old devices when they buy a new one, similar to what many companies already do with cell phones, Abbatiello said.

Sonnenschein highlighted that “what everybody is saying up here is there is more inherent value than the end consumer believes.”

Adam Skovron, senior vice president of new ventures and innovation at business solutions company NTT, added that if the right incentives and reverse logistics are in place people might be more inclined to trade in a device before it’s worn out.

Skovron said with that goal in mind, it’s important to build solutions that consider circularity from the outset, including raw materials.

SAP’s Sonnenschein said a successful reverse logistics chain and circular economy also depends on both producer and consumer education, “getting people to understand how much we’re leaving on the table” when items are not circular.

He said even SAP’s most forward-thinking customers need to shift their mindset to get into a circular frame of reference.

“I use the word transformation,” he said. “This is a major shift for these companies. Most people who are fantastic at their jobs have never thought of this issue.”

“It’s up to the companies to set the directions and it hopefully pulls the rest of the industry,” he said, adding that when larger companies build out the circular supply chain it makes it easier for smaller companies to participate.

“You need to be consistent with your strategy,” he said, and plan for four to five years of building time.