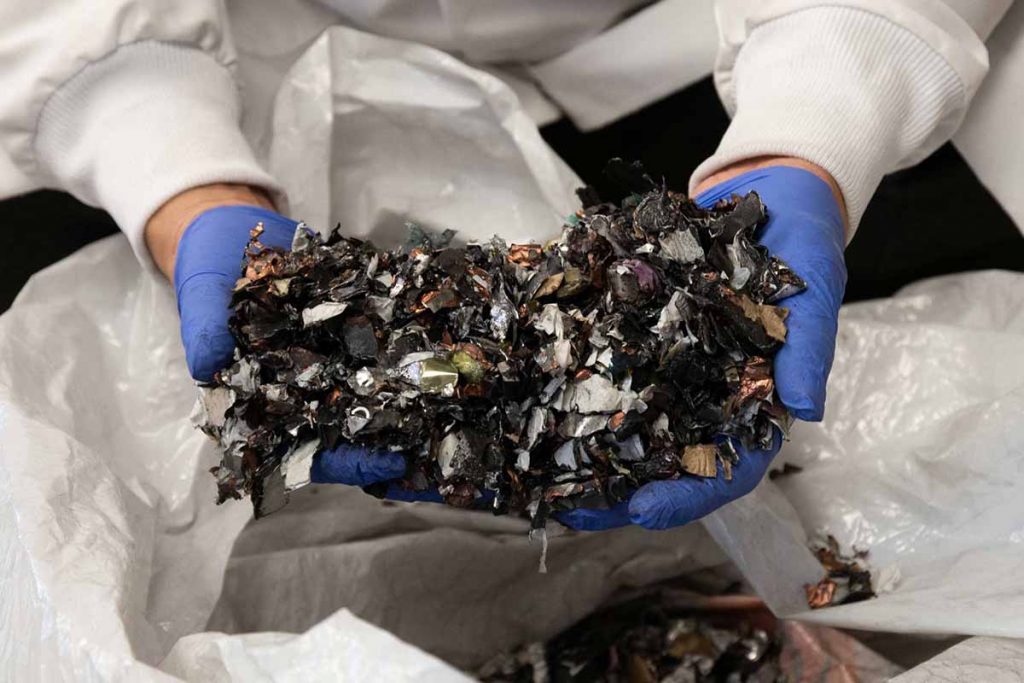 Shredded batteries at the Princeton NuEnergy facility in Bordentown, N.J. | Molly Seltzer, Andlinger Center for Energy and the Environment. Courtesy of Princeton University

Here is a roundup of recent battery recycling news:

The funding will help Nth Cycle build a sustainable domestic supply of cobalt and other critical minerals. The project received an SBIR Phase I award in 2019 for $225,000 and recently received $12.5 million in Series A financing to help it deploy its technology commercially.

The Beverly, Mass.-based company developed a process called electro-extraction to recover critical minerals such as cobalt and nickel using electricity and carbon filters.

Wistron GreenTech, the electronics recycling arm of manufacturer Wistron, is collaborating with a startup from Princeton to recycle lithium batteries more efficiently and at a lower cost.

Chao Yan, co-founder and CEO of Princeton NuEnergy and a postdoctoral research associate in the Department of Mechanical and Aerospace Engineering, said in a press release that his company upgrades and renews the cathodes themselves in a form of direct recycling, instead of using chemicals and high-temperature, energy-intensive processes to break down spent batteries to their elemental components.

That’s accomplished by using low-temperature plasma, a reactive ionized gas that removes contaminants from the cathode powder without destroying it.

The team’s method recovers much of the structure and composition of the used cathode, along with cobalt and lithium, and creates a fresh cathode material that uses about 70% less water and 80% less energy, according to the press release.

David Klanecky, CEO of Retriev Technologies, said the “combined assets and talented team enable us to be the only player in the industry that has the capability to collect, transport, sort and process every type of battery at every touchpoint from the end of one life cycle to the beginning of another.”

The scrap material will be recycled at Ascend Elements’ new 154,000-square-foot facility in Covington, Ga., which can recover 98% of battery materials.

“People often think lithium-ion battery recycling is just for end-of-life batteries, but waste from the battery cell manufacturing process is the biggest segment of the battery recycling market right now,” Michael O’Kronley, CEO of Ascend Elements, said in a press release. “SKBA is embracing sustainability and reducing its impact on the environment by recycling every bit of scrap battery material it produces.”

Ascend Elements was previously known as Battery Resourcers. It raised $90 million in 2021 to expand its battery recycling and cathode manufacturing operations.

Recycler Primobius and LICULAR, a wholly owned subsidiary of Mercedes-Benz, have signed a memorandum of understanding to partner on battery recycling, to start in 2023.

By combining mechanical and hydrometallurgical processes, Primobius can create high energy efficiency and high recovery rates for the metals and valuable materials in batteries, the press release said.

Mercedes-Benz plans to build its own battery recycling factory in Kuppenheim, Germany with Primobius as the technology partner, according to the press release. The planned carbon-neutral facility will have an annual capacity of 2,500 tons.

Jörg Burzer, member of the board of management of Mercedes-Benz Group, said the company’s goal is a “maximum circular economy for all raw materials used,” and sustainable battery recycling is a key factor of that.

Mercedes-Benz will be the first automotive manufacturer to operate its own recycling plant that uses hydrometallurgical treatment in Europe, the press release said, and is aiming for recovery rates of over 96%.

Li-Cycle has received key environmental permits for its planned Rochester hub, a hydrometallurgical battery resource recovery facility slated to be commissioned in 2023, according to the company.

In March 2022, the New York State Department of Environmental Conservation issued an air permit for the Rochester hub, allowing construction of permanent infrastructure to begin, a press release said.

The company is also nearing startup at its Arizona and Alabama spokes, which will go on-line in the second quarter and third quarter of 2022, respectively. Those two spokes will be the first facilities to use the company’s proprietary EV battery pack processing technology and will have an annual processing capacity of up to 10,000 tons per year, the press release said.