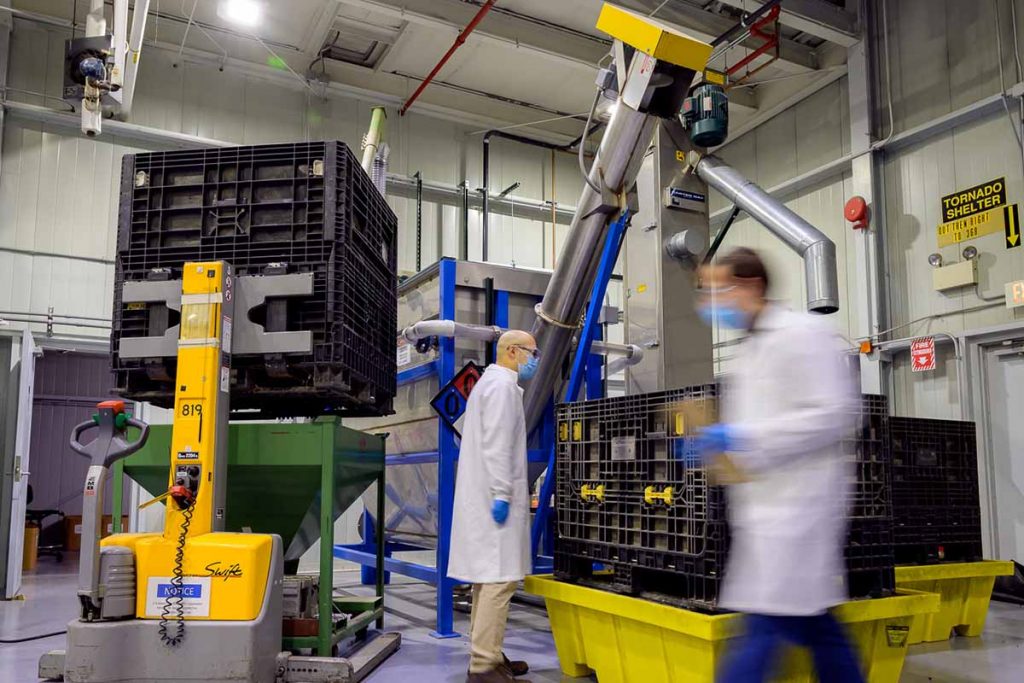 Scientists at a U.S. Department of Energy lab have developed unique tools that can be used to clean up shredded e-scrap, and they want to demonstrate them to e-scrap processors.

Argonne National Laboratory officials developed techniques that can be used to separate e-plastics polymers and clean up e-scrap metals streams. The wet-based separation processes allow materials to be sorted by density in float-sink tanks without using salts.

“Effectively, what we have is an opportunity where we have internal funding to demonstrate this technology for potential industry partners who are interested in licensing technology,” said Jeff Spangenberger, group leader for materials recycling at Argonne National Laboratory, which is near Chicago. “Ultimately, I’m looking for people, companies, that would like us to demonstrate our equipment to see if we can increase the value of their either waste streams or a product stream.”

In an interview with E-Scrap News, Spangenberger explained the processes were developed years ago as a way to recover materials from auto shredder residue. But the researchers also wanted to see if the separation techniques work with e-scrap and other streams.

In a way, the technologies involve modifications to current float-sink techniques, which can be used to sort mixes of plastics, metals and other materials coming off the end of a shredding and separation line. In float-sink tanks, heavier materials sink to the bottom and lighter ones float.

A number of North American e-scrap processors and plastics reclaimers have installed float-sink systems to improve the quality of the plastics coming out of their shredders, as well as to recover metals that would otherwise be shipped out with mixed plastics. They include BoMET Polymer Solutions, eCycle Solutions, Owl Electronic Recycling, Plastic Recycling, Inc. and Universal Recycling Technologies. Many cited tighter export market specifications in their decision to invest in equipment.

Often, salts are used in the float-sink systems to increase the density of the water, which allows for separations that wouldn’t otherwise be possible in straight water. For example, ABS and HIPS, which are common e-plastics, sink alongside metals, glass and other heavier materials in unmodified water. But if enough salts are used, those styrenic polymers will float.

Argonne National Lab scientists developed two wet-separation processes to eliminate the need for salts. One is called froth floatation, which has been used in mineral processing for years. Through that process, some materials are made to be hydrophobic and others hydrophilic. When air is introduced, the hydrophobic materials stick to the air bubbles and float to the surface, Spangenberger explained.

The other process is similar to elutriation, in which rushing air skims off lighter materials, but it uses a velocity of water to help separate materials.

Researchers have taken samples of shredded e-scrap through the sorting processes, which work well on low-grade scrap such as shredded printers, Spangenberger said. The techniques can be used to produce a clean fraction of styrenics (HIPS, ABS and PS) for sale, he noted. It can be used to remove metals that weren’t captured by magnets or eddy current separators and end up with the shredded plastics.

And the processes can be used to clean up metal fractions sold to smelters. For example, aggressive settings on eddy current separators can result in plastics and rubbers being ejected with nonferrous metals.

“This can help get some of the contaminants away from the metal stream so you don’t have to deal with that, and you’re not shipping all this junk,” Spangenberger noted.

Spangenberger said he wants to process samples of e-scrap from electronics recycling companies. He envisions running smaller samples to start – maybe 100 pounds – and then perhaps advancing to large-scale trials of 10,000 pounds, he said. He has funding available to perform large-scale demonstrations for two electronics recycling companies, he said.

The ultimate goal is to license the technology so it can be widely used to improve recycling, which recovers the energy that went into making the materials, he said. Interested e-scrap processors can email Spangenberger at [email protected].