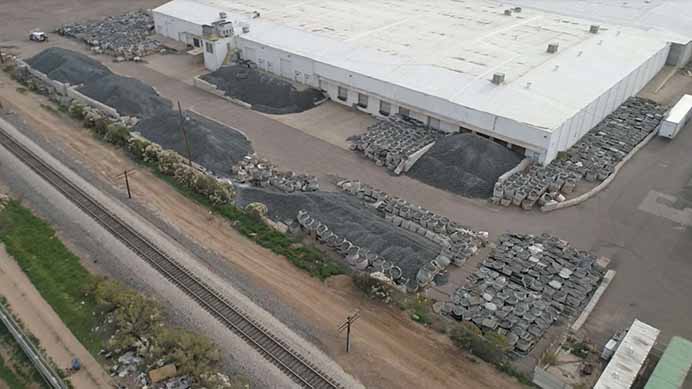 In recent months, crews have cleaned up nearly 40 million pounds of CRT materials at former Closed Loop locations in Phoenix, including millions of pounds of leaded glass that sat outside for years.

The Arizona Department of Environmental Quality (ADEQ) recently provided E-Scrap News with an update of the cleanup activities, which are being led by property owners under ADEQ’s Voluntary Remediation Program.

The projects were necessitated by the failure of Closed Loop Refining and Recovery, which accumulated hundreds of millions of pounds of CRTs in Arizona and Ohio before closing in 2016. Removal of an estimated 158 million pounds of CRT materials is ongoing at three Columbus, Ohio warehouses that Closed Loop leased.

In Phoenix, materials were abandoned at several sites, including two warehouses and an Arizona Department of Transportation (ADOT) property. ADOT has already cleaned up the roughly 42 million pounds that was abandoned on its land.

Now, crews hired by landowners are in the midst of cleaning up over 50 million pounds on two privately owned sites: a South 27th Avenue warehouse and a six-acre South 59th Avenue property. According to the state, the glass is all going to landfills, some as hazardous waste and some as non-hazardous waste.

Attorneys representing the landlords – Lincoln Industrial, Berendo Property and Harrison Properties – did not respond to E-Scrap News inquiries for additional information on the cleanups, including who is paying for the activity.

Owned by Berendo Property and Harrison Properties, the six-acre 59th Avenue site has material stored both inside a warehouse and outdoors.

Property owners are focused on cleaning up the estimated 34.22 million pounds of outdoor material first. Most of that material is in piles, but some is also stored in gaylords. And most of the material is on asphalt or concrete, but some also sits on bare soil, covering an estimated 62,000 square feet of unpaved surface, according to a cleanup plan from consulting firm Wood Environment & Infrastructure Solutions.

Work began in December 2020. As of May 2021, crews have removed and disposed of about 67% of the outdoor material, said Caroline Oppleman, ADEQ’s communications director.

According to the cleanup plan, loads are being tested to determine whether to send the material to the US Ecology hazardous waste landfill in Beatty, Nev., about 400 miles away, or Republic Services’ Southwest Regional Landfill, a non-hazardous waste facility in Buckeye, Ariz., just over 40 miles away.

About 60% is going to Republic’s non-hazardous landfill, and the remainder is headed to US Ecology’s hazardous waste landfill, according to ADEQ, which anticipates all exterior CRT removal to be completed in July.

After CRT materials are removed, crews will test, remove and dispose of around 1 million pounds of contaminated soils either at a hazardous waste or non-hazardous-waste landfill, depending on what testing shows in terms of metals concentrations, according to the cleanup plan.

The warehouse cleanup and decontamination will be part of a separate project, which will also be reviewed and approved by ADEQ, Oppleman said. 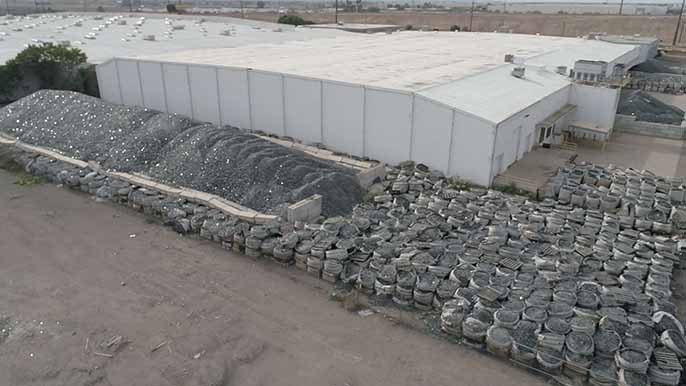 Owned by Phoenix-based company Lincoln Industrial, LLC, this warehouse contained an estimated 16.44 million pounds, made up mostly of processed CRT materials with a smaller amount of unprocessed CRTs, according to Oppleman and a January 2020 cleanup plan from Wood Environment & Infrastructure Solutions.

Removal of material began in October 2020 and finished in March 2021. Oppleman said all of the glass went to US Ecology’s hazardous waste landfill. There, the lead-containing material is treated via a “microencapsulation process” before disposal, according to US Ecology’s website.

Crews began decontaminating the building in May 2021, and the work is expected to be done in July, Oppleman said.