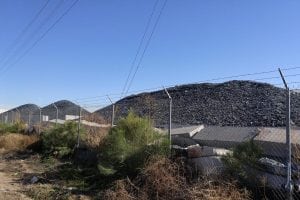 Major CRT tonnages left behind by Closed Loop Refining and Recovery sit in warehouses in Arizona and Ohio as regulatory and legal action continues.

According to updated records provided by the Arizona Department of Environmental Quality (ADEQ), Closed Loop is now believed to have left behind an estimated 158 million pounds of CRT glass at five sites in Arizona. ADEQ records shared with E-Scrap News at the time of the company’s closure in 2016 indicated there were just 55 million pounds in storage.

While there appear to be efforts underway to begin clearing out some of the locations, only one site, containing less than 1 million pounds of CRT glass, has been cleaned out. The state is now pushing for landlords to take action.

“ADEQ is having ongoing discussions with all property owners to ensure material stored at each facility is removed and disposed of in a responsible and legal manner,” said Erin Jordan, an ADEQ spokesperson.

In Ohio, meanwhile, Closed Loop left 128 million pounds of material at its former Columbus headquarters, according to a federal suit filed last year by the company’s former landlord. Court documents filed late last month reveal that settlement negotiations are ongoing with some of Closed Loop’s suppliers, who were also sued by the landlord. But the court records show no agreement has been reached to fund the multi-million-dollar cleanup.

A separate Closed Loop location in Columbus has additional material in storage. According to Ohio EPA records, 40 million pounds of CRT glass remain on the premises, meaning the combined Ohio stockpiles amount to 168 million pounds of material awaiting management.

“To our knowledge, no waste has been removed from either of the facilities,” Ohio EPA spokesperson James Lee said in a statement.

All told, records from Arizona and Ohio indicate Closed Loop left behind 326 million pounds of CRT material when it closed in 2016.

According to officials in Arizona, the state now believes the onus is on Closed Loop’s former landlords to remove the 158 million pounds of material the company left behind in that state. The former landlords include the Arizona Department of Transportation (ADOT), which owns one of the processing sites Closed Loop leased.

Jordan said ADOT is in the process of securing internal funding to remove just over 42 million pounds of CRT glass at the site.

The one Arizona stockpile that has been handled contained 966,000 pounds of glass, according to ADEQ. It was cleaned out by a landlord.

ADEQ’s website, which was updated following an inquiry by E-Scrap News, offers more details on the former Closed Loop sites.

Jordan said the effort to get landlords to act has been the result of Closed Loop being unable to follow a May 2015 order to remove the material.

“For a variety of reasons, including claims of financial hardship, Closed Loop failed to meet the requirements of the administrative order,” Jordan said. “ADEQ then engaged the owners of the facilities for removal and disposal.”

Jordan said the last time the agency communicated with Closed Loop was about a year ago.

“At this time, we are focused on addressing [cleanups] with the owners of the facilities,” she added.

Nearly a year after suing Closed Loop and its former suppliers for running what it called a “sham recycling operation” in Ohio, the company’s former landlord, Garrison Southfield Park, is engaged in settlement negotiations.

According to a May 26 filing in U.S. District Court for the Southern District of Ohio, the company has been negotiating with key suppliers Kuusakoski Inc., Kuusakoski-owned company Vintage Tech and UNICOR (the trade name for Federal Prison Industries) as well as additional unnamed former partners of Closed Loop.

“The objective of these negotiations is to recover costs to fund the removal and remediation of wastes in Garrison’s warehouses,” the filing states.

Closed Loop’s former leaders, David Cauchi, Brent Benham and Brian LaPoint, are representing themselves in the case and are not mentioned as being involved in the ongoing negotiations. They did not respond to requests for comment from E-Scrap News.

Garrison Southfield Park has been seeking $14 million from Closed Loop, Kuusakoski, Vintage Tech and UNICOR to cover the costs of the cleanup. The firm has already won a separate $18 million lawsuit against Closed Loop but has been unable to recoup any of the funds from it, according to the current lawsuit.

It’s also unclear when the additional Columbus, Ohio site, which is not a part of the Southfield lawsuit, will be cleaned up. Ohio EPA determined in April 2016 that Closed Loop had been speculatively accumulating CRT glass at the location.

It is not clear whether the settlement will pave the way for the 40 million pounds currently at the site to be removed. An attorney for Olymbec did not respond to E-Scrap News requests for comment.