How COVID-19 has affected ITAD and data destruction firms 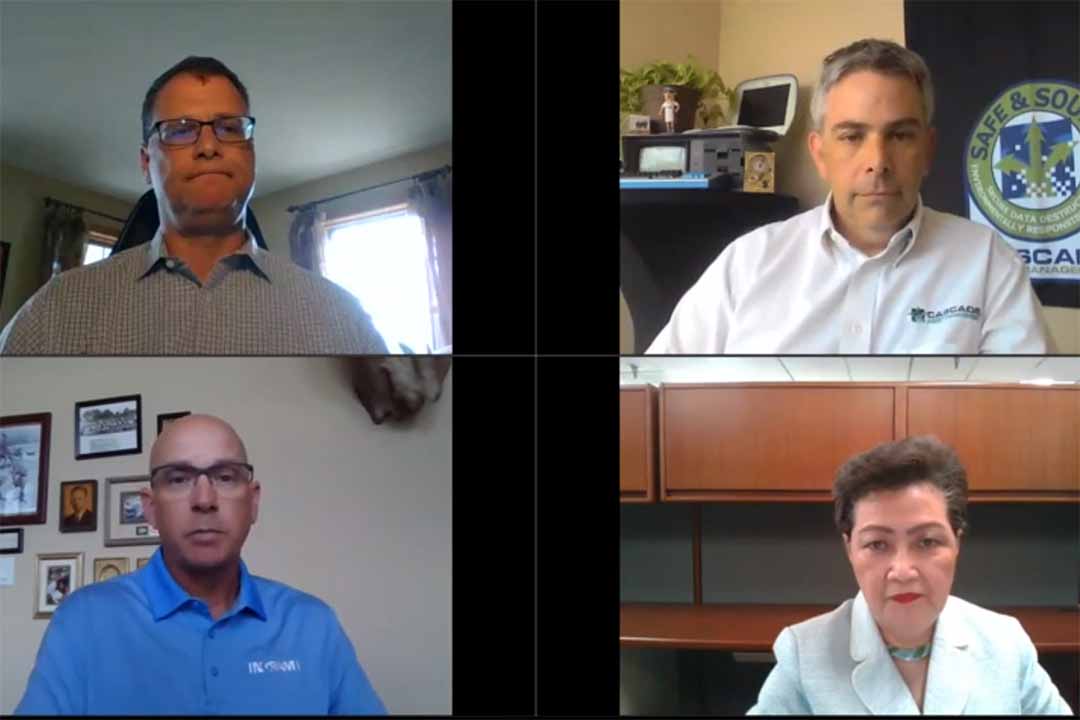 The pandemic has forced the ITAD industry to adapt to survive. Experts from three processors recently described that sudden evolution and what it means for the future of data destruction services.

“You’re going to see the evolution of ITAD,” said Brent Berry, executive director of ITAD and reverse logistics at Ingram Micro. “I mean, this is going to drive us to another level of automation and non-touch work environment that we would not have had happen for the next 10 years, because out of necessity we’re going to get pushed into that direction.”

Berry was one of three speakers on a recent webinar from the International Secure Information Governance & Management Association (i-SIGMA), the parent organization for the National Association for Information Destruction (NAID). The July 23 webinar focused on what the ITAD industry and, in particular, electronic data destruction services, will look like coming out of the pandemic.

Also presenting were Jade Lee, president and CEO of Chicago-area Supply-Chain Services (SSI), and Neil Peters-Michaud, CEO of Cascade Asset Management, which is based in Madison, Wis. and has a second location in Indianapolis. The conversation was moderated by Joseph Harford, president and founder of Reclamere, an ITAD and data security company based in Tyrone, Pa.

The following are some major takeaways from the webinar:

Importance of diverse customers and services: Coronavirus-driven business closures made clear the importance of having a diversified customer portfolio, especially “essential businesses,” Lee said. “More than ever, we need to identify more customers that can fit into the essential service business sector,” she said. And that list goes beyond hospitals and banks – SSI has major customers that are considered essential because they provide equipment and services that are crucial to running medical centers, even though they don’t provide medical equipment, per se.

Additionally, Lee emphasized the importance of having diversified business service offerings. In addition to ITAD, recycling and data destruction services, her company provides supply-chain-related service. It’s a competitive market, but when the recycling and ITAD sectors are down, the supply-chain business can be helpful, Lee said.

Varied customer responses: During the first quarter, some of Cascade’s customers recognized early that the pandemic was going to be an economic threat, Peters-Michaud said. Others were slow to recognize the danger. Customers that worked in international markets particularly recognized the potential impact to business in the U.S., he said. Some large enterprise customers stopped or reduced their retirement of IT assets because those companies were having trouble getting new equipment from China, which was shut down in an attempt to slow the spread of the virus.

“They contacted us – this is back in February – saying, ‘We can’t send you our product because we need to hold onto it, and then anticipating we might have some work-from-home needs,'” Peters-Michaud said.

Other customers were ready to launch large nationwide IT asset retirement projects and had no idea COVID-19 would impact them so much. “So it was interesting that some enterprises recognized that this was going to be a major event that disrupted business, and others it wasn’t until the stay-at-home orders came in March and April that they really realized ‘OK, this is serious,'” Peters-Michaud said.

Lee said SSI in late 2019 and early 2020 landed several new customers with national data center equipment refresh programs. Those customers planned to have SSI manage the equipment in March. But March came and SSI didn’t hear from them, Lee said, and when SSI followed up, the processor learned the projects had been diverted because the companies had more immediate pandemic-related concerns to deal with. Fortunately, SSI was able to rely on existing customers working with essential services, and SSI was able to avoid layoffs and furloughs, she said.

From the office to homes: Many large enterprises used to have 25% of their staff working remotely and 75% in a building; today, that’s flip-flopped, Berry said, and other big companies are saying they’re not going back.

When you go from a large company with 10,000 employees in one location to each of them working from home, that’s a “game changer” for the ITAD industry, he said.

In response, Ingram Micro has worked to diversify its services beyond traditional ITAD functions to help customers manage through the pandemic, he said. That includes providing depot services, box programs, and remote data erasure. With their workforces dispersed, those customers want to partner with only one or a couple different vendors to provide more of the services those customers previously managed in-house, he said.

That being said, there are still a lot of unknowns about the future market.

“To me, there’s no red or green answer, right?” Berry said. “There’s a yellow right now, because we’re still learning our way through this process and figuring all these different motions out.”

Data security in shipping: Because of the pandemic, corporations have delayed their equipment refresh projects, and, as a result, SSI is seeing less material in each load. Lee’s company is receiving 4-6 skids of material in loads that used to have 10-20 skids.

That brings data security implications, said Lee, whose Lombard, Ill. company was among the first service providers to receive NAID hard drive sanitization and physical destruction certification over a decade ago.

Larger batches can be shipped by the truckload, with a seal used to secure the trailer. But it’s not cost-effective to ship only 4-6 skids that way; however, when shipping on a less than load (LTL) basis, the pallets go to a transfer station, where they’re unloaded and reloaded into another truck. Throughout that process, you don’t know who the transportation station workers are, and there’s a risk customers’ pallets could get mixed up with others.

“This has raised a lot of concern among the corporate customers,” Lee said. One way to address the issue is by providing data destruction services locally before the material is shipped, she said.

Remote and on-site data destruction: Speakers discussed the practice of remotely erasing customers’ data. Lee agreed ITAD companies need to develop automated processes such as remote data erasure, but she warned that some customers don’t like the idea of giving an ITAD vendor electronic access to their systems.

She suggested one way to address the problem is to provide HD shredding on site, before shipping.

“This is the critical role that NAID-certified hard-drive-shredding service providers can serve as key partners to ITAD companies,” Lee said.

In such an arrangement, ITAD companies will need those subcontractors to have the ability to safely and carefully remove drives from desktops, laptops, servers and storage units, in case the equipment generators no longer have manpower to do that work themselves, she said. That might be new to some HD shredding service providers. Additionally, they should be able to verify or record serial numbers and palletize equipment by different device types, she said. Lastly, ITAD providers would love to have “preferred partner pricing” from the NAID-certified shredding companies, she said.

Berry agreed that partnerships are going to be critical. Even if an ITAD firm remotely erases a laptop’s data, there are benefits to using a local partner to transport that asset to a nearby facility to be shredded, he noted. Ingram Micro finds partners in regions where the company doesn’t have facilities; it has to, because customers want their assets to travel five miles, not 100 miles, Berry said.

What the future may hold: Peters-Michaud said the near term will bring ITAD business opportunities from – unfortunately – mass layoffs around the country. That will mean a lot of equipment will need to be handled securely.

“It’s really unfortunate for the economy, but that’s something we need to be able to come in there, help people out from a security standpoint, protect their reputation, turn that equipment into cash for folks,” he said.

Meanwhile, future ITAD staffing is a wildcard, Berry said. Because of government monies that are available, there’s a natural labor shortage in the ITAD space, he said. As a result, it takes longer to onboard employees, which could mean it’s difficult to add staff quickly to manage a future wave of material, he said.

He also emphasized that customer education will be important. If an ITAD firm has a customer with 10,000 desktop computers, and the customer decides to sell them all on the secondary market in one swoop, it hurts everyone in that space, he said. Yet sitting on those assets isn’t the answer, Berry said.

Peters-Michaud said the future is going to be tough.

This is not a short-term project. This is a long-haul game,” he said. “We don’t know when the end is in sight, which is the worst thing for businesses, the uncertainty.”